What will the new Iranian satellites be imaging?

Iran is soon to launch two satellites which will reportedly take images "with a high degree of accuracy of less than 10 meters" (azernews).

What will these satellites be imaging?

Since the best information we have is quoted from a news article, this is going to be an exercise in speculation and deduction. First, let's assume "a high degree of accuracy of less than 10 meters" puts the possible spatial resolution range at 10-30 meters or so (note: I'm going on the assumption that the use of the term "accuracy" is just typical misreporting, and what they're really referring to is "resolution"). What does this buy you? The below image from this nifty website will help visualize: 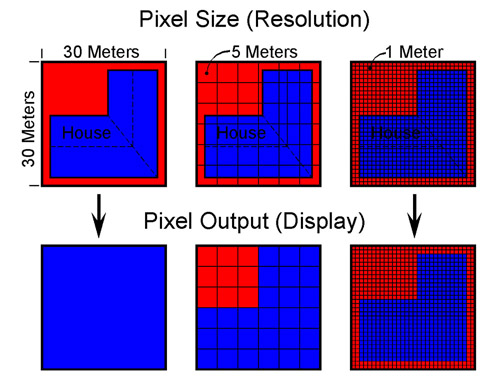 Now, while there are certainly things larger than a house that are of military interest, this will not exactly provide you with detailed intelligence - you could do much better with Google Maps, for instance, whose high-resolution imagery is <1 meter.

So... what's the point? Well, there are plenty of other things you can do with satellite imagery. The SPOT-5 satellite has similar resolution, and is marketed as

a key asset for applications such as medium-scale mapping (at 1:25 000 and 1:10 000 locally), urban and rural planning, oil and gas exploration, and natural disaster management.

If you happen to be collecting multispectral imagery, you can do even more interesting things, particularly in the name of science. NASA's LANDSAT imagery is of even lower spatial resolution, but is very information-rich, as it does not include only visible light.

The small size of Iran's satellite (<50 kg according to the article) indicates that it may be more of a technology demonstration mission as opposed to a large, mature, operational system, which makes sense. While a domestic satellite imagery capability is obviously of interest to a country like Iran, there are no doubt several other components, systems, and processes that will be demonstrated, all in the name of technological maturation.

Not the answer you're looking for? Browse other questions tagged artificial-satellite future-missions optical iran or ask your own question.

10
How are long space travel times motivated? (17 year Europa mission)
39
Why are the GPS constellation satellites in such a high orbit?
0
How will GOES-R simultaneously point some instruments down at Earth and others sunward?
5
How were the 10 Iridium NEXT satellites deployed by SpaceX?
4
How exactly are satellites drifted to slots in different orbital planes?
5
Can image-stacking allow this 0.25 m satellite telescope achieve 0.65m resolution?
1
How does DigitalGlobe plan to re-image a specific area “as frequently as every 20 to 30 minutes”?
5
Why were Europe's first few satellites so stylish? Why the pronounced alternating white and black stripes?
24
How did two satellites end up in almost the same orbit except moving in opposite directions?