Is there no physical security in space, other than being in space?

I saw Gravity the other day and while visually and emotionally compelling, and besides the liberties taken with orbits, something else struck me as unrealistic, but I'm not sure if it is or isn't: the apparently lack of physical security on spacecraft. As for its counterpart, I have a vague notion there is ferocious information security so someone with a transmitter can't deorbit a satellite.

While getting into orbit is something of an obstacle, are there no locks on airlocks? Is space like Canada?

First, I have to mention I haven't seen the movie yet. I've resisted temptation after seeing so many technical inaccuracies mentioned on Twitter by the International Space Station (ISS) astronauts that I follow. No, not the astrophysicist Neil DeGrasse Tyson, even though he was mentioned most frequently in the mass media for taking it a personal quest of his to debunk all the inaccuracies that were apparently littered throughout the movie, about its physics, technical details, even visuals. I mean people that were actually there, and most of them actually enjoyed the movie (I've read many of their reviews of the movie so this is my impression), albeit mostly for other reasons than its accuracy.

I could give you detailed technical specification of all the airlocks, hatches and whatnot that has access to and from the ISS (yes, there are several, although I suspect the movie tried to present the Quest joint airlock?), So I think this is best left to be explained by those that were both there, and have seen the movie. For example, Leroy Chiao (@AstroDude on Twitter), a former NASA astronaut and commander of the International Space Station (ISS) said in his review of the movie for Space.com:

... existing spacecraft are depicted with hatches and other controls that are in the wrong places.

... there is no way to enter an airlock from the outside, unless it had already been prepared for such an entry. The inner hatch would have to already be sealed. 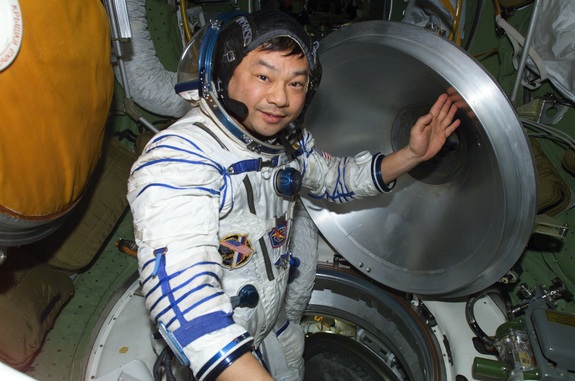 Additionally, again from my experience on Twitter, I've seen it mentioned that the repressurisation process in the movie took perhaps 3 seconds. That is again highly inaccurate and the repressurisation of the crew lock takes roughly 45 minutes, but can be somewhat hurried in case of an emergency. It would most certainly not be 3 seconds from 0 psi (0 kPa) to 14.7 psi (101 kPa) that is the ISS internal atmospheric pressure on astronauts' return from their EVA (Extravehicular Activity).

For example, when Luca Parmitano's helmet started filling with water from his PLSS (Portable Life Support Unit) and he rushed back to the airlock, it took many agonizing minutes to repressurize it, as he wrote in one of his blog posts. If it took 3 seconds, or thereabouts, that would literally feel like being inside an explosion. This repressurisation process can be somewhat appreciated by looking at the reverse, the depressurisation process for the Quest joint airlock:

The usual pressure inside the ISS is 1 bar, though in the Quest airlock this is 0.7 bar during depressurisation in connection with nitrogen purging. When the astronauts are in the crewlock ready to start their EVA this pressure is reduced first to 0.35 bar when a leak check is performed on the suits. If this is ok the crewlock is reduced in pressure down to 0.2 bar. The final depressurisation to vacuum occurs through venting through a valve in the EVA hatch. The hatch can now be opened and the EVA can begin.

The hatch remains open for the duration of the EVA for several reasons, among which also for astronauts to be able to return in an emergency, and also to conserve the volumes of the nitrogen and oxygen in the external tanks that are used for nitrogen purge, repressurisation and also to recharge the EMUs (Extravehicular Mobility Unit, of which there are two types onboard the ISS).

And no, none of the ISS external airlocks or berthing hatches open from the outside, so no keys there. Not the Russian docking ports on Poisk, Pirs, Rassvet or Zvezda service module, not on Leonardo cargo bay, Tranquility, Harmony, the JAXA's Kibō that has an airlock with a key release of the CYCLOPS (Kinetic Launcher for Orbital Payload Systems) small satellite launch system but from within the ISS, and not on the Quest joint airlock. The only hatches that have a sliding opening door that opens from the outside are on the resupply vehicles (there's many, so I'll spare you with the list), that are mostly tightened in place with a set of bolts that need to be removed with a torque wrench.

Anyway, I didn't see the movie yet, but I guess its script likely wouldn't work, if they tried to make it 100% accurate. The preparations for EVA take roughly one day with all kinds of, in terms of motion pictures, rather boring procedures that I don't expect anyone would be too interested in. Not in an action movie at least. Maybe in a documentary, but even there it likely wouldn't take longer than perhaps 10 minutes to go through it? So my advice would be that if you've forked out for the tickets, then make the best of it and enjoy the ride. ;)

P.S.: Oh, and about information security in space that you also mention in your question, here's a nice relevant thread from Information Security Stack Exchange on What would one need to do in order to hijack a satellite?

Locks aren't needed, because it is physically impossible to open the hatch from outside unless the airlock is depressurized.

All airlock hatches are inward opening (the STS Orbiter side hatch was not an airlock hatch) and the air pressure inside amounts to tons of force keeping the hatch closed.

For example, check out this picture of the ISS US airlock. That white thing flipped up is just a thermal cover. You can see the actual outer hatch hinges behind Cassidy and the hatch is down behind his backpack. 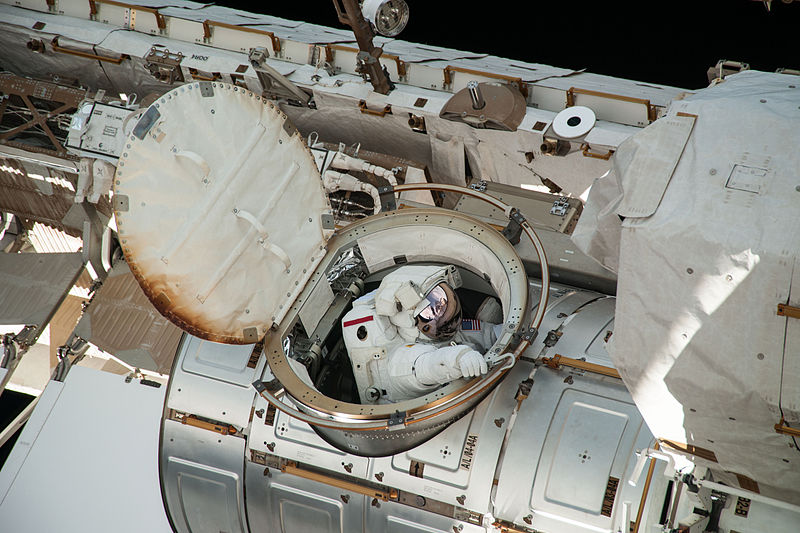 There are three major arguments against physical security on manned spacecraft:

For unmanned satellites the situation can be more complicated, esp. in the case of military satellites. It's likely those have countermeasures against remote tampering (hacking) on board.

Physical security? Again, unlikely. Launching a space mission isn't covert: anyone can track your spaceship, so if you launched a mission to hijack an enemy's satellite, they'd know it's you. Their response would be to bomb your launch site, so you'd get to do this no more than once. Again high cost, little benefit. The only problem military satellites face is getting blown up by an antisatellite missile, and those are difficult to defend against. A ballistic missile defence system is huge and expensive, to add that to a satellite would add several tons of weight and cost a fortune.

3
Do space satellites have physical intrusion sensors?
2
Are there any locked Airlocks in space?
1
Does the door of spaceships such as ISS have locks?
211
Can I borrow a lunar rover?
33
Can you vacuum out the ISS by opening the door?
18
Do astronauts on board the ISS have a backup spacesuit?
16
What was the source of the fluid in Luca Parmitano's suit?
13
What do the astronauts do whilst the air-lock cycles?
6
Is the inner airlock hatch kept open in-between spacewalks on the ISS?

44
Are there any weapons in space?
8
What does Zvezda alone lack from being a capable space station?
14
Is there an upper limit for the internal size of space stations?
11
Is there any other reason to split ISS to Russian and NASA side than pure logical?
8
Are there other companies than Bigelow Aerospace planning to offer a space hotel?
19
Is there any money in space?
5
Are there any examples of a reduced-gravity sporting event or match being played in space?
2
Following KRT-10 aboard Salyut-6, have there been any other radio astronomy observations from a space station or crewed capsule?