How to get true anomaly from time?

An exercise that was left unsolved from last year's class gives me this equation :

To finish the software I started writing, I would need to extract the true anomaly, $v$, knowing that all other parameters are given, but after a long time trying I still have no clue.

First, I think it can be reduced to an equation in the form of $\alpha*\arcsin(X) + \beta*X + \gamma = 0$ but I couldn't find any reference to solve such an equation anywhere online, and WolframAlpha doesn't give anything useful.

Also, I thought I could use a power series or a Taylor series to approximate a result, but it looks like it brings more trouble than solves anything...

If anyone has skills to help, I'd be grateful ! Thank you

EDIT : I fixed my program, if anyone is interested, here is the implementation. Thanks to everyone who helped !

This is just Kepler's equation $M = E-e\sin E$, but written in terms of $X = \sin E$, where $E$ is the eccentric anomaly. We don't have a derivation of Kepler's equation on this site, so here goes. I'll start with a picture. 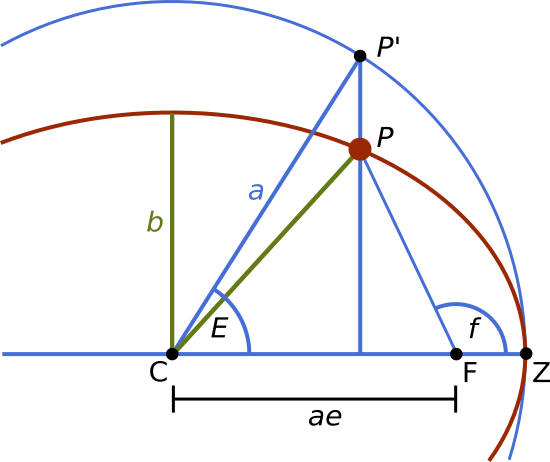 This is Kepler's equation. It provides a simple mechanism for computing time as a function of position. Computing position as a function of time requires inverting this transcendental function of the two variables $E$ and $e$. This inverse function cannot be expressed in terms of the elementary functions.

A very simple, guaranteed to work, method to find $E$ given $M$ and $e$ is to use the fixed point iteration scheme $E_{n+1} = M + e\sin E_n$. Any starting guess $E_0$ will do, but typically $M$ is used as the initial guess. This converges for all $M$ and all eccentricities between 0 (inclusive) and 1 (exclusive). The convergence is very slow, particularly for large eccentricities. A better approach is to use Newton's method, which exhibits quadratic convergence when it converges. A good initial guess is needed for large eccentricities to ensure convergence. Even better approaches, and even better initial guesses than $E_0=M$ have been found over the centuries. Kepler's equation is the subject of hundreds of scientific papers.

What about using $X=\sin E$ instead of $E$, as is done in the question? That's a "don't do that, then" kind of situation (from the joke, "Doctor, it hurts when I hit myself like this:《 bonk 》.") This only gets less than half of the ellipse, and the convergence of $\arcsin X - e X = M$ is terrible (if it converges at all). Use Kepler's equation (equation (2)) to solve for $E$, then solve for the true anomaly $f$ (alternatively written as $\nu$ or $\theta$) via equation (3).

edit: @DavidHammen has just posted a much more thorough and insightful answer, which also points out some problems applying Newton's method to the current form.

I'm pretty sure there are has never been an analytical expression discovered to solve $\nu(t-t_p)$, but solving using Newton's method applied to

should converge nicely to values of $X$ (or of course $\nu$ if you do the replacement) in a half-dozen iterations, at least for an elliptical orbit.

I haven't actually verified your equations though, just taking your word for it.

You could also calculate an array of points solving for time, flip it, and interpolate with a spline, but the accuracy is not predictable/reliable.

Not the answer you're looking for? Browse other questions tagged orbital-mechanics orbit trajectory orbital-elements calculation or ask your own question.

7
Calculate True Anomaly at future point in time with hyperbolic orbits
7
How to calculate the complete true anomaly motion in an elliptical orbit?
2
True Anomaly of Circular Orbit
3
Different results for Orbital Period?
5
Does Kepler's Method for Determining Time of flight between two True Anomalies break down with eccentricities approaching 1?
5
Do I have enough info to find the true anomaly of an orbit?