What is a near rectilinear halo orbit?

A proposed option for the lunar orbit of a Lunar Orbital Platform-Gateway (formerly known as Deep Space Gateway) is a near rectilinear halo orbit, or NRHO.

This excellent answer discusses the various tradeoffs between different lunar orbit options and explains why the NRHO appears to be such a good candidate.

There are some visual clues in the video, especially here and here but the captions are minimal. These might be good places to start.

For convenience I've managed to find some links to some of the papers listed at the end of the video.

At each point, the family bifurcates from the planar Lyapunov family of orbits. That is, the first halo in the family is planar, and it is also a member of the kidney-bean-shaped Lyapunov family. You can step up in the z direction and find another member of the halo family. And step up again to find the next. The family thus evolves out of plane, as you see in the video, and it keeps growing and approaches the smaller primary (the Moon if we're working in the Earth-Moon system). The Near Rectilinear Halo Orbits are the tall, nearly-polar ones that get really close to the Moon. How are they defined?

We've defined the NRHOs as those members of the halo families whose stability indices are bounded. That is, they're marginally stable, or nearly so, in a linear analysis. You can see a plot of the stability indices of the L1 and L2 halo families, a zoom of the NRHO portions of the two families, and the butterflies as a bonus, in Figure 2 of this paper: https://engineering.purdue.edu/people/kathleen.howell.1/Publications/Conferences/2017_AAS_DavPhiHow.pdf

Check out the top plot in Figure 2b. See how the stability indices are bounded (with a value of 3 or less) until you hit a perilune radius (rp) of 16,000 or 18,000 km, and then the stability indices begin to grow quickly? We've defined "NRHO" to lie to the left of that bifurcation- those halos with bounded stability properties. There's another bifurcation on the far left of those plots, where the stability index is equal to 1. You can see it for the red L2 line; for the blue L1 line that point is below the lunar surface and isn't included in the plot. That bifurcation marks the lower limit of the NRHO portion of the halo families.

Why are they special? As discussed in Ryan Whitley's paper you linked to, they're favorable for transferring into and out of, which is nice when your spacecraft is meant to be a staging ground for exploration, with other ships coming and going. They also provide really great lunar south pole coverage, since they whip quickly around the north pole and spend almost all of their time in the southern hemisphere. See: https://engineering.purdue.edu/people/kathleen.howell.1/Publications/Journals/2008_JSR_GreOziHowFol.pdf

In addition, they're close to stable. In a flatter, less stable halo, if you miss a stationkeeping maneuver or have an unexpected perturbation, you might escape from the halo in just a few weeks or less. In an NRHO, the lower stability index means that a missed maneuver or a perturbation affects your orbit less, and there's more time to recover before the spacecraft escapes the orbit. So- orbit maintenance (or stationkeeping) is required, but there's more recovery time than in a flatter Earth-Moon halo like Artemis flew. 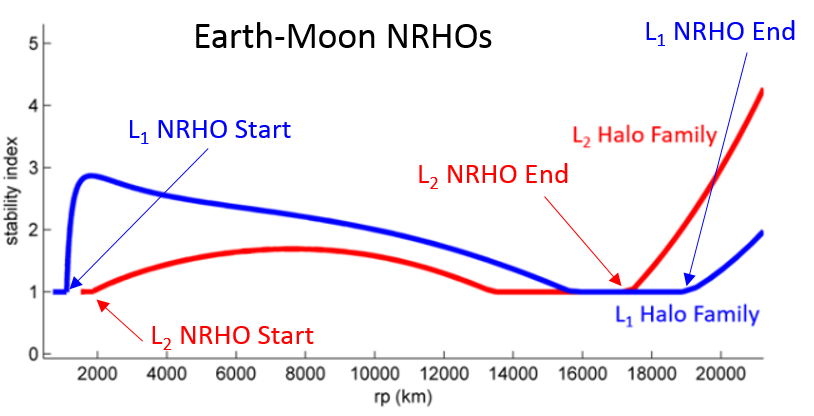 Figure 2b from this paper: 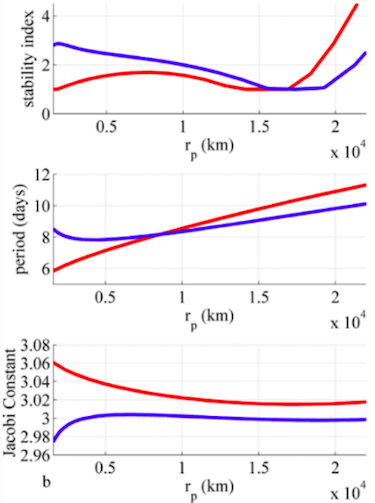 Not the answer you're looking for? Browse other questions tagged orbital-mechanics halo-orbit cislunar lunar-orbit lunar-gateway or ask your own question.

19
What artificial satellite has the farthest orbit around the Earth?
11
Why is a near rectilinear halo orbit proposed for LOP-G (formerly known as Deep Space Gateway?)
8
How does a butterfly orbit move in 3D? Way to generate or visualize?
7
Do Lagrangian points apply to eccentric orbits or binary systems?
6
Is the Gateway's halo orbit bound to Earth? Would the Gateway remain in Earth orbit if the Moon disappeared?
5
LOPG/Deep Space Gateway - What is a cislunar orbit?
6
Aspects of "true deep space environment" on Gateway not thoroughly explored by decades of habitation of nine space stations already?
4
Can mascons have Lagrange-like points? In principle? At the Moon?
4
How much delta-v does it take to get from a Lunar Transfer Orbit to a Near Rectilinear Halo Orbit around the moon
4
How will the Lunar Gateway go to L2 and L1; how much delta-v is needed?
See more linked questions

11
Why is a near rectilinear halo orbit proposed for LOP-G (formerly known as Deep Space Gateway?)
4
How will the Lunar Gateway go to L2 and L1; how much delta-v is needed?
5
How do I calculate the characteristic energy for a rocket to near rectilinear halo orbit where the Deep Space Gateway is going to orbit the Moon?
6
Is the Gateway's halo orbit bound to Earth? Would the Gateway remain in Earth orbit if the Moon disappeared?
8
How does a butterfly orbit move in 3D? Way to generate or visualize?
4
How much delta-v does it take to get from a Lunar Transfer Orbit to a Near Rectilinear Halo Orbit around the moon
1
Could there be a relatively stable near-rectilinear halo orbit associated with the Sun-Earth L1 or L2 points? Would the Moon screw it up?
5
Is there a fairly detailed outline of CAPSTONE's "highly efficient ballistic lunar transfer trajectory" from LEO to lunar near-rectilinear halo orbit?