Why would Mars' sky appear blue at dawn and dusk, but red during the middle of the day (reverse of Earth)?

After reading the really interesting question and discussion Terrestrial Exoplanet Skies – I've Built a Visual Sky Chart. Is it Accurate? I was reminded that in this video at 40:20 Elon Musk mentions that at dawn and dusk Mars' sky (would appear) blue, and red during the middle of the day, the reverse of Earth's sky.

The picture thumbnailed below from here, originally from NASA, does indeed show a reversed effect from what we see on Earth. Note that the hue of the Sun is not reversed; instead of the orange or red Sun on Earth turning blue or green on Mars, the Sun remains white.

When the Sun is rising or setting on Earth, blue light is scattered over a broader range than red, but the narrow range over which the red light is scattered has more intense red light. Hence the switch from blue to red as one's line of sight approaches the Sun. Mars presents a similar effect, but with the colors in reverse order.

The Sun itself appears to violate this rule on Mars, appearing white instead of blue or green. This is because the direct light of the Sun locally overpowers the scattered light around it; in the thin Martian atmosphere only a little light of any color is scattered away. On Earth, enough light is scattered to color the Sun but it's still much whiter than the surrounding, reddened sky. We see that difference when contrasting components of the direct sunlight's spectrum are highlighted by optical conditions. 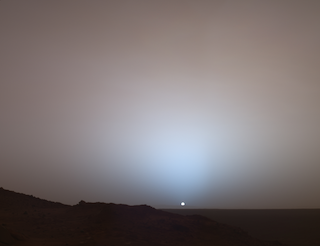 I came to this interesting question while discussing a related one: Do the gases in the Earth's atmosphere affect the color of a lunar eclipse?.

After thinking on the possible cause for this,"reversed" as compare to Earth, phenomenon I came to identify the directionality of Mie scattering as a possibility.

Digging a bit more to find corroborative material I have found this link that nicely explain the situation on Mars, and includes a truly beautiful comparison of photos of a red sunset on Earth and blue-ish sunset on Mars:

It is especially nice as it reviews the Rayleigh diffusion that is dominant in our atmosphere first, making it easier to understand the comparison to the optics of Mars' atmosphere. Moreover, after explaining the current answer it makes a point related to the question I mentioned above. So it even complements my answer to that.

Not to limit myself to a link-only answer, I would like to stress few points that will make the understanding even easier:

• while the intensity of Rayleigh scattering is very sensitive to wavelength, Mie scattering is normally relative agnostic to that.

However, it has a directional character, and particularly so when the particle have magnetic properties such those of the magnetite dust present in the atmosphere of Mars. In this case a remarkably forward vs backward scattering asymmetry can occurs, resulting in shorter wavelengths propagate straight as compared to longer ones.

...unfortunately though, after a paywall.

This is what causes the blue sunset on Mars.

For sake of precision, martian midday has a more iyellow sky dome, then sky is progressively reddening til sunset arrives.

The point here is to correctly see the forward radiation as a scattered too, which semantically is not straightforward. The meaning is that the photons do indeed interact with the particle and are then diffuse along various directions. It just happens that in this particular Mie case the predominant one coincide or is a prolongation of the incident one.

As a curiosity, this link show a martian sky but in the Alps. While the NASA explains the bluish tint of sun on Mars by the forward scattering I mentioned above, it does not say if the mechanism is exactly the same in the alps case. It just mention the hard physics cause, i.e. Sahara's sand. https://apod.nasa.gov/apod/ap210218.html

• always dealing with colour is important to recall that we are not dealing always with monochromatic light. In discussions such a this one we must keep in mind that the colours we perceived are always due to a particular spectral distribution and even a combination of other factors as brightness and contrast. In terms of photons number the solar spectrum just out of our atmosphere, whatever we named its colour, is this:

Photon flux vs Wavelength, AM0 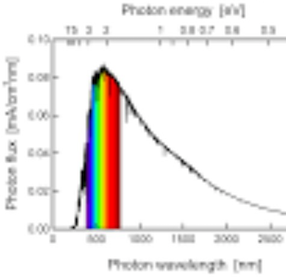 Whatever colour we perceive, the spectrum impinging to our retina is always what results after the source spectrum has been modified by the various phenomena occurring in between. A modified ratio at different wavelength can suffices for us to perceive different colours. Whose more interested can look for the CIE colour space, for instance

Edit: the end of my answer above covers the aspect of brightness and contrast. However it does so in a very general way as it applies to all circumstances. A nice answer to the question would be combining the one above with that by Oscar Lanzi below. To which amount the various effects contribute to the observe facts remain opens, but we got an idea of the sunset colour reversal.

The Martian atmosphere is too thin. When the sun is high in the Martian sky the thin atmosphere and suspended dust particles make the sky red. As the sun 'sets'the light must penetrate more atmosphere and this is when all colors but the color blue are absorbed. Hence a blue sunset / sunrise.

Not the answer you're looking for? Browse other questions tagged mars visualization or ask your own question.

20
Why does the sky of Mars appear blue in this video of pictures sent back by the Chinese rover?
3
How does the color of the atmosphere differ on Mars? Does the sky during sunset on Mars look just like midday?

4
Why would InSight's arrival date at Mars be fixed, and independent of the launch date?
1
What is the science behind the variation of Mars' effective sky temperature with latitude and longitude? Why the "hot spot"?
8
Could a spacecraft be put into such an orbit that it would alternately slingshot around Mars and the Earth?
5
Why did NASA intentionally crash-land the Curiosity and Perseverance sky cranes on Mars?
20
Why does the sky of Mars appear blue in this video of pictures sent back by the Chinese rover?