Would terraforming Venus destroy its ionosphere?

In "Can Venus be made habitable?" we see that Venus's atmosphere would have to be substantially altered in order to terraform Venus.

"Why has Venus's atmosphere not been stripped away by solar wind?" tells us that even though Venus has no magnetic field, it does have an ionosphere generated by the interaction between solar wind and the thick atmosphere.

If we altered Venus's atmosphere substantially for terraforming, would it weaken this effect thereby destroying Venus's ionosphere?

In other words, if we made Venus have the same atmospheric thickness and composition as Earth, would its ionosphere be weaker than the Earth's?

If this is the case, then Venus's atmosphere would be at risk of being stripped by solar wind like Mars's was (see "Would terraforming Mars be possible?"). This would mean we would also need to create a magnetic field for Venus to truly terraform it.

A short answer is no, Venus wouldn't lose its ionosphere if the target state of terraforming is matching Earth's atmospheric composition, temperature and pressure. The long answer is a bit more interesting though, particularly why that is a problem, and not a solution to Venusian lack of magnetic field. Let's first address the first point, and I'll slowly progress towards the problem parts;

Ionosphere isn't anything special, it's something we should expect on any celestial body that's close enough to its star and holds lighter elements exposed on their surface, if it's initially having atmosphere or not, for its topmost layers to interact with the star's high energy proton flux and electromagnetic radiation. Even the Moon has ionosphere because, while its exosphere isn't dense enough for its molecules to interact with each other, they still interact with the solar (photo and/or ionizing radiation induced) charged lunar surface. We also see this interaction with comets and their surface activity increasing as they cross the Solar system's snow line roughly somewhere in the middle of the main asteroid belt's distance to the Sun. Actually, it doesn't even take being close to any star and this interaction will in the long run be sufficiently provided by cosmic rays, it will only take longer for much of the pressure above the celestial body's surface to form, and the total pressure won't be sufficient for us to call it an atmosphere, if it's then constantly being blown away by solar winds or the body isn't massive enough to hold onto these ions gravitationally or by strong force, say surface tension or electrostatically. E.g. we'd likely call it an exosphere since its pressure wouldn't be sufficient for released particles to interact between each other like we'd expect them to in proper atmospheres (where density is high enough that its constituent elements, atoms, molecules or more complex and heavier particles frequently collide with each other).

Whichever source of interaction with high energy atomic and subatomic particles, or source of strong electromagnetic radiation like e.g. UV, gamma, et al., or even beta particle radiation, when they hit a molecule of weaker valence, they will cause their molecular bonds to break and atoms themselves to lose electrons, or rarer, even lose protons. In essence, they will ionize, and area of atmosphere that holds this proton gradient, where lighter, more energetic positive charge particles float over the remaining byproduct of such interaction, their heavier negative charge anions, is what we'd usually call an ionosphere. This is where Venus gets its weak electromagnetism of its ionosphere from. Now, most of its atmosphere is CO2, and there isn't much in a sense of extremely light ions forming, such as we'd expect if there were molecules of water in the upper atmosphere, at first splitting into H+ and OH-. And that's a problem, if terraformed Venus wouldn't have its own magnetic field. Let's inspect how Venusian interaction with solar wind looks like now: 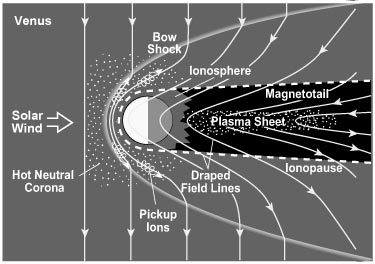 Interaction of Venus with the solar wind (Source: Venus: The veiled planet)

As you can see from the image, Venus is capable of sustaining thick enough plasma sheet in its magnetotail to act with its proton gradient as weak magnetic field, holding onto most of the now charged / ionized upper atmosphere that's been pushed away from it by the solar winds. This is possible because most of these ions (cations for positive charge ions and anions for negative charge ones) are heavier atoms with sufficient number of electrons orbiting their nuclei for this proton gradient to be relatively strong and countering their kinetic force as they're accelerated by interaction with high velocity proton flux of the solar winds. So Venus is able to hold onto most of its atmosphere and the rate at which it loses it to strongest interactions, such as being directly hit by a coronal mass ejection or a solar flare is slower than it is able to replenish it.

This becomes a huge problem with magnitude thinner Earth-like atmosphere that also contains light elements, like hydrogen in water molecules. The magnetotail would compose of fewer and a lot lighter elements, including H+ and they would be blown away from Venus, losing great deal of its terraformed to be suitable for us atmosphere. So unless you can sustain this terraforming process that made it habitable in the first place and match loss of atmosphere, or kickstart a magnetic field on Venus to lower this interaction rate, or even somehow block or deflect the inbound solar wind, lower atmosphere would weaken and lose pressure to outer space. Ionosphere would still be there though, slowly sucking the denser lower atmosphere until it's own depletion.

And that's the source of my now deleted comment that this question can only be sufficiently answered if you included means of terraforming Venus. One of the main problems with that is getting rid of most of its CO2, and one way to do that is by pumping enormous amounts of hydrogen into its atmosphere, preferably with addition of metallic (iron, cobalt or nickel) catalyst to force it into Bosch reaction, where end result is atomic carbon and water: CO2 + 2 H2 → C + 2 H2O. But whichever mode of terraforming would be chosen, if end state is to match Earth's own atmosphere (or come close to), and the planet to contain bodies of water, significant part of its atmosphere would be water vapor. And hydrogen bonds aren't strong, and water likes to lose one of its hydrogen atoms even with relatively weak interaction with colliding high energy particles and UV radiation. So the ionosphere would end up being too big for comfort, magnetotail would be weaker (less dense than now and with weaker, single electron carrier ions, less electromagnetically attractive) and planet would start losing its atmosphere faster. But it wouldn't lose its ionosphere, it would replenish through lower atmosphere while there is any.

For an interesting fresh insight on Venusian ionospheric dynamics, here's a NASA Goddard article (inc. a video): Research Helps Unravel Mysteries Of The Venusian Atmosphere. Reproducing a quick, most relevant excerpt from it here for easier reference:

Interpreting what is happening in Venus's ionosphere requires understanding how Venus interacts with its environment in space. This environment is dominated by a stream of electrons and protons – a charged, heated gas called plasma -- which zoom out from the sun. As this solar wind travels it carries along embedded magnetic fields, which can affect charged particles and other magnetic fields they encounter along the way. Earth is largely protected from this radiation by its own strong magnetic field, but Venus has no such protection.

What Venus does have, however, is an ionosphere, a layer of the atmosphere filled with charged particles. The Venusian ionosphere is bombarded on the sun-side of the planet by the solar wind. Consequently, the ionosphere, like air flowing past a golf ball in flight, is shaped to be a thin boundary in front of the planet and to extend into a long comet-like tail behind. As the solar wind plows into the ionosphere, it piles up like a big plasma traffic jam, creating a thin magnetosphere around Venus – a much smaller magnetic environment than the one around Earth.

The Venus ionosphere would definitely not be destroyed. Ionospheres are formed by interaction between the atmosphere and the ultraviolet radiation from the Sun. The UV radiation is more intense closer to the Sun, so Earth-like atmosphere on Venus would probably have even denser ionosphere than actual Earth has. Venus receives 1.9-times the irradiance in compare to the Earth.

The ionosphere on terraformed Venus could be even thicker than it is now. The UV radiation does not currently penetrate deep into the Venerian atmosphere due to its immense density. It would get much deeper if the atmosphere was less dense. See here on page 229. This could ionize thicker layer of the atmosphere.

The question is of course what would be the actual electron density (and its altitude profile) and whether it would be greater or smaller than currently on Venus. Today Venus has maximum electron density in its ionosphere about $ 3.10^{11} m^{-3} $. Earth ionoshpere electron density peak is about $ 1.5.10^{11} m^{-3} $ which is half of Venus, so in fact it is comparable. We may be tempted to think that closer to the Sun the density in Earth-like ionosphere could be bigger. But density varies wildly over altitude and what exactly would happen with Earth-like ionoshpere electron density profiles at Venus is hard to estimate - I am not aware of any such study. Anything could happen, because there are many effects: atmosphere density, depth of UV penetration, etc.

As a side note, Venus does have an induced magnetosphere. Of course it is weaker than Earth magnetosphere, but it does provide partial protection against the solar wind.

All this would still not stop stripping of the terraformed Venus atmosphere by Solar wind.

Not the answer you're looking for? Browse other questions tagged venus atmosphere terraforming or ask your own question.

58
Would terraforming Mars be possible?
17
Can Venus be made habitable?