Are there rules and ethics to follow in space?

If someone were to go to the moon and set up their own camp. Would NASA and governments be okay with it? Or would they not care?

Is there a rule that says I can't do anything to the moon or else people will put me in prison or something?

This is highly dependent on who the parties in question answer to. Also rules, ethics, and laws are three quite different (though sometimes related) things. To address the ethics part of the question, here are a few examples.

There is a Code of Conduct for ISS Crewmembers.

...the Code has been implemented in Europe through a directive of the ESA Director General addressed individually to members of the European Astronaut Corps (EAC), in which they are invited to agree in writing to the terms and conditions in the Code, a process that is consistent with the ESA Staff Regulations and the decision taken in March 1998 by the ESA Council on the modalities for building up the EAC. In the United States, the Code has become part of the US astronauts’ terms and conditions of employment through the adoption on 1 October 2000 of corresponding regulations under NASA’s existing legislation (14 CFR Part 214). In Japan, the Code will be incorporated into regulations consistent with the terms of the legislation that established the National Space Development Agency (NASDA) and Japanese astronauts, as employees of NASDA, will be invited to sign up to the terms of the Code. Similarly in Russia, the cosmonauts will be invited to sign up individually to the terms of the Code once it becomes part of the regulations and policies applicable to the Russian Aviation and Space Agency (RSA). In Canada, where astronauts are appointed by decision of the Cabinet, the Code will become part of the terms and conditions of astronauts’ employment in the same manner, i.e. through an Order in Council issued by the Cabinet.

And a NASA Astronaut Code of Professional Responsibility. 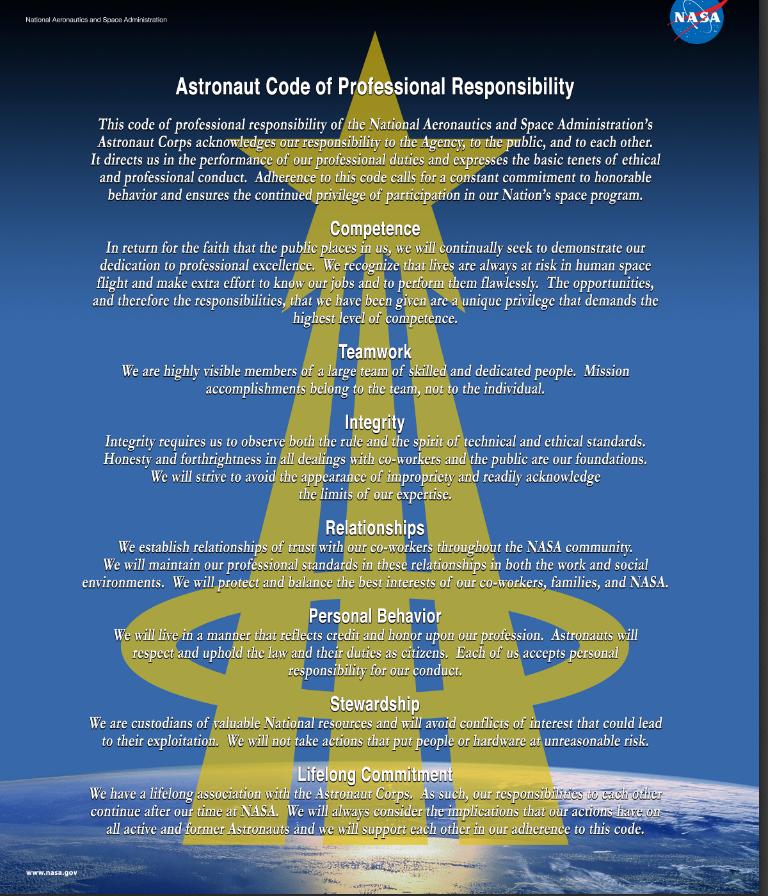 Not the answer you're looking for? Browse other questions tagged nasa law or ask your own question.

12
What is the legal status of in orbit space debris?
16
How would finding life on Mars affect the timeline to send people?
6
What stole the INSPIRE cubesat launch opportunity, and will there be another?
16
Were there any CAPCOMs who were not astronauts?
3
What are NASA's dozen payloads for the Moon that will be ready for launch by the end this year? (2019)
3
Will NASA put astronauts into a polar lunar orbit? If so, how?
13
Reentry without pressure suits in Apollo: was there a formal risk assesment?
2
How redundant are Orion's power and data units (PDUs)? Doubly? Quadruply? If so, why?