Cost-effective Space Shuttle: was it feasible?

As far as I understand, NASA's Space Shuttle was initially conceived as a cheap way of launching people and cargo into orbit, with one-week vehicle turnaround time and dozens of missions per year. Then the politicians/USAF intervened, demanding unreasonably large payload and oversized wings for glide to Vandenberg, among other things — and that's why the Space Shuttle programme ended as an economic disaster.

But my question is: was the initial concept really feasible in the first place? Would the Space Shuttle have been as good as advertised, if only the design had not been changed to accommodate unnecessary features?

If not, would it be possible to build such vehicle with modern tech?

Let's look at what "the initial concept" really was.

The post-Apollo vision was to build space infrastructure that would enable the manned exploration and exploitation of the solar system. The surface-to-low-Earth-orbit reusable shuttle was but one part of this grand plan, as shown in this 1970 slide from Marshall Space Flight Center. 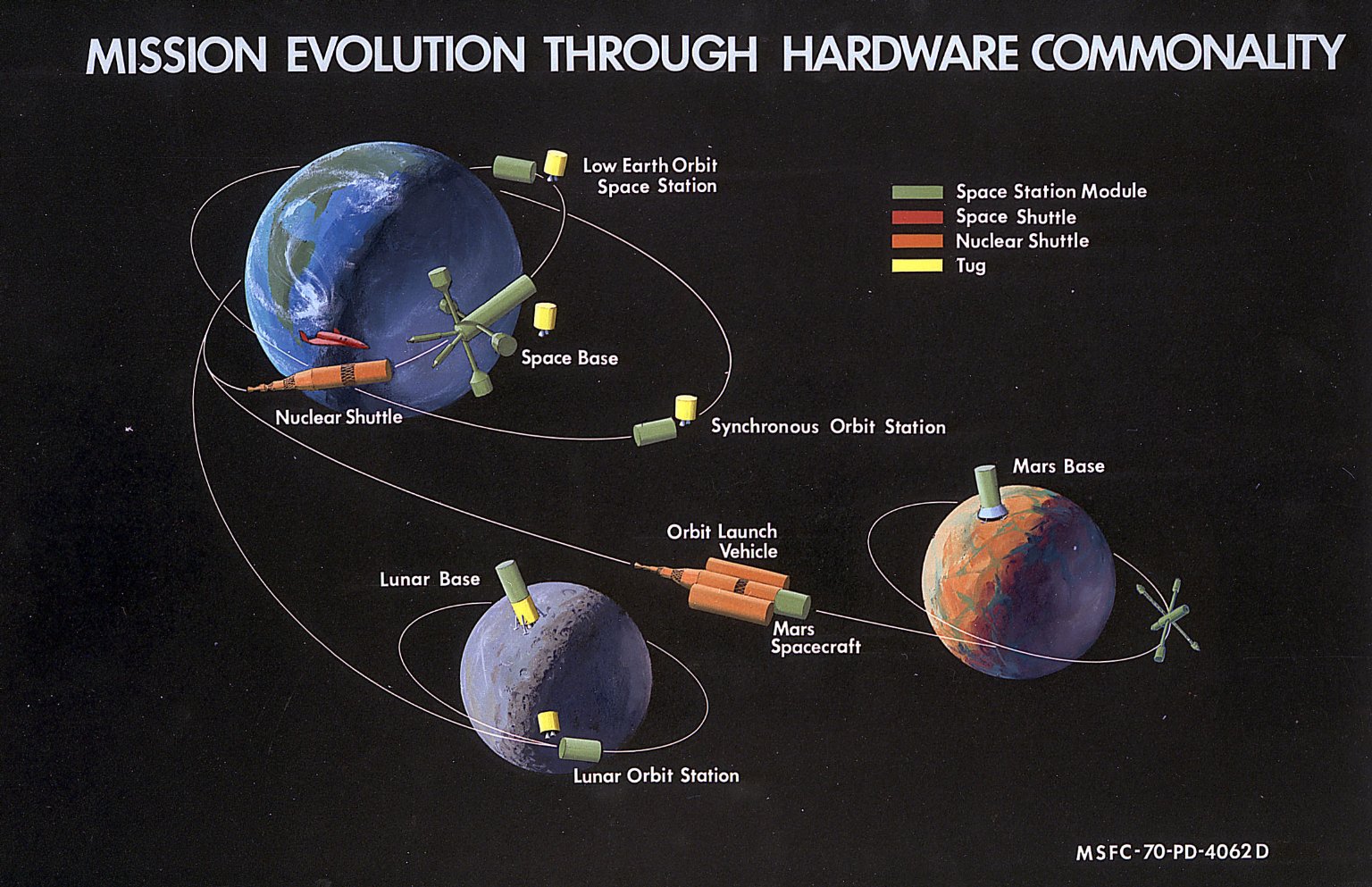 When budget realties and realpolitik got into the process, the fully reusable shuttle was changed to partly reusable, trading development costs for operational costs later down the road. All other elements of the plan were deferred, vastly reducing the number of shuttle launches and really calling the entire rationale for a shuttle into question. Desperate to keep a manned vehicle, NASA resorted to joining with DOD and handwaving the economics of the shuttle.

Would it have been as good as advertised?

A smaller, totally reusable vehicle would have cost less per flight. A much larger fleet flying many more missions would have vastly increased the experience base and perhaps reduced the political impact of accidents. If an F-16 crashes, it makes the news, but it's not a national tragedy, and the Air Force doesn't grind to a halt for years while it's investigated. The shuttles we got were treated as national treasures and their low flight rate and extreme cost made the experience base small and the opportunities to improve them scanty.

You're probably really asking "was 1970s technology up to the task of building a smaller, fully reusable, shuttle that could crank out a high flight rate". Speculative, but my guess is...probably. The shuttle we got was so close to the margins every flight that an enormous amount of inspection, test, and overhaul was required after every mission to make sure it was OK to fly again. It was probably possible to design in extra margin at the cost of performance...but that's largely an economic decision, and a tough one to make if you don't have the grand vision.

Some aspects of your question are covered in answers to these questions:

Technology: How would a state-of-the-art space shuttle be built?

Why did NASA close the space shuttle program?

If you have a serious interest in this topic, I highly suggest you read "The Space Shuttle Decision" by Heppenheimer. It's available online here.

The Shuttle had many design issues. Some of them could have been fixed with modern technology, for example better heat shielding that did not require tens of thousands of tiles.

Others were endemic to the way the requirements fell out. The Air Force, to keep their funding in, required large cross range abilities, and the possibility of launch, deploy payload, and land, in a single orbit. These required a large delta wing, which added weight and complexity. (Which was related to one of the losses when the wing leading edge was punctured on the Columbia loss).

Lack of funding meant they settled on SRB's instead of liquid fueled boosters (Possibly using F-1 engines) which was related to the other shuttle loss of Challenger.

Then political issues meant work needed to be split up and Thiokol/Morton/ATK (whatever the name was back then) got work in Utah, so the SRB's had to be segmented and shipped by rail, which meant joints and so on which was part of the issue for Challenger.

Dream Chaser is an attempt at a lifting body reusable vehicle. Time will tell if scaling down the absolute size, the wing size, using a simpler booster, etc will be feasible.

It's certainly possible to build a reusable path to orbit with modern technology. That's precisely what SpaceX have been doing for several years.

Would it look like a Space Shuttle? Nope, which is why SpaceX has taken the well-proven big dumb booster design and added only such complexity (for landing and reuse) as is absolutely necessary.

A simple rocket is simple (relatively so!), and the mechanics and control theory are reasonably well understood. Politically though, it had to look like an aeroplane because the Air Force contributed such a large element of funding and manpower. The very concept of wings was a failure from the start, because every element of a wing for is pretty much the opposite of what you want for space flight and for a reentry vehicle. The utter failure of Scaled Composites to deliver anything beyond their initial simple shot to low altitude is a further demonstration of how faulty the thinking behind an aeroplane-based design is. Looks cool, ticks all the boxes from your 50s sci-fi pulp novel covers - but fails in the face of physics.

Not the answer you're looking for? Browse other questions tagged spacecraft space-shuttle cost or ask your own question.

33
Why didn't NASA use the shuttle to make a profit?
25
Technology: How would a state-of-the-art space shuttle be built?
10
Why did NASA close the space shuttle program?
17
Why were four Space Shuttle orbiters initially built?
9
Building space stations with the original, smaller shuttle