Has any payload been as silly, as the Falcon Heavy's Tesla Roadster?

Seemingly as a joke, Elon Musk suggested in a tweet that the first payload of Falcon Heavy demo flight would be his Midnight Cherry Tesla Roadster.

The first payload of Falcon 9 with a Dragon test article was a wheel of cheese (playing off Monty Python's Cheese Shop skit).

Many assumed he was joking, so of course he did it. 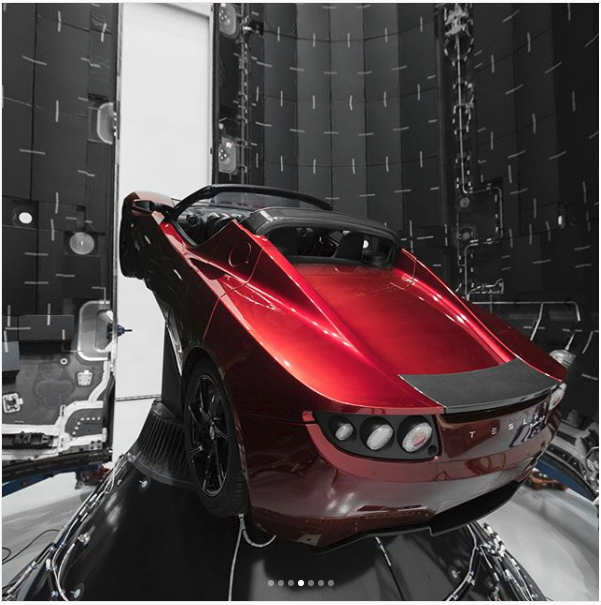 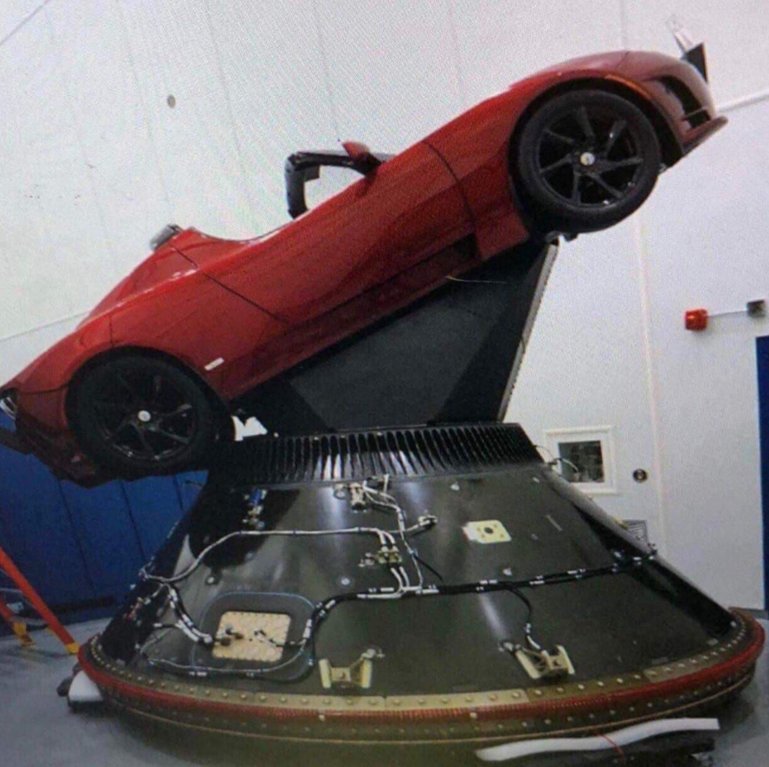 In the annals of space history this has to pretty high up there in ridiculous payloads. To be clear, this is totally awesome. And playing Space Oddity (Must be Hadfields ISS version) till the battery runs out is even better! In space no one can hear your stereo playing music, but who cares!

Are there other examples that are as silly?

The 'Disco Ball': Created by Rocket Lab founder and CEO Peter Beck, the Humanity Star is a geodesic sphere made from carbon fibre with 76 highly reflective panels. It spins rapidly, reflecting the sun’s rays back to Earth, creating a flashing light that can be seen against a backdrop of stars. Visible for a few seconds, every 90 minutes, each night, for the next several months. 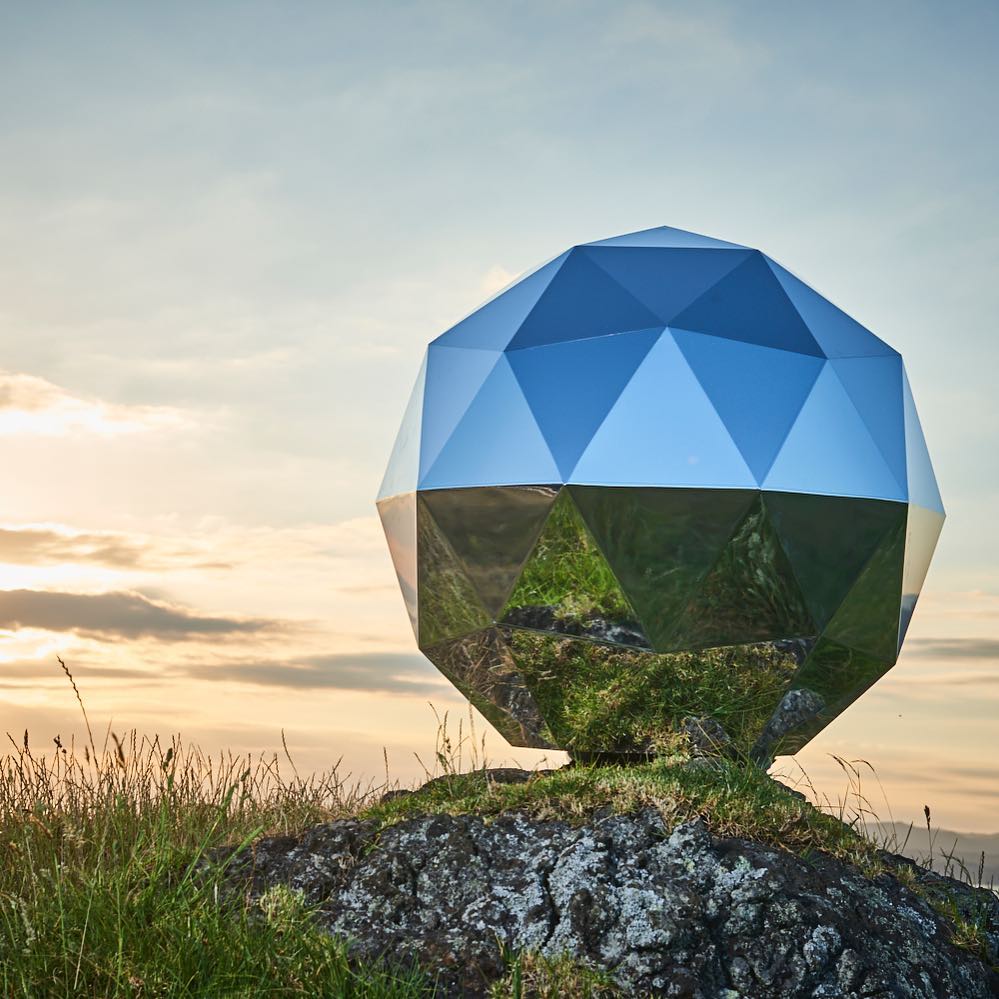 Throughout history a number of odd or useless things have been sent into space. Commercial ventures seem to top the list for 'bad ideas' placing profit and sanity over professionalism and safety.

In 2005 a gold-plated scandium six-iron golf club from Element 21, several golf balls, an equipment bag, tee and specially-built platform were hauled to the station last September on a Russian space freighter.

See anything wrong with this picture? 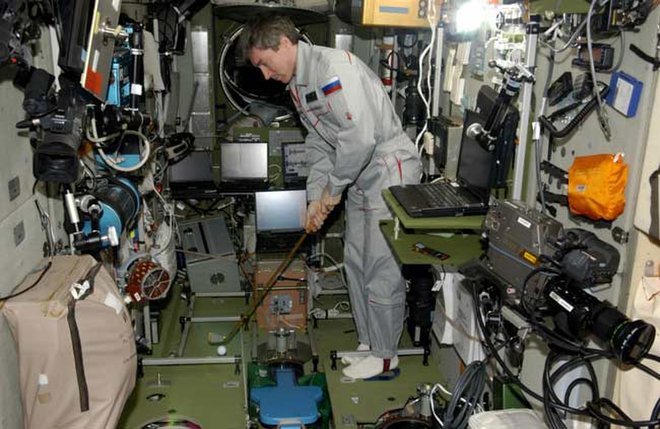 Indeed there were delays approving the stunt and it was cancelled eventually due to safety concerns. The idea was that the balls were equipped with transmitters that would enable golfers to follow its flight around the world at the company's Web site, because that's something golfers would like to do.

Suggested by user "Organic Marble" are the Coke dispensing machines and the Pepsi can shaped inflatable.

The yellow tinted Coke machine, an unfortunate color choice considering where the water comes from. 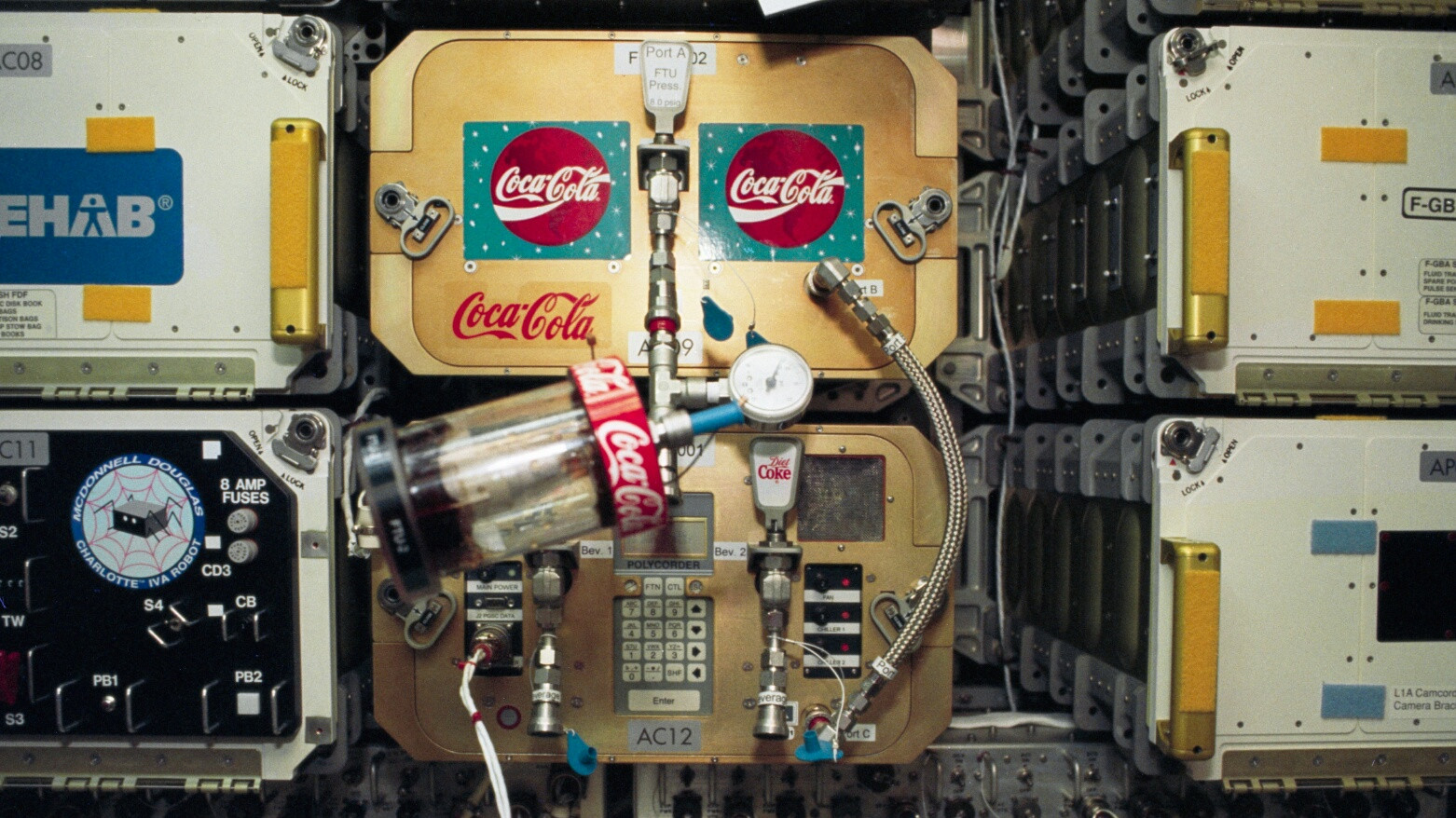 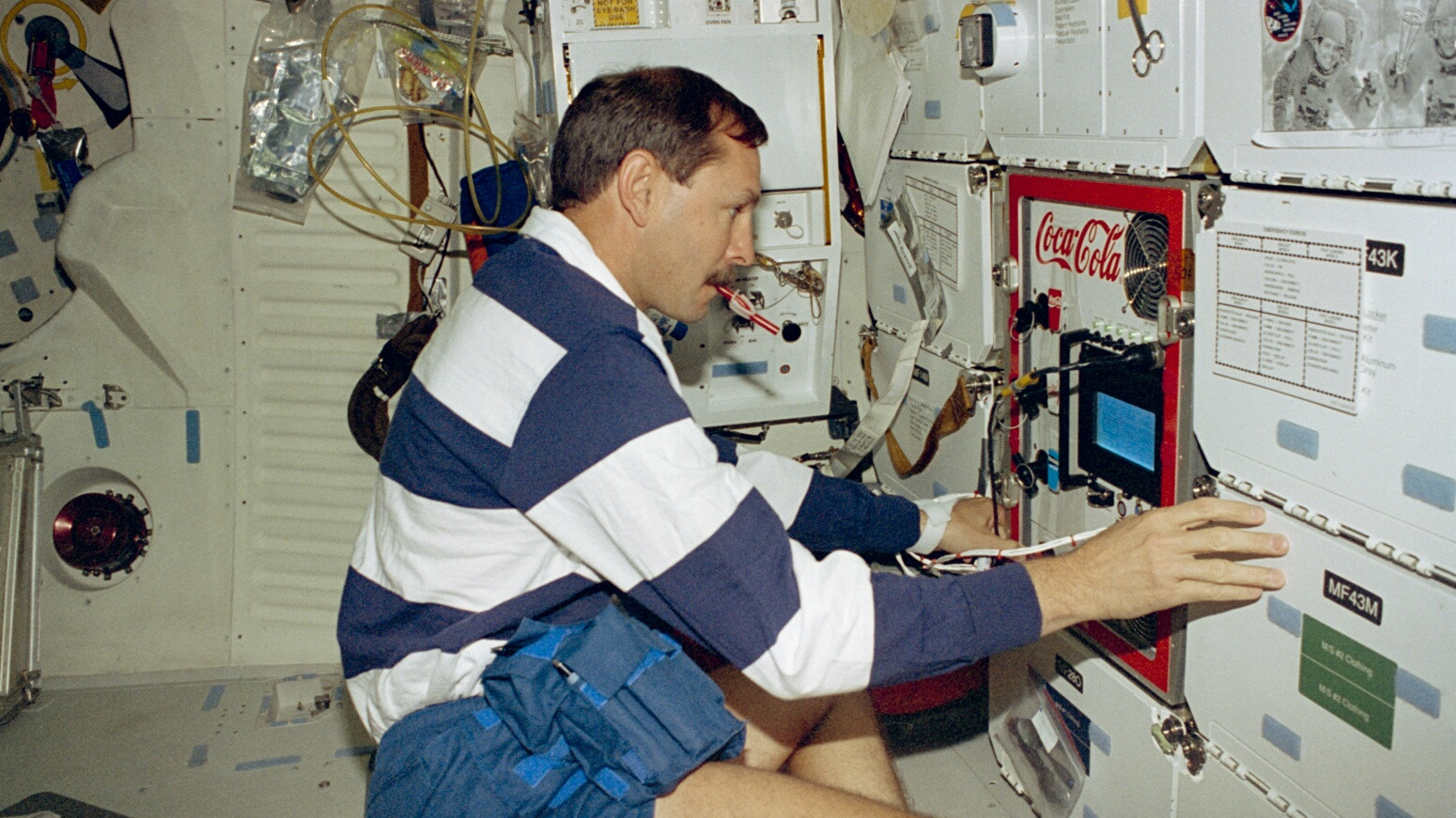 The machine also included a number of complicated accessories necessary for its operation. Personally autographed photo of Vladimir G. Titov examining the refills for the pop machine. 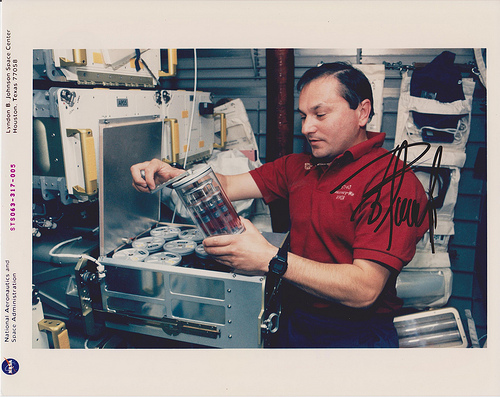 Rare (and low resolution) footage from YouTube showing BTS of the inflatable Pepsi can commercial, with interviews and extra info (15 mins.). Video footage of the can and banner was shot both inside and outside Mir space station but the commercial never aired because Pepsi later changed the design of the can.

You would really have to be noodles to think Nissin Noodles would be a good idea for space consumption, boiling water, chop sticks, or just mash them and eat it like toothpaste. 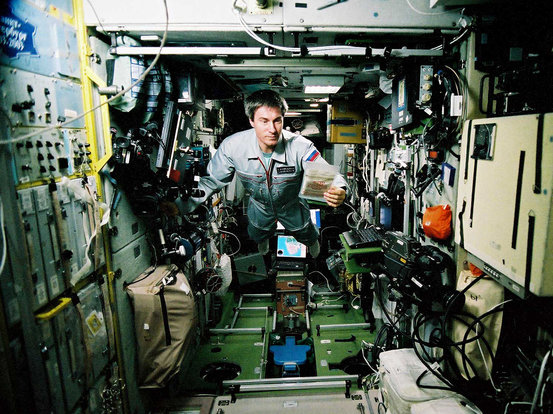 Earlier space flights were kinder to their human occupants, it was non-human lifeforms that suffered indignities.

The Russian Tortoise is an endangered species so it seems as though a better choice could have been made. The launch of Fruit Flies didn't seem particularly adventurous.

Here is a photo of Miss Baker, she was accompanied by Neurospora, samples of human blood; E. coli; onions; mustard and corn seeds; Drosophila pupae; yeast, and sea urchin eggs and sperm.

Which is sillier, traveling with E. Coli or urchin sperm? 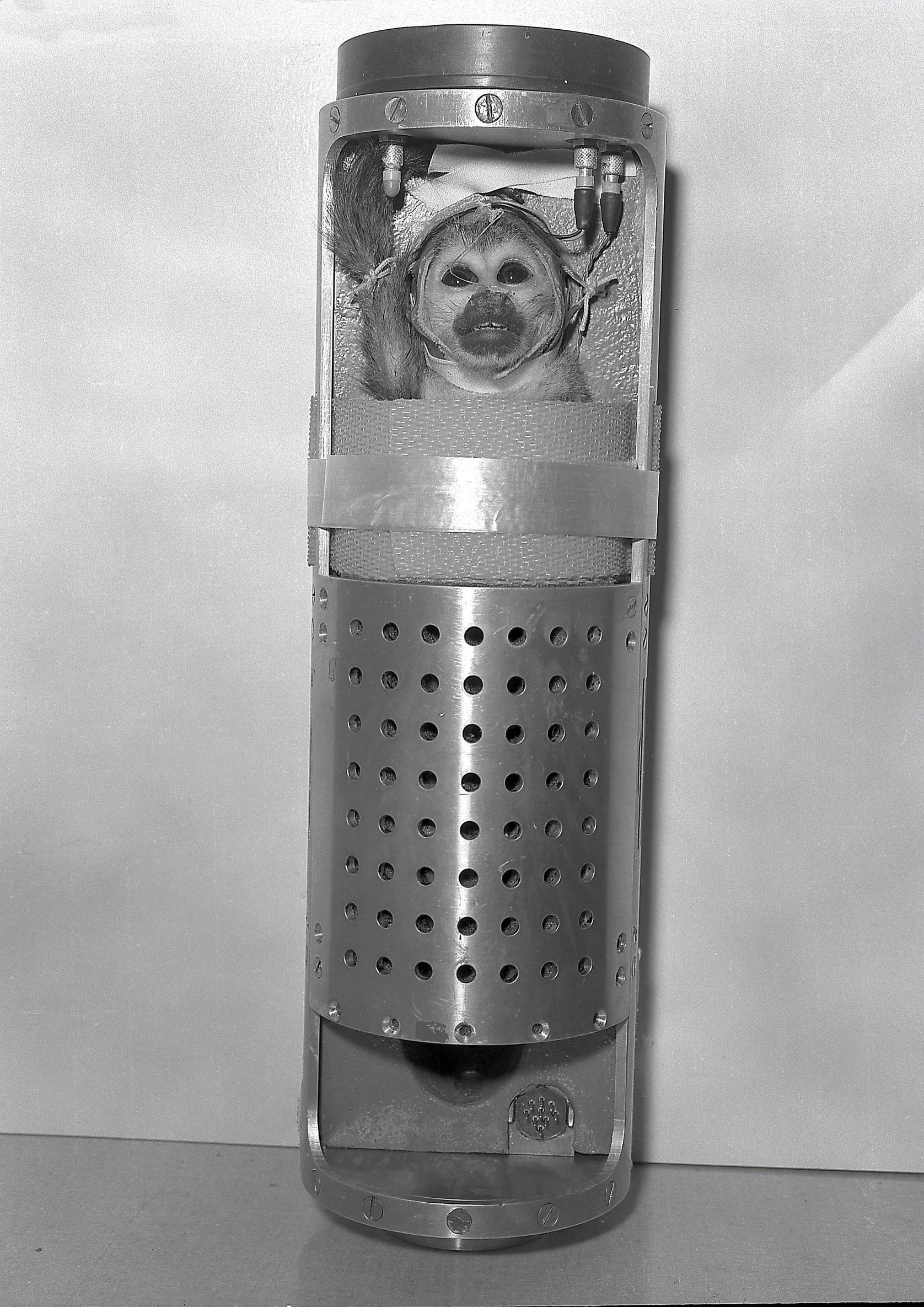 The reason cheese was sent into orbit is because it was a maiden flight with many untested calculations, so they didn't want to risk anything too valuable.

Also silly was a Obama Bobblehead but it didn't pass the stratosphere and it's reason was to raise funds for reelection. 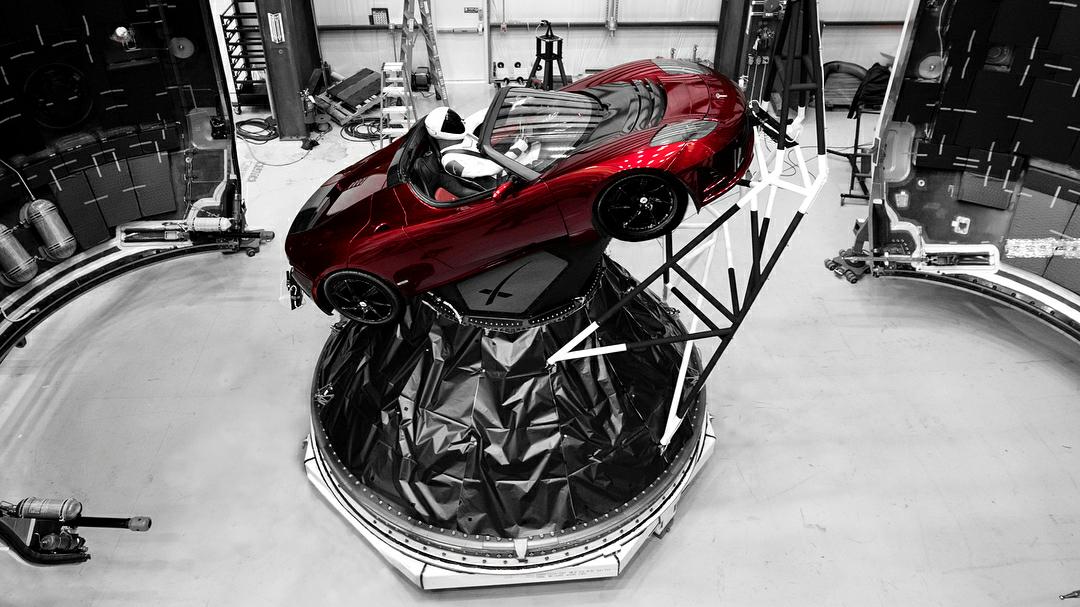 Samantha Cristoforetti in a Star Trek uniform in the Cupola of the ISS definitely is up there in my book, but no, I think it's fair to say that the Tesla Roadster is the most gloriously silly thing to be put into space so far!

From a strictly justified point of view, the roadster is a heavy Static Payload for use in testing the Falcon Heavy's ability to lug weights.

Ordinarily for a mission like this they'd have simply launched a big chunk of concrete as a dummy weight, but since Elon Musk is a bit of a dreamer and wants to do things people will remember, they traded the dummy weight for a car in one of the best PR stunts I've ever seen or heard of.

Not the answer you're looking for? Browse other questions tagged spacex falcon-heavy payload tesla-roadster nonstandard-payload or ask your own question.

32
Why didn't NASA use the shuttle to make a profit?
39
Is it possible to observe space debris with Binoculars?
7
Was a commercial (ad) balloon satellite ever deployed?
7
Falcon 9 fairings stability on reentry
6
Does Humanity Star have non-reflective triangular panels? If so, what are their characteristics?
7
Have LAGEOS' germanium corner cube reflectors ever been used?

62
Can I drive Elon Musk's Tesla after it's been in space for 100 Years?
11
Will the Tesla Roadster return any telemetry?
41
Why is the first launch of Falcon Heavy sending a car instead of something useful?
76
Is the SpaceX Falcon Heavy payload (a Tesla car) space junk?
24
Is Starman in the Tesla Roadster a real human?
8
What is Falcon heavy's payload capacity to Trans-Lunar Injection
29
Could the Lunar X-Prize have been won by the Tesla Roadster that was the Falcon Heavy test payload?