Difference between Tundra and Molniya orbits?

This excellent answer nicely describes both Tundra orbits and Molniya orbits. They are both repeat groundtrack orbits with periods of rational fractions of a sidereal day, and both have inclinations of $\arcsin(\sqrt{4/5}) \approx 63.4°$ to zero the precession of the argument of perigee.

The linked articles say that Tundra orbits have eccentricity of about 0.2 to 0.3 (though QZSS are only about 0.075) and Molniya orbits are about 0.7.

Question: What are the orbital mechanical and functional differences between these two classes of orbits? Is a Molniya the same as a Tundra, except that the eccentricity of the latter is high enough to be useful to Moscow while the Tundra is good enough for Tokyo (e.g. QZSS, see also the orbit)? Or are there other meaningful distinctions?

They are definitely not identical.

Tundra is geosynchronous; period = 1 day. The eccentricity allows it to spend most of the time over a region of Earth off the equator, something not possible for geostationary (sit always over one point on equator) or circular geosynchronous orbits (sinusoidal function with slow-down at both extremes). Tundra is intended for a single satellite to observe one specific point of Earth.

Molniya is an orbit intended for 3-satellite constellations and it has a period of half a day. It's also used to observe two off-equator regions of Earth, 180 degrees of longitude apart. It utilizes the similar "dwelling" effect of a satellite staying for a long time near apogee, above roughly the same region of Earth (not nearly as narrow as in case of Tundra though), and by the time the satellite leaves the apogee, another from the constellation approaches it, and enters region of interest for the observation.

The most important part is about the trajectory over ground: 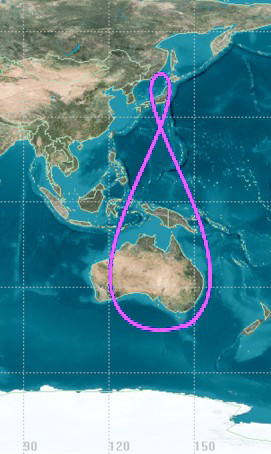 In Tundra, the satellite spends most time over the "narrow" top part of the figure 8, then dashes through the lower part, to return to the top.

In Molniya, there are three satellites on exactly the same track over ground, 1/3 period apart. They dash through the long southern stretches, then dwell on the northern "peaks".

Due to Earth rotation, the ground track rotates, so their RAAN are actually 120 degrees apart; also, their true anomaly is such, that their epoch would differ +8/0/-8 hours if the true anomaly was identical.

Tundra: observing one point of Earth, for most of the time. (also possible to use two or three satellites for 100% time coverage).

As for main technical differences, Molniya requires three separate launches, but Tundra requires a stronger booster to reach the higher orbit. Also, Tundra's somewhat higher apogee may require stronger radio connection or result in worse results due to higher distance; the difference is not big though (about 15%).

This is an addendum to SF.'s already excellent answer regarding why such orbits are inclined by roughly 63.4 degrees.

5
Are there terms for Earth orbits with rational number multiples of 1 sidereal day?
5
What are the advantages of a Molniya orbit over a tundra orbit?