The title refers to the promotional slogan "What happens in Vegas, stays in Vegas."

The question How much CO2 would city-to-city rocket flight produce compared to airliners? seems to be focused on CO2 contribution to the Earth's atmosphere.

For example, at sea-level, all exhaust remains, and probably by the time one is passing the moon, nearly none of it has a chance to enter the atmosphere due mostly to geometry.

But roughly where would be the cross-over point for a typical LOX/RP-1 launch vehicle's exhaust, where roughy half escapes and half remains?

It’s meaningless to talk about orbital dynamics for gases. The mean free path up through and including cis-lunar space is much shorter than any useful orbital path. For example, figure 14-6 in Champion et al shows the mean free path as a function of altitude: 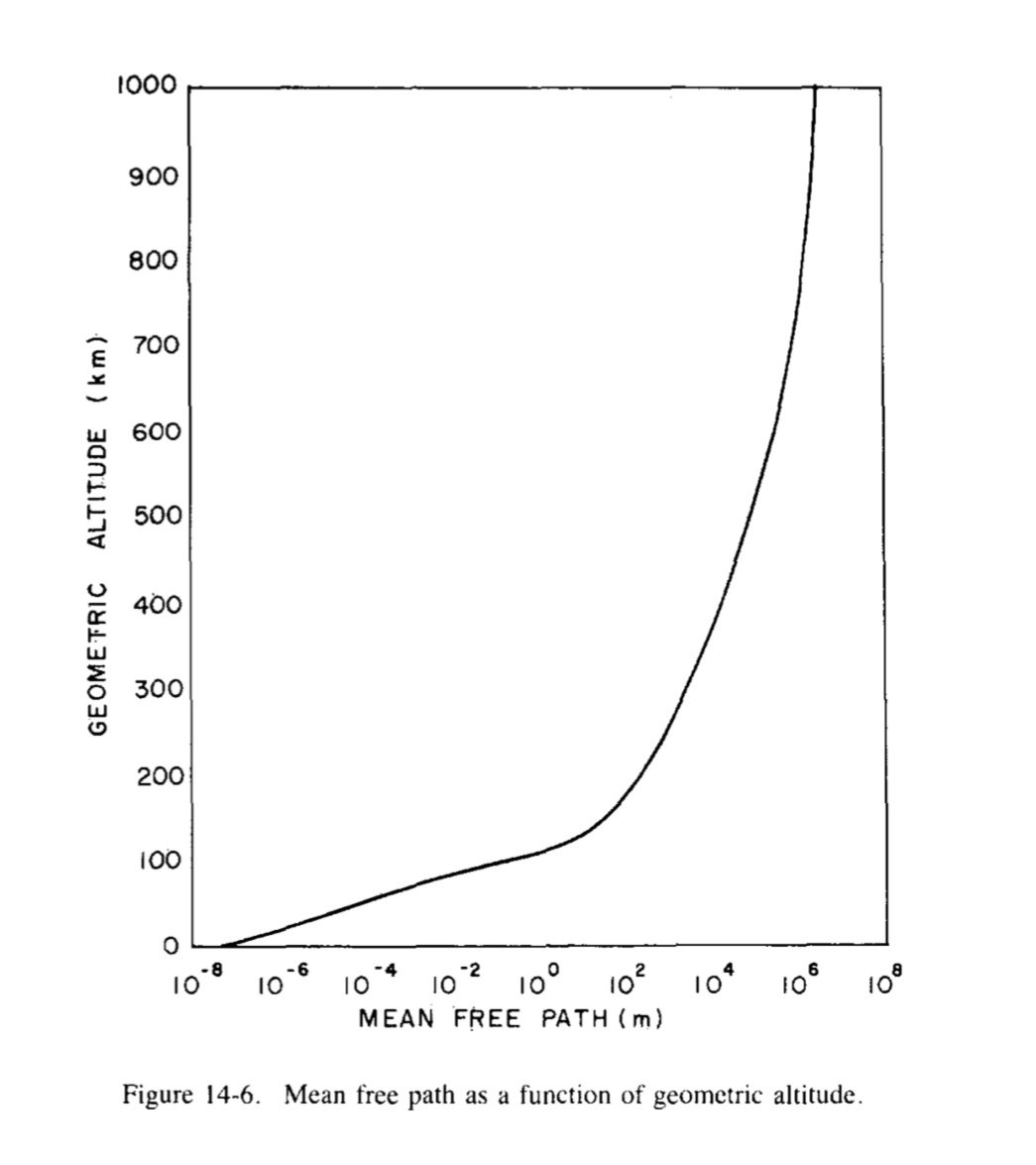 It grows to only a few thousand km by lunar orbit. So any ejected gas is going to be brought into equilibrium to the ambient gas before it can realistically escape, or even orbit for any significant time.

So then, the answer to this question

is there some point above which most rocket exhaust would not become part of Earth's atmosphere?

depends on what one means by atmosphere.

The answer to that second bullet depends on timescale somewhat.

There's a lot of research on vertical mixing times in the high stratosphere. Unfortunately, it's mostly paywalled, but this 1997 paper gives you an idea of the complexity and issues: There are multiple mechanisms involved, different parts of the globe have different conditions, and the distribution of drivers is (still) not clear.

The bottom line is that mixing up to 30-50km definitely happens, and the timescale is years to a few decades.

Above that, at low orbital altitudes, the atmosphere's mean free path gets long. But it's not long compared to the size of the atmosphere, and the inter-collision time isn't long compared to years. It's clear diffusive mixing takes place, but that's slow, slower than observation. It's not clear which bulk mixing mechanisms are dominant (in particular, the role of collisions with ions is getting a lot of attention and more than a few academic arguments), but over decades bulk mixing is clearly present.

What's not clear in the literature, at least to my knowledge, is the answer to exactly the question asked here: What is the timescale for mixing across the bottom of the thermosphere and across the top of the stratosphere?

If it's solely driven by vertical-balance diffusion, then the time scale would likely be centuries. But there might be mechanisms driven by i.e. solar and ionic interactions that speed the mixing up significantly. It's a tough region to probe, and it's not clear when this will get sorted out.

So the answer is "No, not if you wait long enough, but we don't know how long that is yet"

Virtually all exhaust will stay inside the atmosphere, most of it in the very high atmosphere. In order for it to leave, it would have to reach escape velocity. It's actually going the wrong direction, and thus won't have the energy to escape. Some of it that is light enough, like leftover hydrogen, might escape, but it won't be that much. The only exhaust that might escape Earth is for interplanetary missions, which depending on the trajectory the final bit of exhaust might escape the atmosphere, or retrograde exhaust from an orbital mission.

I suspect that almost all launches from Earth will leave the rocket exhaust in Earth orbit, soon to return to Earth, particularly because most rocket firings happen nearly in the prograde direction, which means the exhaust will have less energy then the rest of what's around.

Of all of the environmental affects that are on the watch list for rocket launches, Ozone depletion is the largest concern, followed by soot/ particles, and then on to CO2 emissions.

Let's look at a transfer orbit, it's orbital velocity at apoapsis, escape velocity and exhaust velocity.

and the critical exchaust velocity is that which shooting out the back of a spacecraft at apoapsis, moving at $v_{apo}$ would still have escape velocity:

There are certainly spacecraft put in Earth orbit out that far, but they are rare.

For most satellites put in orbit closer to Earth, the exhaust does not reach escape velocity. Instead, the exhaust orbits the Earth and will slowly mix its momentum with other atoms of the atmosphere and begin to thermalize and mix physically with the atmosphere.

It's a whole 'nuther ball of wax for electric propulsion! Back at the "turn of the century" (i.e. 2001) satellites to GEO were all (or nearly all) sent with conventional chemical propulsion. These days all-electric GEO telecommunications satellites are all the rage because it saves so much weight. In addition to using electric propulsion for station keeping which was developed earlier using arcjets, now ion propulsion is common both for station-keeping and going from LEO to GEO by spiraling outwards.

You can estimate the exhaust velocity of an ion engine using

Choose $E=$ 100 keV and $m_0 c^2=$ 931 MeV times 50 to 200 AMU and you get between 0.2 and 0.1% of the speed of light, which is way beyond escape velocity. You can safely assume that any angular momentum gained by electric propulsion in Earth orbit at or beyond reasonable LEO is compensated by an equal and opposite angular momentum of ions flying out of the back of the spacecraft. Depending on the scenario they could become trapped by the Earth's magnetic field and spiral into Earth's poles, thereby assuring that the angular momentum is transferred to the Earth's solid body, or if far enough away, leak out into the solar system after bending in the Earths' magnetic field, making it more complicated.

So I've just asked Where do ion propulsion's ions go? Do they remain in the solar system or shoot out into interstellar space? 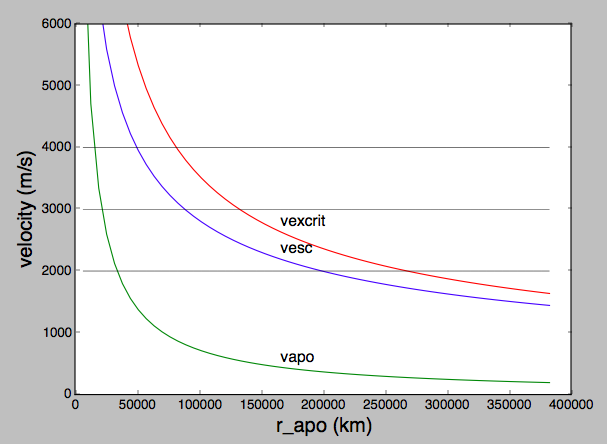 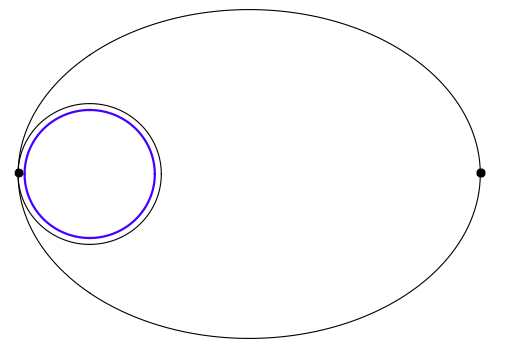 Well, kind of. Gas is similar to anything in space: if it's in orbit, it won't come down until the atmosphere or solar radiation decays it's trajectory enough. But no matter what, it will settle onto the top of the atmosphere if it stays in orbit. If it escapes the Earth's gravitational pull then it will never come down.

It's not necessarily a matter of altitude, but more of the orbital trajectory of the particles.

As for the crossover value, it depends on the engine, namely its exhaust velocity and plume dispersion, as well as the ascent profile of the rocket. So the answer is that there isn't really any set threshold that will define, for all rockets on LP-1/LOX or any other fuel combination, when 50% of the exhaust will fall back to Earth and 50% will not. It is entirely dependent on the particular rocket launch.

Let me rethink my answer...

Let's assume a Merlin 1D from SpaceX as an example, running on kerosene and oxygen.

If the rocket is at the end of its orbital insertion burn into LEO, then it will be traveling at orbital velocity, 7,800 m/s. If the exhaust leaves the engine the other way at 3,050 m/s, then the final velocity of the exhaust would be 4750 m/s, well under orbital velocity. It will be recaptured by the atmosphere.

If the exhaust is to leave the Earth forever, then it must be traveling away from Earth at escape velocity, 11,200 m/s, and then some to account for other forces. That means that the rocket itself must be traveling at escape velocity plus the exhaust velocity: 14,250 m/s. The rocket must be well on its way out of the Earth's gravitational influence if it is to stay in space.

Again, this leads to the same answer that there is no practical 50%. It is more of a binary returns-to-earth or doesn't-return-to-earth outcome. Altitude is not important, it is velocity and direction of the exhaust that matters.

Not the answer you're looking for? Browse other questions tagged rockets atmosphere exhaust or ask your own question.

17
What artificial satellite has the farthest orbit around the Earth?
7
What kind of engine does this Isp = 1600 refer to? Is it cubesat-friendly?
11
When a planet loses atmosphere, where does it go?
8
What prompted all of those private launch companies to get into the business?
8
What is the highest non-equatorial earth orbit used?
7
Why does Earth's atmospheric density have a big "knee" around 100 km? Is there a good analytical approximation?
5
Are we changing Earth's rotation?
5
How does methane waste produced by the ISS interact with our Atmosphere?
8
How much CO2 would city-to-city rocket flight produce compared to airliners?
10
what happens to particles that escape the atmosphere on planets in the solar system?
See more linked questions

8
What does the exhaust plume of a rocket look like in vacuum?
39
What "actually" happens at T-minus-0
6
What happens to the last stage of rockets?
10
Challenging the Kármán line from above
3
Does velocity of the exit gasses of a rocket affect visibility of the plume?
3
Why does the exhaust plume apprear to be throbbing?
2
During reentry, does the flux stay laminar? Should become turbulent the capsule could not mantain attitude