Why did the "Secretive SpaceX Zuma Launch" make a big "S" or yin-yang shape in the sky?

The Space.com article Strange Sky Spiral May Come from Secretive SpaceX Zuma Launch shows images from this Tweet and this tweet, the second of which was posted by Dr Marco Langbroek (@Marco_Langbroek):

There is a lot more Zuma-related orbital mechanics Dr. Langbroek's twitter (and extensive blogposting) as well.

Is this unburned propellant, if so, why would this need to be done, and in any event, what gives it this particularly distinctive shape? 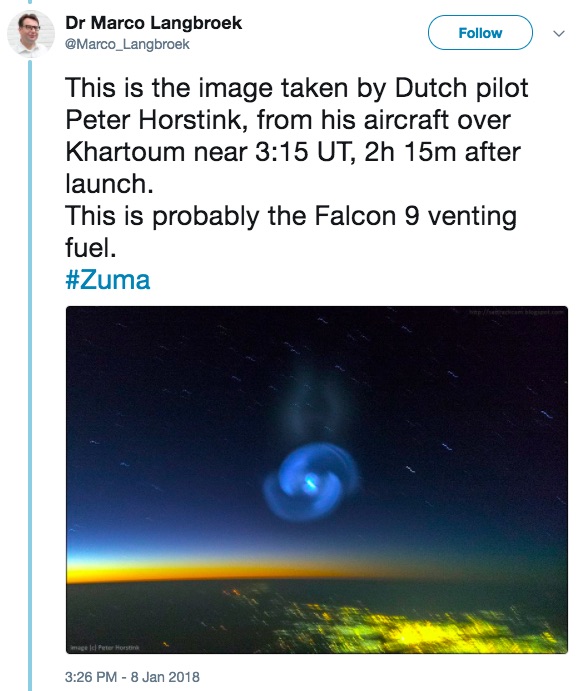 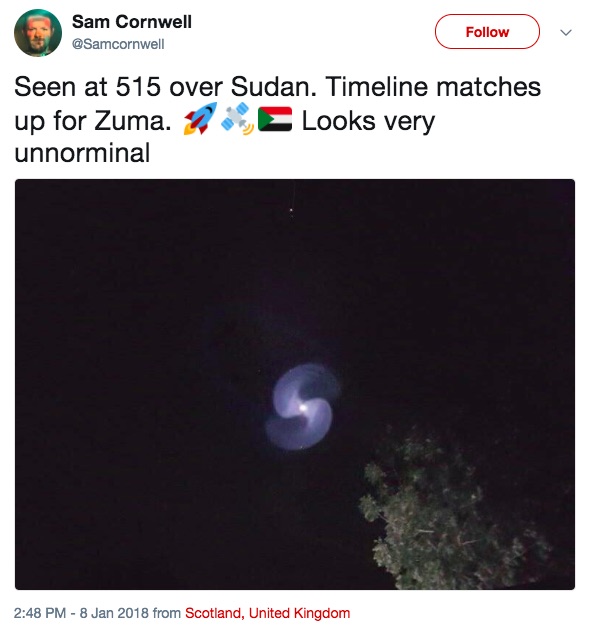 All of the reports are that this was expending the unspent fuel from the second stage. There have been other sightings of unburnt fuel dumping, such as this one:

In the other instances, there appeared to be more of a cloud, in this instance, it appeared to spin.

Now, why the difference? The most likely culprits:

I suspect it was one of these, but it's really hard to know for sure. I doubt SpaceX will release the reasoning behind this, so for now, one will have to live in the realm of guesses.

Not the answer you're looking for? Browse other questions tagged spacex falcon-9 fuel zuma visual-signature or ask your own question.

10
What's happening in this photo?
12
Why is one of these two concurrent fuel-dump spirals blue?

9
Why did the US lose almost all commercial launch opportunities?
5
Would it make sense for SpaceX to launch from Boca Chica and land in Florida (or somewhere else)?
13
Why did SpaceX choose gas thrusters over reaction wheels/CMGs?
5
Why are the cells on grid fins square in shape?
20
Why won't SpaceX launch a rocket for a month?
26
Why did SpaceX retire Falcon 1?
19
What was the outcome of the launch of ZUMA by SpaceX, to the best of the public's knowledge?
27
Why is SpaceX building the Big Falcon Ship before the Big Falcon Rocket?
0
Why did Roadster (Starman) look fuzzy before the long burn to deep space started?
6
Why did SpaceX choose vertical integration for Starship?