Many websites consistently claim that the first stage of the enormous Sea Dragon rocket was intended to be reusable. While recovering a giant booster from sea after a splashdown may seem tricky, it does not break my suspension of disbelief - I am willing to believe that the terminal velocity of a huge, but (mostly) empty tank is low enough to achieve this feat.

But yesterday I stumbled upon the Vintage Space blogpost Sea Dragon is the Biggest Rocket We Ever Dreamed Of. Out of a lot of interesting design details, one seems ridiculous for me - second stage reuse! Behold:

Second Stage recovery would be similar, though its return to Earth would begin with small retrorockets in the nose since it would be coming home from orbit. After atmospheric reentry, a skirt similar to the one on the first stage would slow it to the desired impact speed [...]

Is it even remotely possible? I mean, the second (and last) stage should have (if I understand correctly) a velocity pretty close to the orbital velocity. How is it supposed to survive reentry, then? Especially when retrorockets are described as "small"? (at least "small" by Sea Dragon standards)

The linked blogpost in the question is from a series of Vintage Space posts in Discover Magazine. Amy Shira Teitel also has an extensive series of informative and enjoyable videos on her Vintage Space YouTube channel.

The video Sea Dragon is the Massive Rocket of Spaceflight Dreams is worth watching for a helpful breakdown of the Sea Dragon proposal. I've transcribed her discussion of the recovery of both the first and second stages between 06:07 to 07:19. The last paragraph indicates that Aerojet asserts that the proposed Sea Dragon implementation would be a series of solvable engineering challenges.

The first and second stages were both recovered at first just using just simple aerodynamic braking as they fell through the upper atmosphere, but the active stage of recovery would be using an aerodynamic deceleration device.

This decelerator was a reliable, and very easy system. It was a large conical flare 300 feet in diameter, that could be pressurized with the same pressurizing gas as was used in the pressure-fed engines for each stage. This also ensured that both stages would hit the water at the correct nose-down orientation, a way that would minimize the forces and stresses on the body such that it could be refurbished easily and reused, as opposed to building a new one. After the first and second stages both splashed down, they would be recovered and towed back to the assembly lagoon. There they would be refurbished, and any parts that need replacing could be replaced. But at the end of the day, most of the rocket could be just refurbished, mated together again in that lagoon, and used again on another Sea Dragon launch.

Additional discussion of recovery development can be found throughout this report dated a few weeks later.

Aerodynamic stabilization and deceleration of the stage will be attained with an inflatable flare similar to the one used for first stage recovery. The size of the flare will be smaller than the flare used on first stage. The available tank pressure is lower, 50 psi, however, the recovered weight is also lower, 1.2 x 10E6 lb. This 50 psi tank pressure, available for axial load reactions,corresponds to a terminal velocity of 210 ft/sec for which a flare diameter of 240 ft is required.

Aerodynamic heating for second stage recovery will be more severe than for first stage. Use of flare material with higher thermal resistance_ such as Rene 41 mesh and ablative coatings will be necessary. 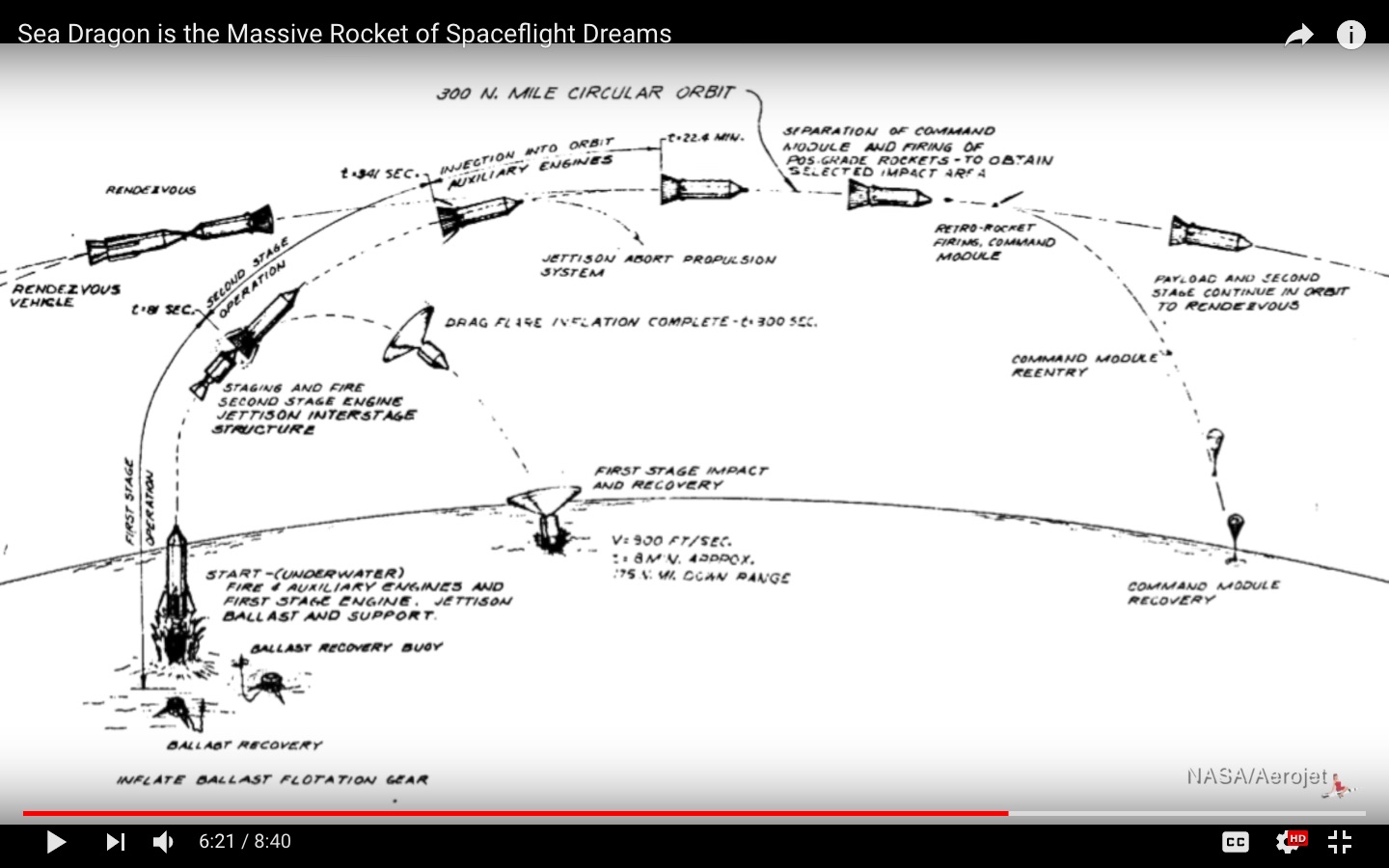 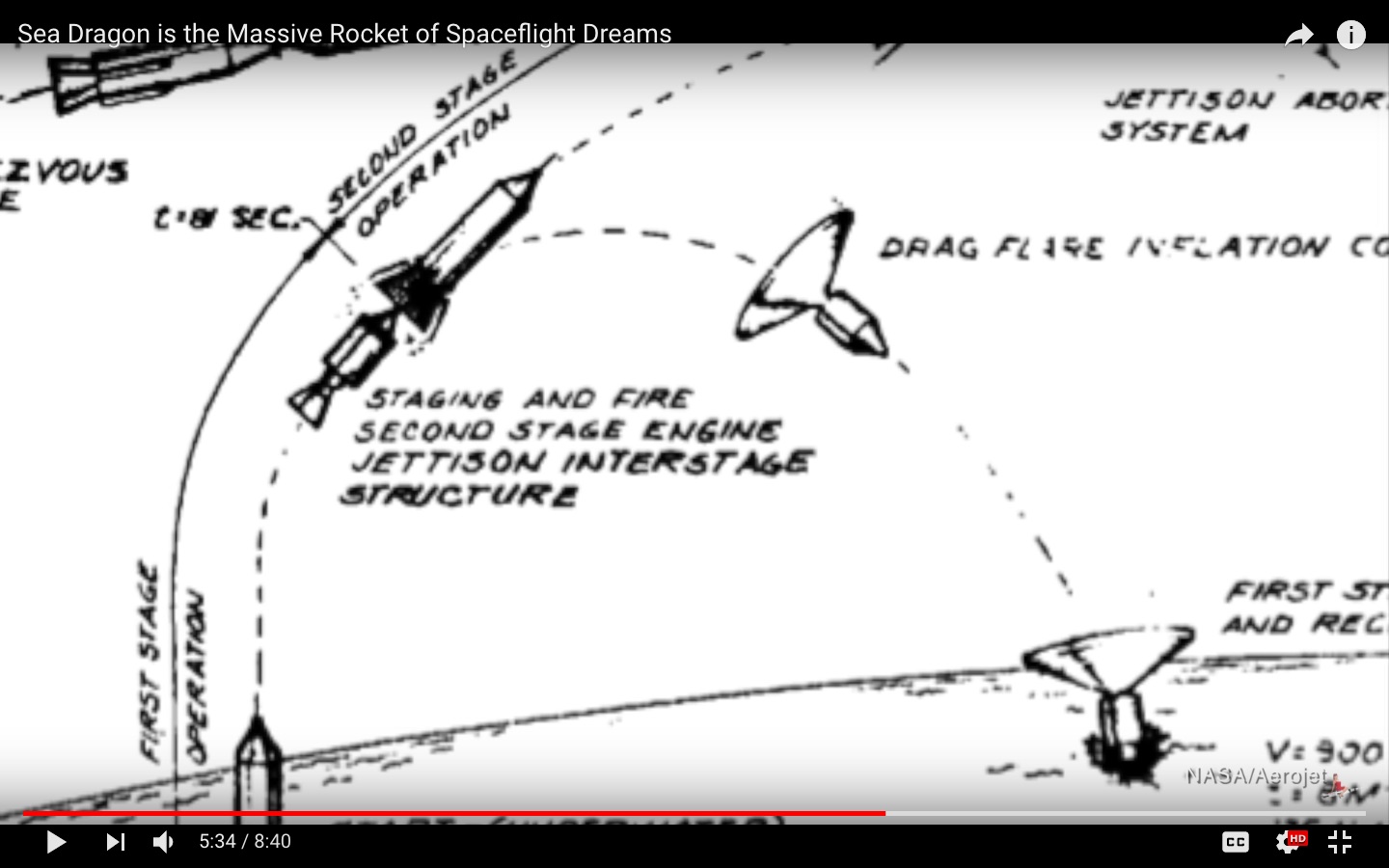 Not the answer you're looking for? Browse other questions tagged launch reuse launch-vehicle sea-dragon or ask your own question.

3
Falcon 9 1.1 demo flight (flight 6) - Was the second stage burn meant to test deorbit?
9
What was SpaceX's original vision for booster reusability?
11
Falcon 9 second stage impact on first stage trajectory
21
How does SpaceX plan to achieve reusability of the Falcon 9 *second* stage?
2
Sending the second stage into a parking orbit
27
How realistic would the Sea Dragon engine be to produce given today's technology?
3
SpaceX second stage altitude decrease?
1
Has an object ever been put in orbit where the first stage was always at maximum thrust?