Suppose Zuma wasn't "lost" — what would it take to detect it?

Being a secret government launch, there has been speculation maybe the Zuma satellite wasn't lost, and claims to the contrary are a ruse to throw off parties who'd like to track it. There is possible precedent for this, the Misty satellites, one of which was reported lost a few weeks after launch. However, amateur astronomers tracked an object that could have been that satellite. From the link:

A week after launch, reports were released from the Soviets that six bits of debris had been detected suggesting an explosion had occurred. The Pentagon announced that any debris would decay after six weeks. The amateur astronomers and observers that were tracking this object only catalogued five out of the six pieces. Six months later an unidentified satellite was discovered in orbit on a similar trajectory to that of the classified payload was released, leading the satellite spotters to suspect it was the missing piece, nick-named Misty. However a couple of noticeable manoeuvres later, Misty disappeared again. Perhaps the ‘explosion’ was a decoy to put Misty into place unbeknownst to the Russians.

Taking the general idea of hiding a satellite by reporting it lost after changing its orbit, what are the limits on how successful such an approach can be? How much could its orbit plausibly have been changed? Would searchers need to scan the whole sky or could they still narrow the search to certain latitudes and orbits? To what degree is it plausible that the search could be hampered by reducing the satellite's visibility?

First of all, what do we know about it's orbit? From the direction that the rocket took off, we know it's inclination was about 50 degrees. That could be adjusted higher in flight at a time that is difficult, but that's probably about right. That information and the launch time effectively confines the orbit into a plane.

Less known is the altitude. The altitude makes two primary differences. The first is the tendency to precess depends on the altitude. The effect is that the plane of the satellite will tend to rotate with time. The second, and far more noticeable, is that the location within the plane will change considerably given a small variation in speed. As altitude is speed, that can vary quite a bit. From the observed fuel dumping maneuver, it is assumed that the satellite is at the higher range, around 900-1000 km, but that is a bit difficult to verify. If that was incorrect, the altitude could be as low as 400 km.

Next, how can amateurs find it? The best way is to look at the visible light. The easiest time to see that is when the satellite is in the light, but it is local night time. For most LEO satellites, this window is about an hour and a half from sunset/ sunrise. It's really hard to say how bright it will be, because we don't know much about it, but likely it will be at the edge of visibility, maybe magnitude 4-7. The time where it will pass overhead in the light, but with Earth in dark, makes it very difficult to observe for the first week after launch, at least for most of the amateur classified satellite observing groups.

A nodal precession of a satellite's orbit can take a considerable time. The orbital altitude has a large range, 400-1000 km orbit. Most likely it will tend towards the 1000 km range, but 400 km is at least possible. Using the following calculators, one can get a fair idea of the nodal precession. If I've done this right, the precession rate varies between 5.58 deg/day and 3.92 deg/day for the provided orbital range. That means the drift rate between the two is 1.66 deg/day.

Okay, so how can one find Zuma today? Essentially, we know the plane relatively certainly, with the plane possibly having drifted 10 degrees between worst case assumptions. More worrisome is that we don't know at all where in the plane the satellite might be.

Okay, so what does all of that mean? The best bet to finding Zuma is to search along the entire plane of the orbit, and assume a few related planes as well. If it isn't found within a few weeks, it will become increasingly more difficult to spot at all, and if it isn't found in a few months, then it is effectively lost.

If an initial observation can be made of the satellite, then one can narrow the altitude considerably, which will improve the likelihood of observation for all future dates, even if it does have significant propulsion capabilities.

If it isn't observed within a few weeks, or even a few months, one can keep looking for unknown satellites with the 50 degree inclination. That is going to be somewhat difficult to do, but it might turn up at some point in time. There aren't a huge number of classified satellites known to be at that inclination, so it would be more likely to stick out.

Best bet, if you want to find it, know if it was found, etc, take a look at SeeSat, which tracks classified satellites.

There are other wavelengths than those discussed in this answer. On the off-chance that Zuma might broadcast data or telemetry, Canadian amateur astronomer Scott Tilley used a nice antenna and SDR to probe the sky for signals.

The first post in his extensive blogging on the signal in Riddles in the Sky, A blog dedicated to observing, mostly classified, satellites. Tilley says:

Over the past week the station has been dedicated to an S-band scan looking for new targets and refreshing the frequency list, triggered by the recent launch of the mysterious ZUMA mission. This tends to be a semi-annual activity as it can eat up a lot of observing resources even with much of the data gathering automated the data reviewing is tedious.

Upon reviewing the data from January 20, 2018, I noticed a curve consistent with an satellite in High Earth Orbit (HEO) on 2275.905MHz, darn not ZUMA… This is not uncommon during these searches. So I set to work to identify the source. 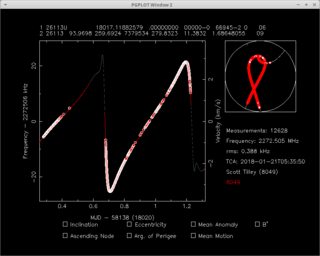 That this method discovered a satellite that was still transmitting that was otherwise (at least generally*) unknown indicates the veracity of the method.

Of course, a stealthy spacecraft that did rely on RF would likely use stealthy techniques - careful timing, short, irregular bursts at odd frequencies, tightest possible RF beam consistent with diffraction, etc. and since optical communication is now an established (though not yet commonplace) technology, there's no guarantee a stealthy spacecraft would generate any intentionally-transmitted RF, but like the slogan for the New York State Lottery so aptly summarizes, "Hey, you never know!"

From What's Up with That?

That is, until Scott Tilley started looking for Zuma. “When I saw the radio signature, I ran a program called STRF to identify it,” he says. Developed by Cees Bassa, a professional astronomer at the Netherlands Institute for Radio Astronomy, STRF treats Earth-orbiting satellites much like binary pulsars–deducing their orbital elements from the Doppler shifts of their radio signals. “The program immediately matched the orbit of the satellite I saw to IMAGE. It was that easy,” says Tilley.

Tilley communicated the find to NASA. According to WRAL

Rather than wait for NASA's Deep Space Network, already busy with communications for active missions, a team of engineers assembled the gear necessary and set-up a receiving station of their own behind their GSFC office building. Richard Burley, mission manager for the joint NASA/NOAA polar satellite program, confirmed that from multiple acquisitions of RF signal that match the orbit, spin and signal characteristics, "all indications so far suggest that, in fact this is IMAGE."

Click the image below for better view of the receiving station(?) 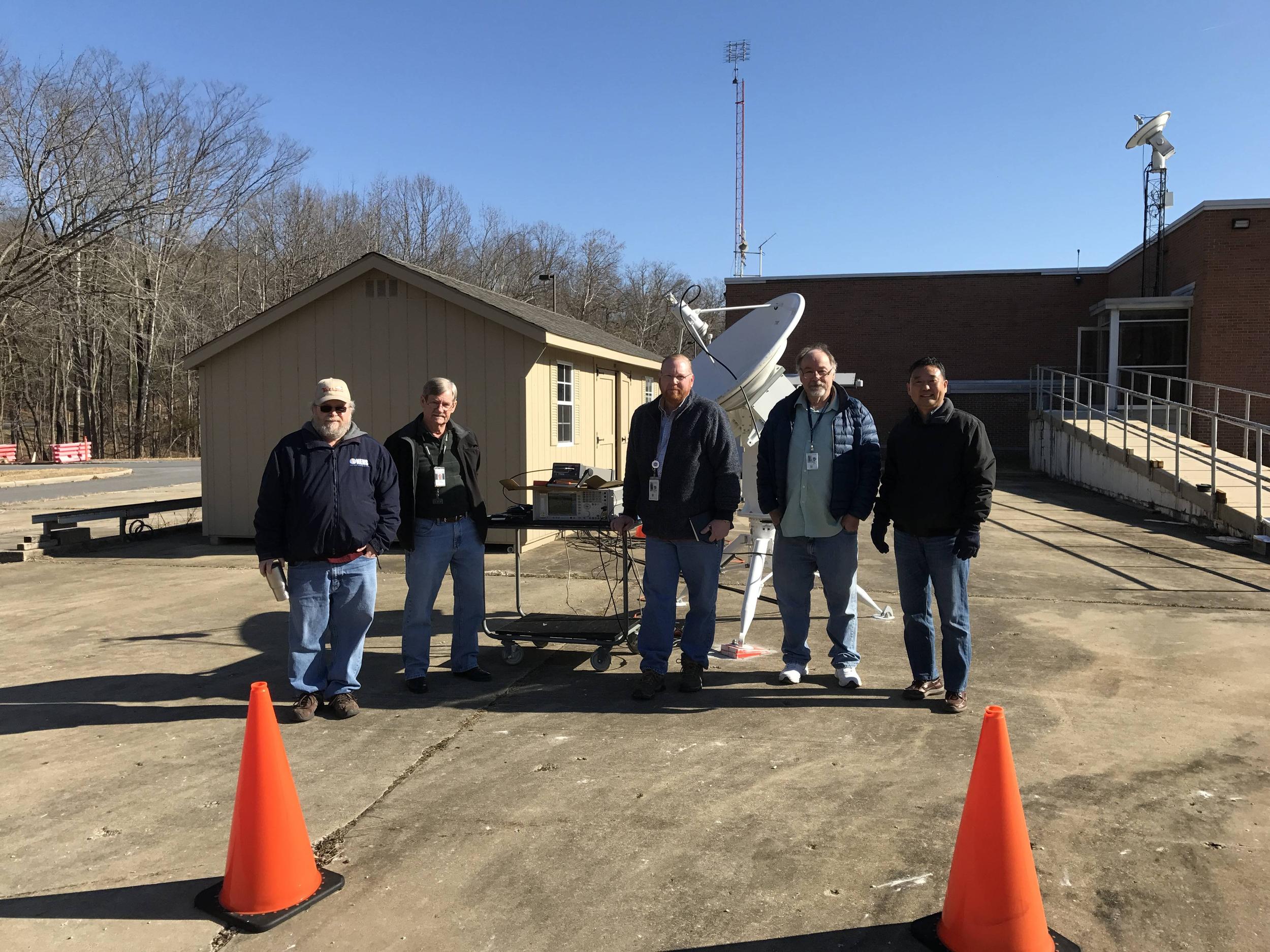 above: a team of Goddard Space Flight Center engineers, confirming transmissions from [IMAGE]. From here.

*at least generally: As Tilley mentions Cees Bassa confirms that IMAGE had been transmitting for years.

20:06 UTC – Dr. Cees Bassa a fellow satellite tracking enthusiast completes review of his data archive which shows IMAGE signal as early as October 2016 and no detection in January/February 2014:

Not the answer you're looking for? Browse other questions tagged tracking security classified detection zuma or ask your own question.

39
Are there any space probes or landers which regained communication after being lost?
31
Is it possible to track an object as small as the Tesla Roadster around the Solar System
16
Is there any way to determine the fate of Chandrayaan-2?
9
How well could a satellite hide from Earth detection?
5
Is it possible for amateurs to determine the orbit of satellites
15
What satellites can I receive Images from with a radio?
3
Did Zuma complete at least one orbit?
2
How is Prospero doing now? Was it really heard in 2004 and have there been recent attempts to contact it?
1
Vela 1A and IMAGE "once were lost, but now are found"; are there any more "lost" satellites thought to still be in Earth orbit?

4
What would be a "big picture" understanding of how the orbits of Earth satellites are monitored?
6
Did Zuma "bump" NASA?
2
What kind of payload is Mission 1390 (Zuma) going to launch?
19
What was the outcome of the launch of ZUMA by SpaceX, to the best of the public's knowledge?
10
How does the SpaceBEEs' experimental passive radar reflector work?
11
Are commercial communications satellites in GEO being constantly monitored by telescopes?
7
How could RCA Satcom III have been completely lost? (Or was it?)