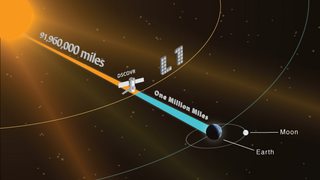 IceCoLoIceCoLo
11
$\endgroup$
Add a comment  |
Highly active question. Earn 10 reputation (not counting the association bonus) in order to answer this question. The reputation requirement helps protect this question from spam and non-answer activity.

16
Why would a mission to Sun-Earth L1 have an instantaneous launch window?
2
Difference between approach maneuvers to the insertion points of halo and Lissajous orbit?
2
Did DSCOVR travel "along the stable manifold of its future SE L1 Halo orbit" to get there?

3
How many satellites/probes will or have travelled outside the solar system?
7
PUZZLER: Around how many solar system bodies are there Legos in orbit?
5
How much Delta-V would be required to escape the Gravitational Influence of the Earth without entering orbit?
6
What are the G forces leaving Earth orbit?
3
Have there been any spacecraft with an ecliptic Earth orbit?
8
Have any humans orbited the Earth in anything other than a prograde orbit?
23
If someone built a vacuum tunnel through the atmosphere, could you have an orbit with a sea level perigee?
2
How many spacecraft orbiting the sun?
5
How many time-zone does the ISS cross through during one orbit?