Did DSCOVR travel "along the stable manifold of its future SE L1 Halo orbit" to get there?

I just wrote (and have since removed) the following paragraph in this answer to How many times do you have to circle the Earth to break orbit?:

As can be heard in this video SpaceX's launch of the DSCOVR spacecraft to Sun-Earth L1 went there almost directly. The first secondary engine cut-off (SECO-1) was at about T+ 00:08:40, and after what the announcer says (at about T+ 00:09:50) would be "in about 21 minutes", the secondary stage's second burn would put it in to a Heliocentric orbit (along the stable manifold of its future SE L1 Halo orbit) on its way to the SE L1. Considering that a LEO orbit is about 90 minutes, DSCOVR was in Earth orbit for roughly half of one Earth orbit. (emphasis added)

DSCOVR would need about four months to arrive in its final orbit, and explained in the answers to Why would a mission to Sun-Earth L1 have an instantaneous launch window? was probably traveling along the most efficient (lowest Δv) path to arrive there.

edit: Based on comments, I should explain that my use of "probably traveling along the most efficient" comes from a reading of the paper Resurrected DSCOVR Propulsion System – Challenges and Lessons Learned that nicely describes DSCOVR's propulsion system and lists the two mid-course corrections used:

The first planned thruster maneuver was the MCC burn, which was designed to correct any launch dispersion in the spacecraft trajectory. Since the Falcon 9 trajectory resulted in a low launch dispersion, the MCC #1 burn only required a burn duration of 37 seconds (0.4895 m/s). The maneuver was performed successfully 32 hours after launch. 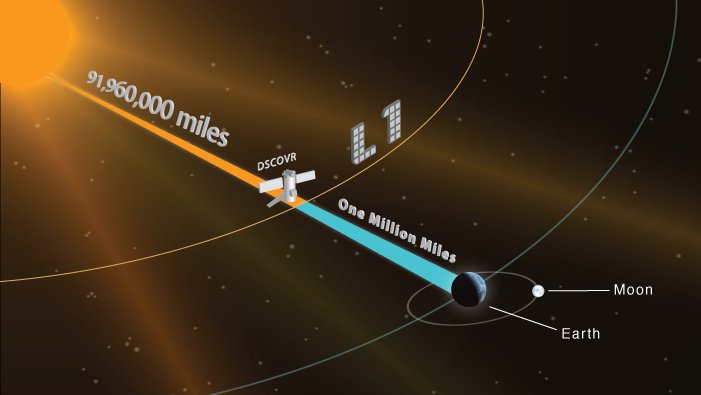 30
How many times do you have to circle the Earth to break orbit?
16
Why would a mission to Sun-Earth L1 have an instantaneous launch window?
15
What is a near rectilinear halo orbit?
7
What asteroids have the least delta-v to reach?
9
How would you identify when an object in a Lissajous orbit needs station keeping?
10
The design of the halo orbit of the James Webb Space Telescope
9
How many SpaceX 2nd stages are in heliocentric orbits?
5
How do spacecraft reach Lagrange points?
11
Why is a near rectilinear halo orbit proposed for LOP-G (formerly known as Deep Space Gateway?)
12
Low Energy Transfer within Earth-Moon system
See more linked questions

4
Do ("non-halo") Lissajous orbits have stable/unstable manifolds?
6
Why put DSCOVR in a Lissajous orbit? Wouldn't a halo orbit completely avoid the Sun exclusion zone?
6
Is the Gateway's halo orbit bound to Earth? Would the Gateway remain in Earth orbit if the Moon disappeared?
5
Can L3 have halo orbits?
6
Is there a fairly detailed outline of CAPSTONE's "highly efficient ballistic lunar transfer trajectory" from LEO to lunar near-rectilinear halo orbit?
10
The design of the halo orbit of the James Webb Space Telescope
5
Why did we think that the object was gonna hit the Moon March 4th 2022? Who's been tracking and predicting it so closely?
5
Is the JWST halo orbit period sync'd with earth's elliptical orbit about sun?
5
Where is the Wind going? Where has it been? (Global Geospace Science spacecraft 1994-071A)