How can ICEYE-X1 capture 2D high resolution SAR images in “tens of seconds”?

The full image transmitted to the ground from ICEYE-X1 exceeded 1.2GB of raw data and spans an area of roughly 80 x 40 km on the ground. ICEYE-X1 obtained the image in the span of ten seconds, traveling at a speed of more than 7.5 km/s and at an altitude exceeding 500 km. Matching what ICEYE simulated prior to the launch, the final data resolution from the first satellite reaches 10 x 10 meters.

Synthetic Aperture Radar works by mathematically combining radar data recored from a number of different physical locations, effectively synthesizing a large effective aperture defined by the cluster of different locations. For imaging the Earth from space, this is done using the movement of the spacecraft itself along-track, and if I understand correctly, for full 2D imaging of the surface the cross-track sampling comes either from a large physical span of antennas (see for example this question) or from closely-spaced ground tracks of completely different orbits.

The quoted passage says that the image was taken in only tens of seconds, which I believe means that there are not multiple passes used here. Since the full width of the spacecraft is only about 3.2 meters, and the wavelength is probably not much less than a centimeter, the cross-track resolution at an altitude of 500 km should be about 1km.

edit: Looking a the images, edges facing towards the top are much brighter than those facing the bottom, suggesting reflections were recorded obliquely rather than top-down (nadir). I'm wondering if the rate of change of path length being different for different cross-track positions might be the distinguishing feature producing resolution in that direction.

below: "First Light" image from the press release. Open in new window to see full size. The SatCat hasn't even sorted out the payload objects of 2018-004, and one of them is already "Tweeting" images back to Earth! 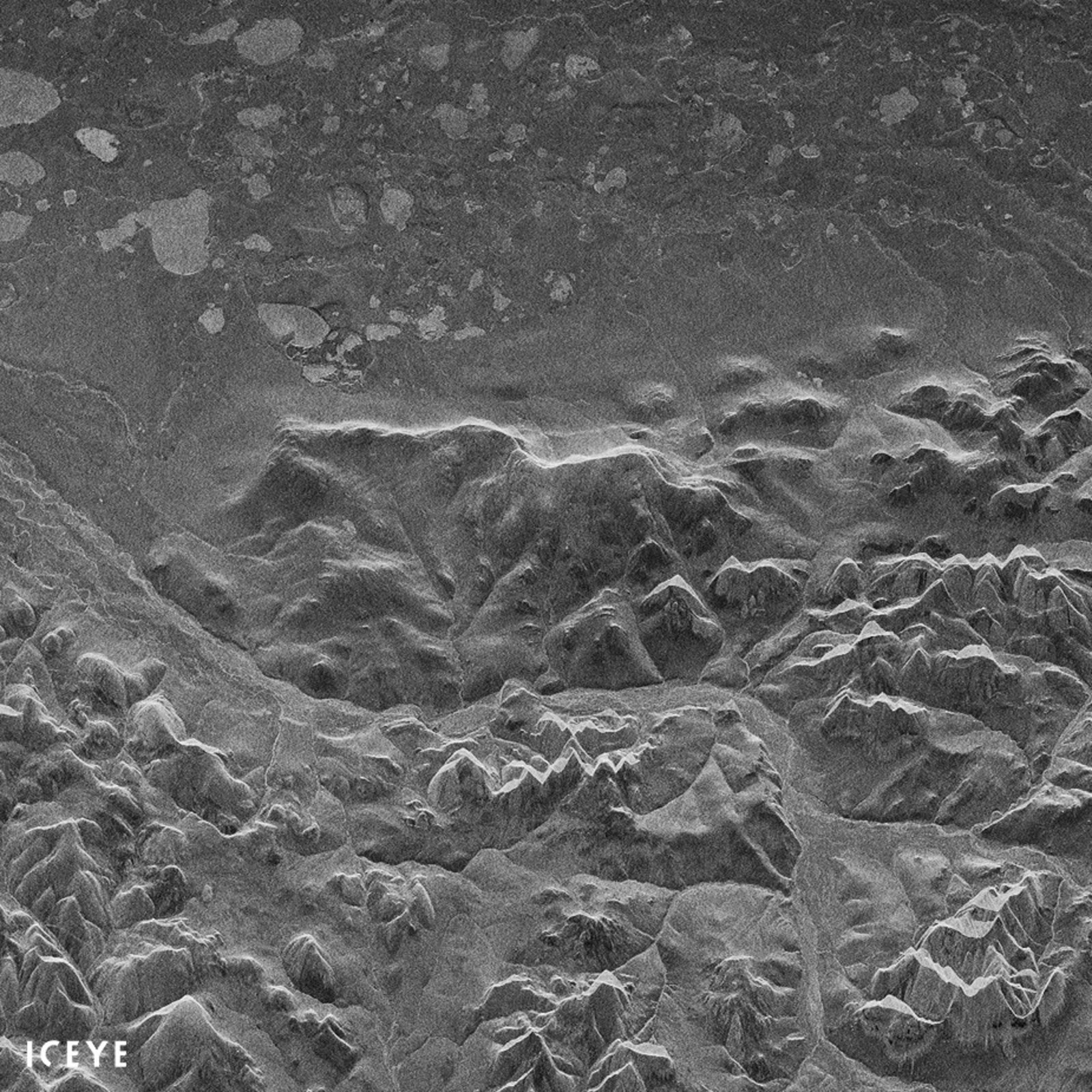 ICEYE-X1 does not have a vertically large antenna, so it can only provide 2D data. To interpret the image correctly, you can imagine the satellite crossing over the top of the image from left to right, looking sideways. The axis are:

None of these measurements requires a large antenna. Resolution along track is provided by the synthetic aperture and resolution in distance is naturally good with any radar (it only depends on bandwidth).

A 3D-capable radar would be able to give ground distance and height instead of just slant range.

A few issues with what you included:

It also seems that the actual beamwidth might be 200 km. If that is the case, it seems likely that they concentrate it on the 80x40km section, but have increased resolution otherwise.

Note that repetition time is 6 kHz, meaning that 6k images are used per second, or at least 60k during the time period over which the satellite passes overhead.

Full disclosure: ICEYE employee, I'll try my best to answer. Thank you for asking and being interested in ICEYE-X1!

The "amount of seconds" refers to the amount of time the satellite is actively imaging data for an individual frame.

I would not recommend referring to the current Spaceflight101.com article for technical specifications on ICEYE-X1.

The original Alaska image in the CISION/PR Newswire press release has unfortunately been upscaled by the service itself to 1600x1600 pixel size, which may have caused unnecessary confusion. The "original" released image on the ICEYE website press release section is the correct one (925x925 pixel png file) to look into, but that file is compressed down from the true original.

More ICEYE-X1 SAR imagery at a far higher resolution has recently been made available on the company website (for free but requires filling in a form), which you may find to be informative and valuable to answer these questions.

Not the answer you're looking for? Browse other questions tagged imaging radar synthetic-aperture-radar or ask your own question.

35
Why are photos from Juno such low resolution?
4
Is delay-doppler radar imaging of NEO asteroids possible only if it spins fast enough?
2
Parallel orbits around the Earth - effectively?
5
Can image-stacking allow this 0.25 m satellite telescope achieve 0.65m resolution?
10
Is there really a frozen lake near the equator on Mars?
3
What are these bright streaks in MODIS Earth images? Why are they shaped this way?
5
Why are the gaps in MRO global images of mars so irregular and sometimes filled in?
13
Detailed radar imaging of Tiangong-1; how do they do that?
6
How (the heck) was coherent synthetic aperture radar (SAR) implemented using photographic emulsion aboard Apollo 17?
9
Star-shaped artifacts in SAR images of the “Suez Canal traffic jam seen from space”