Soyuz has a Space Periscope?

The image Photo ID: ISS049-E-003166 can be found in Flikr and Wikimedia Commons as well as in Spaceflight Now.

There is a long (perhaps 1 meter?) green structure that is sticking out from the side of a Soyuz spacecraft. It has windows on the end that look like they might be for the mirrors of a periscope used for docking.

What is it for? What kind of optics are in there? Presumably during launch it is not deployed like this; is it mechanically extended like a submarine periscope, or does it fold out after a fairing deploys after launch? 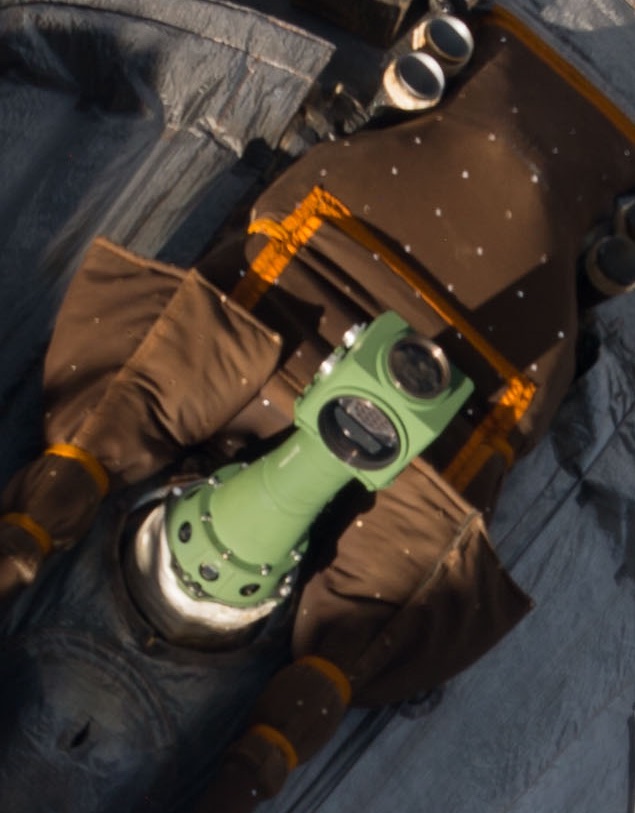 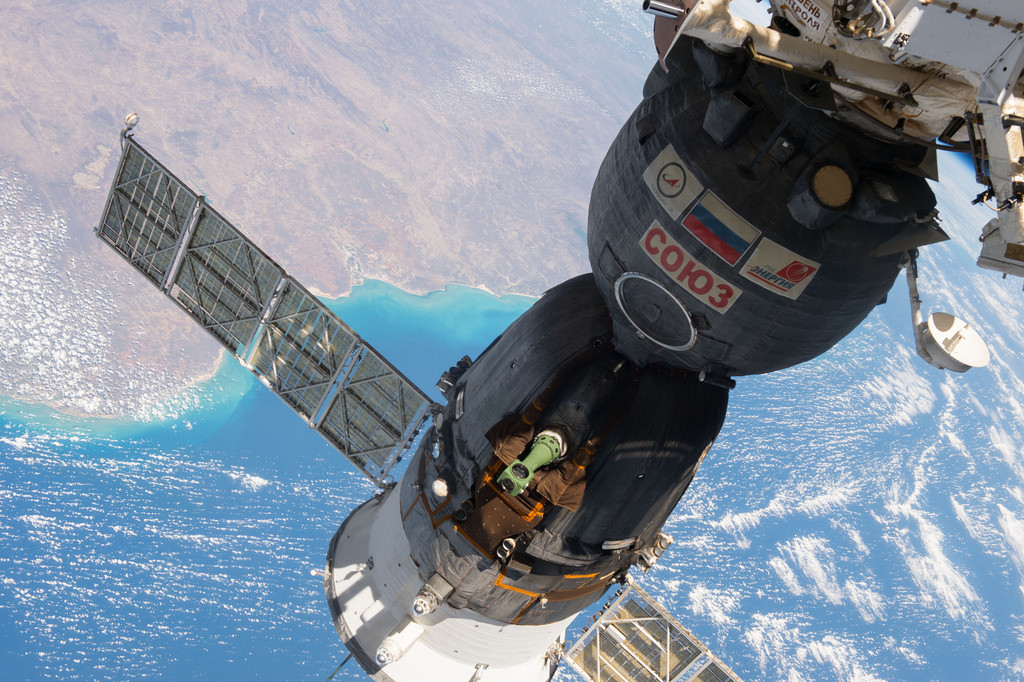 The Russian designation for the device (at least the transliterated designation) is BCK-4. Here's the writeup on it from the Soyuz Crew Operations Manual (reference at bottom of answer). 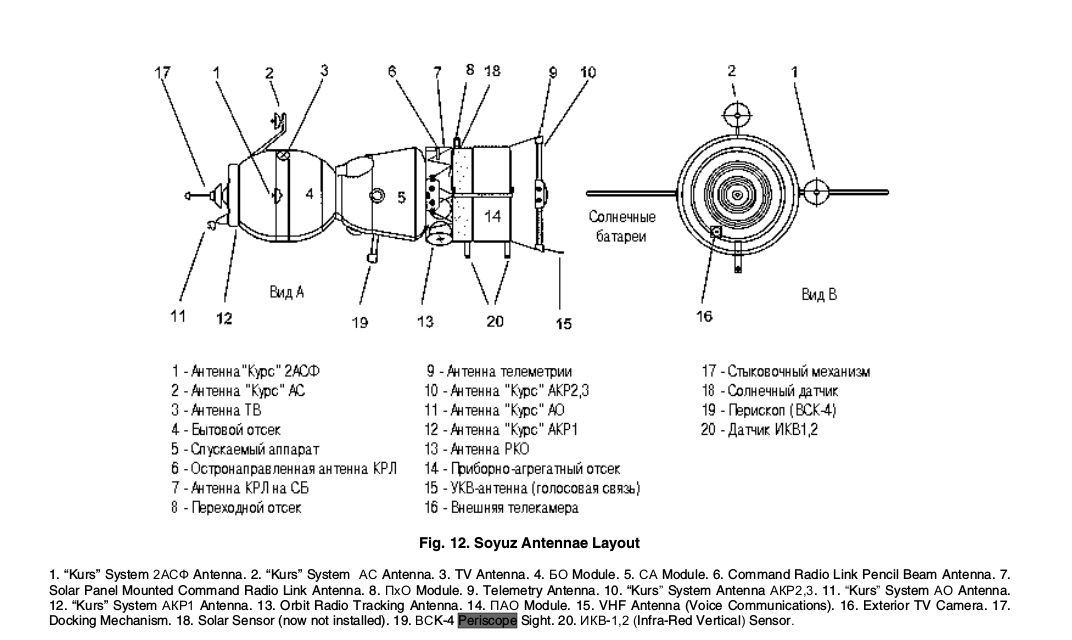 The BCK-4 has external and internal (cabin) parts which are installed on the window located in the CA o Module at the spacecraft “-Y” axis. The instrument visor axis is 6 inclined relative “-Y” axis. The external part consists of the central viewing tube and the peripheral tubing unit . The instrument line of sight can only be in two fixed positions: 0 degrees (“Ориент”) (Attitude Monitor) and 84 degrees (“Причал”) (Berthing). The position is changed by turning the mirror unit in the central tube head using an electric motor. The cabin part includes the instrument body with elements of the two optical systems and the control knob panel (Fig. 1). 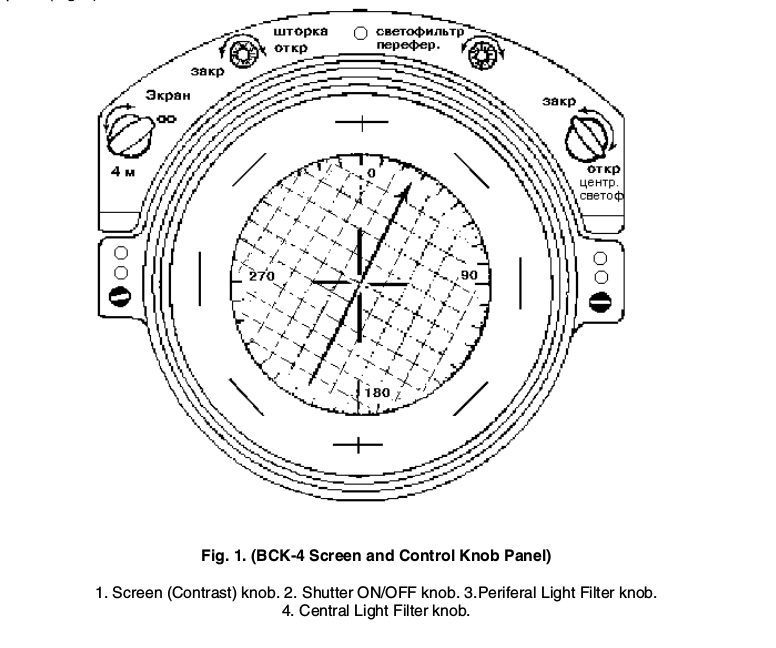 The “Центр. Светофильтр” (Central Light Filter) knob is used to insert a neutral light filter into the central optical system field of view.The “Экран” (Screen) knob is used for focus adjustment by moving the screen along the visor axis. Rotating the “Светофильтр периф ep” (Peripheral Light Filter) knob a dark light filter can be introduced into any of the eight peripheral tubes. The “Шторка” (Shutter) knob purpose is to shut off the field of view of all the eight peripheral tubes simultaneously.

Crew operations with the BCK-4

Throughout all the orbital flight the crew uses the BCK-4 as the principal instrument for monitoring the spacecraft attitude and attitude maneuvers for which the visor axis is set into the “Ориент” position by КСП-Л В-18 command.

The basic attitude - orbital Earth coordinate system (OCK) with preset heading angle is considered established when the reference object (Earth) apparent run direction in the central system field of view is parallel to the heading indicator stroke rotated at the preset angle. And the Earth horizon in the screen peripheral zone must be parallel to the corresponding strokes or coincide with them.

For approach/docking the visor line is set in the “Причал” position by the КСП-Л В-17 command. At the range of 2 km the crew selects the screen according to the illumination conditions. In the shadow the lens screen is used and in the sunlight the matte screen is preferable. At this range it is possible to estimate the range using the screen grid. Charts and tables for range determination by the target angular size are included into the FDF ((“Nominal Modes”).

The ВНУК-К Night Visor is used for visual monitoring the spacecraft heading attitude through the BCK-4 at the shadow part of the orbit and for observing faintly illuminated object through the window.

The Infrared rays are passing through the collective (adapter of BCK-4 and ВНУК-К optical systems), then through the objective and are focused at the ЭОП converter input plane. The ЭОП converts the IR signal into video image which is viewed by the cosmonaut via the biocular. The biocular and objective are fixed to the ЭОП by screwed joints and the collective is connected to it by means of special pin locks. For the spacecraft heading attitude monitoring a rotatable grid is used. The ВНУК-К Visor principal controls are located at the ЭОП converter: 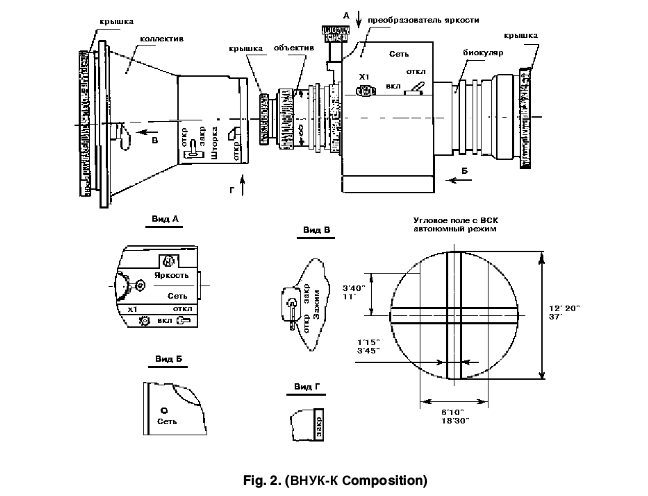 ВНУК-К is used at the shadowed part of the spacecraft orbit for monitoring orbital attitude system (ОСК) and for the target acquisition and its attitude monitoring during approach and docking in the shadow. When operated jointly with the ВСК-4 it is necessary to: take the covers off, open the shutter, switch ON the “Сeть” toggle switch at the ВНУК-К and using the “Яркость” knob adjust the image brightness to optimal level. To monitor the spacecraft heading attitude using the “Сетка” knob match the grid vertical strokes with the terrain run direction and read the angle on the knob scale. When the ВНУК-К is operated in autonomous mode it is necessary to dismount he collective. Other operations are similar to those of the joint mode with the ВСК-4. After every 5 hours of the ВНУК-К continuous operation an interval of 30 minutes is necessary.

You can find a copy at this page.

It is used for star alignments, which is a backup system in case of serious navigation errors. It can also be used for manual docking operations, if required.

As is mentioned in this question, it is discarded prior to reentry. During launch, it is under the shroud, as seen below.

@OrganicMarble's thorough and well-sourced answer does an excellent job. I happened to have spotted the screen in this (currently) six year old NASA Johnson video Inside the Russian Soyuz Spacecraft. Here's a screen shot and a brief transcription of some of the information explained by NASA astronaut "Mike Fincke, a veteran of the Soyuz and Shuttle..."

You can see the actual location of the periscope's screen from the viewpoint of the astronauts, and how it might be used to view situations, for example if moving manually if the Kurz system has an issue.

You can see there’s a screen right here, it’s a periscope that looks out either in front of the vehicle, or below us, as well as some control sticks here so we can actually manually fly from the center seat. 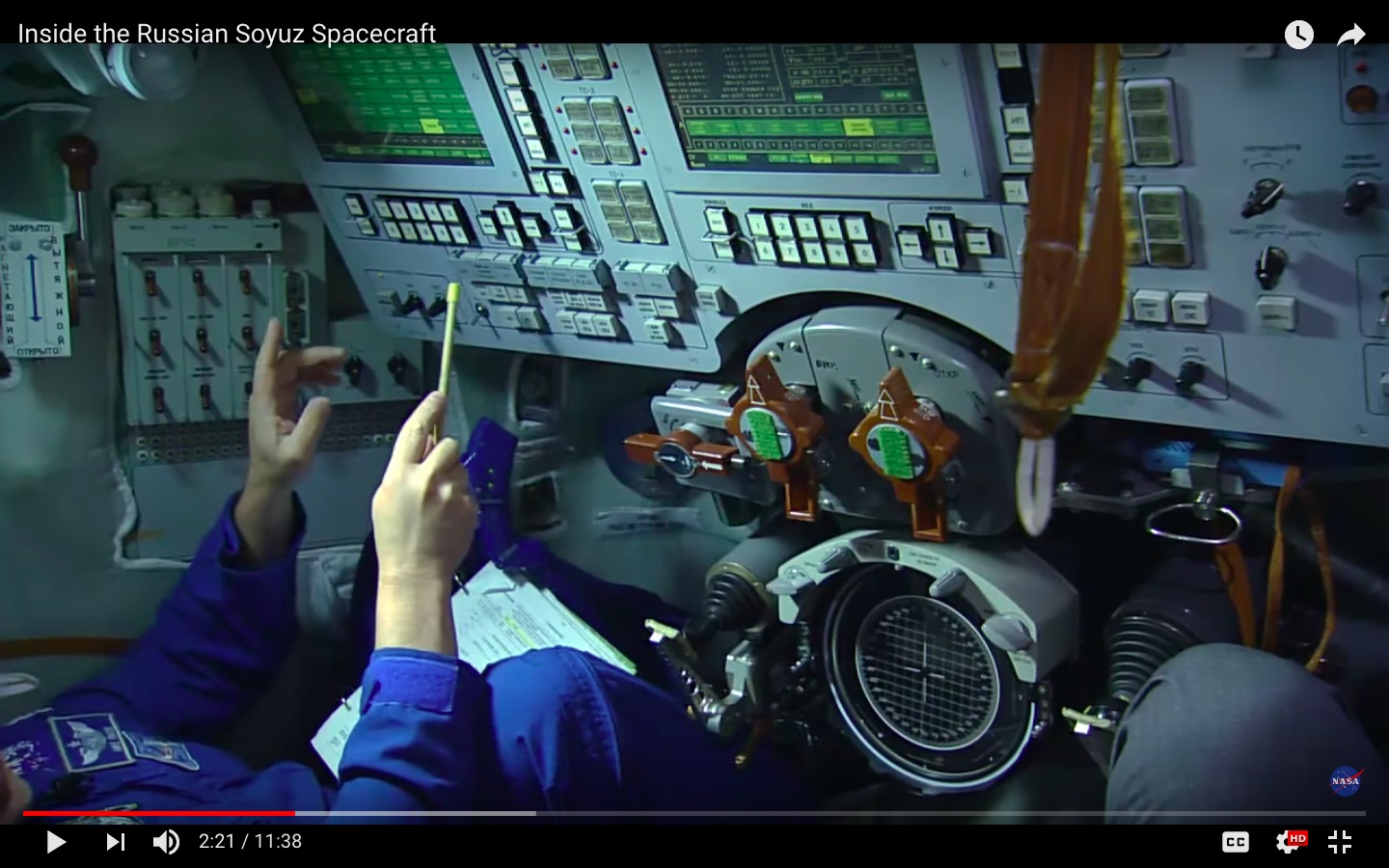 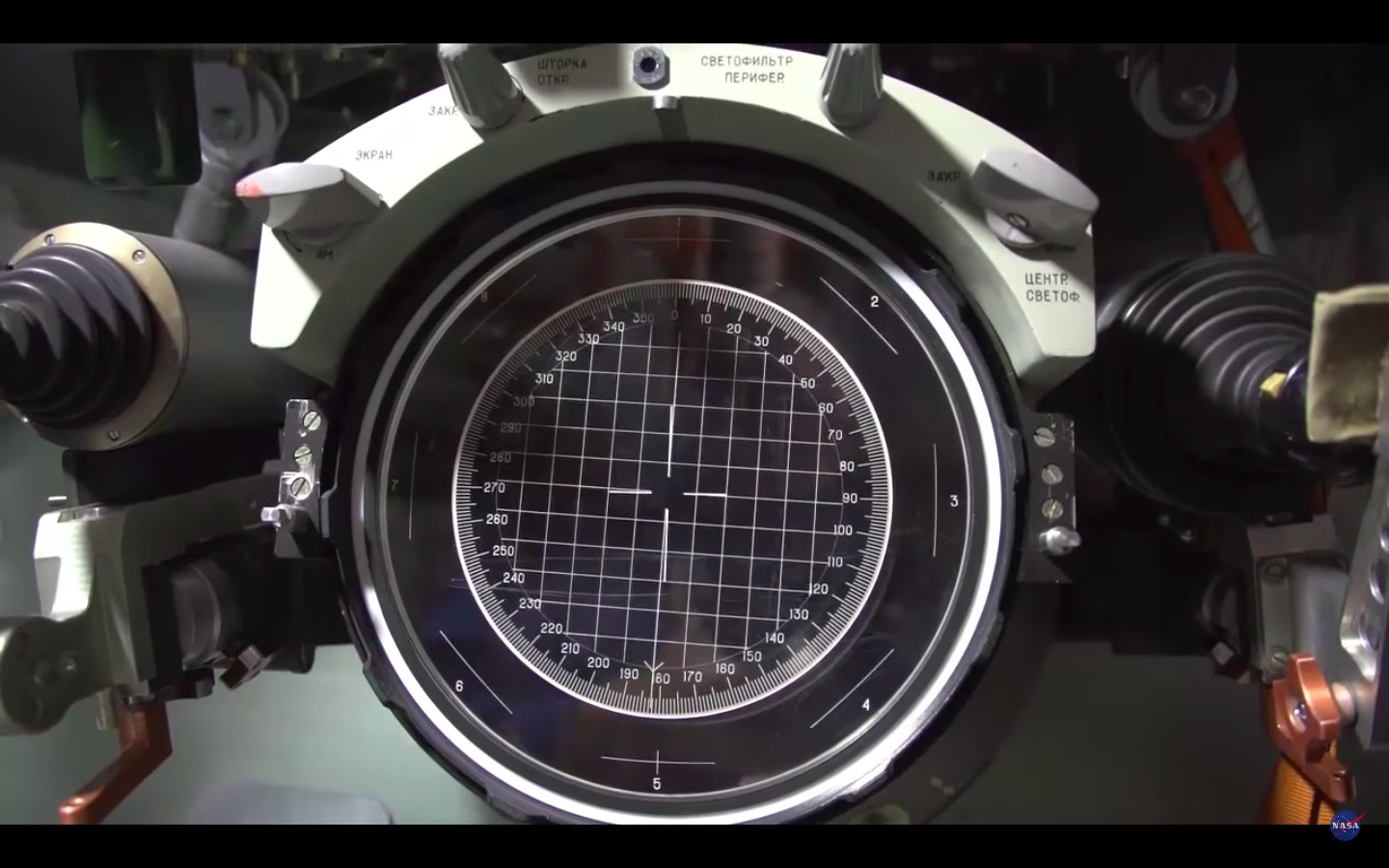 below: Earthy visiting the Soyuz capsule and checking out the periscope's screen. Source David Saint-Jacques/CSA 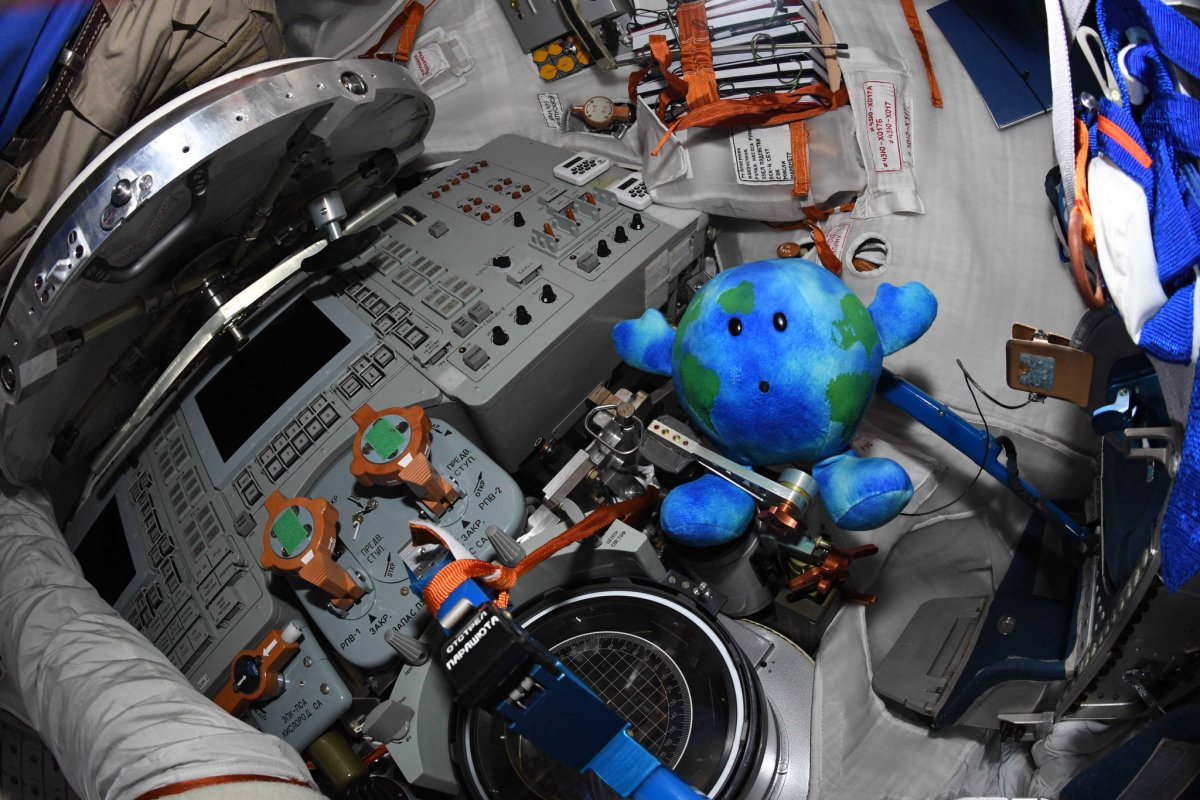 Not the answer you're looking for? Browse other questions tagged launch reentry soyuz-spacecraft navigation docking or ask your own question.

14
How is the periscope port on Soyuz spacecraft secured for the atmospheric reentry?
1
How often are fewer than three astronauts present when moving a Soyuz spacecraft from one docking port to another?

14
How is the periscope port on Soyuz spacecraft secured for the atmospheric reentry?
9
What purpose do these red "horns" on the Soyuz 2-1B payload fairing serve?
8
What module(s) on the ISS do the Soyuz dock to?
11
What are the numbers on the Soyuz docking cam?
12
Is the location and time of a scheduled re-entry (e.g. Soyuz) announced in advance?
4
Do the Soyuz spacecraft bringing astronauts and supplies to the ISS use Ukraine-built Kurs systems?
12
Is this smoke from Expedition 53 returning Soyuz capsule?
5
Why will the Soyuz MS-17 be relocated on the ISS?
7
What is this thing on the right of the frame in this photograph? (STS-71)