How well would a broken bone heal in zero gravity?

We know that being in space has negative effects on bones. If you had a broken bone is space would it heal ok? Has there ever been a broken bone healed in space? Other then Spaceflight osteopenia would there be any concerns like the bone not knowing how to grow because of the lack of gravity?

Studies, simulations and observations reported in the National Space Biomedical Research Institute's document Fracture healing in spaceflight and in a ground-based hypogravity analog conclude that

Fibular fracture healing in a chronically unloaded condition is impaired when compared to the healing response in a weight weight-bearing condition.

Where the unloaded condition represents zero or a low gravity environment. The conclusions were based on the observations on test rats, finding that in low gravity:

Further, in the article Effects of Long-Duration Spaceflight, Microgravity, and Radiation on the Neuromuscular, Sensorimotor, and Skeletal Systems (Carpenter et al. 2010), it is reported that in simulated tests using rats, bone fracture repair was delayed significantly.

So, no, unless you had some means to simulate the mechanical loading (Carpenter et al. 2010) necessary for the healing process, in a microgravity environment, the healing process would be delayed and not complete (according to the simulations studied).

You are right. Bones would "not know how to grow". Fracture healing would likely be delayed or abnormal in microgravity.

Bones are piezoelectric. This means they generate electric potential when mechanically stressed. This electric field is aligned with the direction of stress. This is how bone tissue “knows” the direction and magnitude of stresses imposed on it.

Many people consider bones inert since they persist after death when the soft tissues have long decomposed. However, during life bone is constantly being re-absorbed and replaced. In cancelous (“spongey”) bone, this remodeling aligns with the piezoelectric electric fields. This cross section of the hip section of the thigh bone shows the radiating lines of bone corresponding to force distribution in the bone. 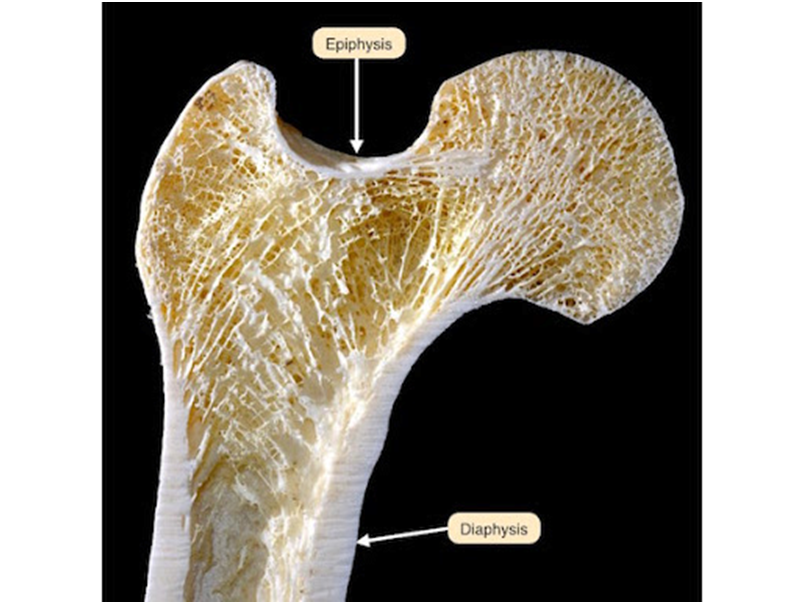 Bone healing benefits from piezoelectric effects. This is likely why bone mass is impaired in non-weight bearing mice. https://www.nature.com/articles/s41598-019-47695-3

Bone healing in microgravity may benefit from electrical stimulation https://pubmed.ncbi.nlm.nih.gov/2208859

Not the answer you're looking for? Browse other questions tagged microgravity medical or ask your own question.

37
Would a broken arm/ leg be more painful in zero gravity?

7
What research has been done into using virtual reality to counteract the psychological effects of extended space travel?
18
How do astronauts battle loss in blood volume in microgravity?
7
How might artificial gravity experiments be conducted to determine adaptation in mice?
5
Has NASA ever tested the effects of martial training to alleviate spaceflight osteopenia?
5
Have mechanical wrist watches been successfully used in space?
5
Has an IV even been performed or attempted in space?
4
Space adaptation syndrome compared to BPPV (vertigo)
18
Are all modern astronauts at least passable phlebotomists?
2
First space phlebotomy? When was the first human veinous blood sample taken in space?