Does Humanity Star have non-reflective triangular panels? If so, what are their characteristics?

Rocket Lab has successfully launched a rocket from New Zealand and placed several objects in orbit, see here for example. One payload is New Zealand's first satellite the Humanity Star, a reflective geodesic that can be seen at night by reflected light.

Unlike Mayak which was supposed to be deployed from a 3U cubesat, then inflated (which it seems didn't happen), the "secret payload" Humanity Star is rigid and filled most of the payload space within the Electron's 2nd stage payload fairing, described in TVNZ's interview of Peter Beck. This suggests it may already be visible! http://www.n2yo.com/satellite/?s=43166 seems to be Humanity Star; it correlates with the tracking option shown at http://www.thehumanitystar.com/

Humanity Star is something of an experiment. Beck isn't sure it will actually work. Made of carbon fiber materials, the sphere has 65 highly reflective panels, each about the size of a laptop. It truly is intended to act like a giant disco ball, to reflect the Sun's light back to Earth as it flies around the planet in a 300×500km orbit. It will last about nine months before its orbit begins to decay, and Humanity Star begins to fall back toward its cradle.

According to this Math SE answer, the shape can be described as a pentakis pentagonal orthobirotunda, and so should have 80 total sides as the pentakis icosidodecahedron would. In addition to the 65 highly reflective panels and the mounting face (which would account for what looks like five triangles at the bottom as seen in the 2nd image) there may be something like ten triangular panels with other functions.

Question: Does Humanity Star have non-reflective triangular panels, and if so, what are their characteristics and/or purpose? 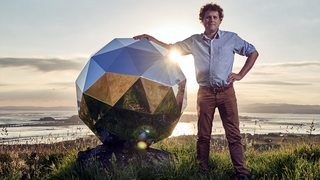 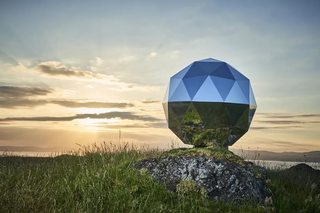 This answer links to a somewhat acerbic blogpost which points out (among other things) that the official Humanity Star official website has changed the number of reflective panels listed, from 65 to 76!

The OP suggests that the five triangles of the "bottom" pentagon might be removed, making it 75 reflective faces, but what could 76 mean?

The blogpost suggests that a single, pentagonal reflective panel is in place, which would indeed bring the total to 76.

Images from the blogpost.

I can't actually find any definitive source on if there are 10 panels that aren't highly reflective or not. You are correct that there should be 75 panels, with the bottom 5 being removed due to the mounting location. None of the photos or articles talking about it indicate anything differently.

As to why they could be missing, there is one thing that comes to mind in particular. The articles mention that it is spinning quickly. There are a few basic ways in which one could make it spin. The first would be to have the rocket spin when dropping it off. I find that unlikely. The second would be to have some kind of a magnet in it to have it line up with the magnetic field of the Earth. This doesn't tend to actually create the rotation, but rather align what rotation there is.

The more likely explanation, in my opinion, is that the non-reflective panels are there to induce rotation. Essentially if one side of a satellite absorbs sunlight, while the other side reflects it, it will create a very small rotation speed. This will be enhanced with the small size of the spacecraft.

Another explanation could be that there is some panels removed to induce the rotation through thrusters or perhaps spin-induced motion similar to what New Horizons did to start spinning. Thrusters were used by Starshine to induce spin, which was a similar project at the turn of the century.

Other explanations could be that some panels were removed to allow it to better fit into the spacecraft, or others.

In any case, in the very likely event of 10 missing panels, I'm pretty sure they have something to do with the spinning of the ball, although I'm not sure how that work work.

Not the answer you're looking for? Browse other questions tagged artificial-satellite space-art rocketlab humanitystar or ask your own question.

18
Has any payload been as silly, as the Falcon Heavy's Tesla Roadster?
15
Two week mark; has Mayak (Маяк) been spotted yet? Reflector deployed? Astronomy “ruined”?
6
What is efficiency improvement in Rutherford rocket engine?
5
What are the two very large “blue” cylinders attaching to the combustion chamber of each Rutherford Engine?
5
Has the Humanity Star been spotted yet?
3
Why would Humanity Star not be visible from North America (USA?) until March?
0
Tradeoffs using a battery/motor/gyro versus tangential thrusters to spin a spherical shell in space?
0
Most useless artificial Earth satellite
1
Attitude of the upcoming “Orbital Reflector”; will it result in good visibility?

8
Do all satellites and space probes have high & low gain antennas and what are their functions?
5
What determines if a star tracker blends two stars that are close to each other?
3
Does this electronics box, or any other non-spacecraft released by astronauts have a TLE?
2
What is the name of this space museum in Russian and does it have a website and/or virtual tour site?
2
What are/have been some dedicated launchers for the 100-1000 kg to LEO(sub 1000 km)payload market?
2
What are the shortest orbital periods used for their repeat ground track properties?