What if some future Falcon Heavy's launch put a regular boulder in orbit around Earth (as a secondary payload)? Well, not arbitrary one that lies by the edge of the road, rather something resembling potentially useful asteroids, with water ice, carbon and metal inclusions and so on. Tesla roadster is no doubts cool advertisement, but a boulder in the orbit can be a test yard for developing microgravity anchoring, drilling techniques, tugging, maybe even resource processing, and all that for a small price, so even students with cubesats technically could participate. If there was a boulder, then probably Philae lander components could have been tested before departing to the rendezvous with a comet, and we'd also knew better how to make use of NEO resources. So, the question is: do you think it's a worthy thing to do?

edit: Actually, now that I re-read your question and think about this happening in Earth orbit, there's another problem. The dynamics in Earth orbit are very different than in deep space, far from any local sources of gravity. The rock and the spacecraft are both in orbit around the Earth, and so their relationship will constantly be changing as they move in their own Earth orbits. If one is above, below, or to the side of the other, then they are not going to stay like that for more than a few minutes. Even if one is behind the other, once the spacecraft starts accelerating toward the rock, it will start drifting up, away from Earth. There are no real parallel Earth orbits, despite the discussion in the question Parallel orbits around the Earth - effectively?

If you get all the way out to a heliocentric orbit, then you can do your maneuvers over a period of hours without having to think much about the Sun.

It's always good to have a reminder just how weak gravity really is... so:

For a body with spherical symmetry you can calculate the gravitational force as if all the mass were at the center, instead of integrating. So for a body of radius $R$ and density $\rho$, the gravitational acceleration (the thing that's 9.8 m/s^2 on Earth) would be:

Plug in an example "rock" density of 5 g/cm^3 (5,000 kg/m^3) and the 4.5 meter radius of a BFR (BFRocklifter) and you get 6.29E-06 m/s^2. That is a bit less than one millionth of Earth gravity, but more importantly it is only about 1% as strong as a characteristic gravitational attraction to the crazy-shaped object 67P that Philae landed on.

That is, if the BFRocklifter could even lift it.

And, you'd have to bring up two of them in order to simulate the crazily-shaped gravity field associated with 67P. See the image below.

Also, as @Uwe points out in comments, the escape velocity is going to be much lower as well. In fact it also scales linearly with radius (for a sphere of fixed density) so it will be 100 times lower than that near 67P as well.

At this point, if it's a low mass cubesat with large solar panels, the photon pressure from the Sun is starting to become non-negligible. 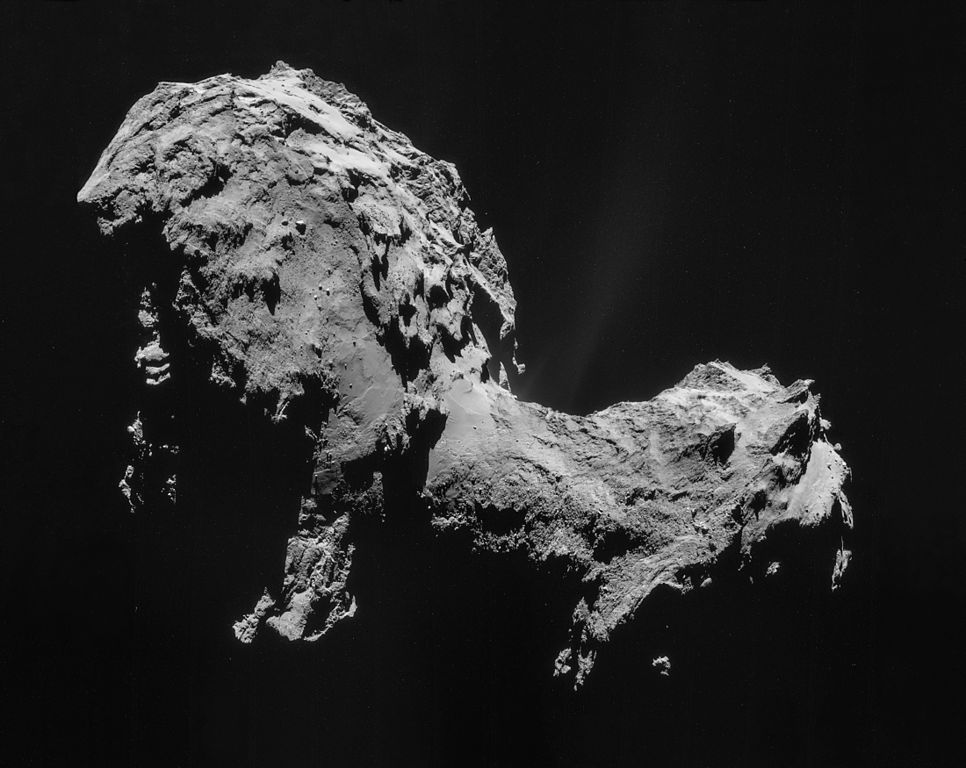 There's probably no real reason for this:

Note that the one and only reason the Falcon guys had for adding a Tesla car, was publicity. It's exactly like running TV ads or simply painting a sign on the side - it was simply a "publicity stunt". (And a good one!)

It's worth noting too that boulders are incredibly heavier than Tesla cars, or any other robots / spacecraft.

A boulder the same size as a Tesla would weigh 10? 20? X more than a Tesla. A 1-tonne piece of stone is actually quite small. (Ask any stonemason!)

I would say that for some very specific use, your surprising idea mighty actually be implemented! (If we had to test some very specific robot, which, for some reason simply couldn't be tested in gravity.) I'd say it's unlikely to be useful as a sort of "general facility". And again, bear in mind that stone is extremely dense.

(Mind you, some folks argue that the ISS achieved - nothing - other than just showing it could be done, so - who knows!)

Not the answer you're looking for? Browse other questions tagged spacecraft-development mining near-earth-asteroid or ask your own question.

6
Does Humanity Star have non-reflective triangular panels? If so, what are their characteristics?
2
Parallel orbits around the Earth - effectively?

1
Just how close to Earth will 2012 TC4 pass in 2017?
10
Can an asteroid enter Earth orbit?
9
Why did they think that S509356 was in orbit around the Earth? Where is the disconnect?
2
Most attractive resource on the Moon
2
Scenarios for asteroids 2000 QW7 and 2010 CO1 hitting the Earth?
1
What is the "interesting story" on the limitations of NASA's current near Earth object survey network"?
4
Has the National Near Earth Object Preparedness Strategy and Action Plan seen any action?
5
What is the closest asteroid to Earth worth mining?