What is the warmest place on Mars?

What is the warmest place on the Martian surface? What temperatures are seen there? (day, night, seasons, etc.)

I am asking about weather; not anything out of the ordinary such as a volcano.

This is a bit tricky to answer, as we don't have perfect global weather from Mars. But as can be seen from the images at this site, it will be a low lying area near the the equator. If I had to venture, I would say the sourthern part of Syrtis Major, but I haven't seen a high enough detailed graph to definitively answer this question. 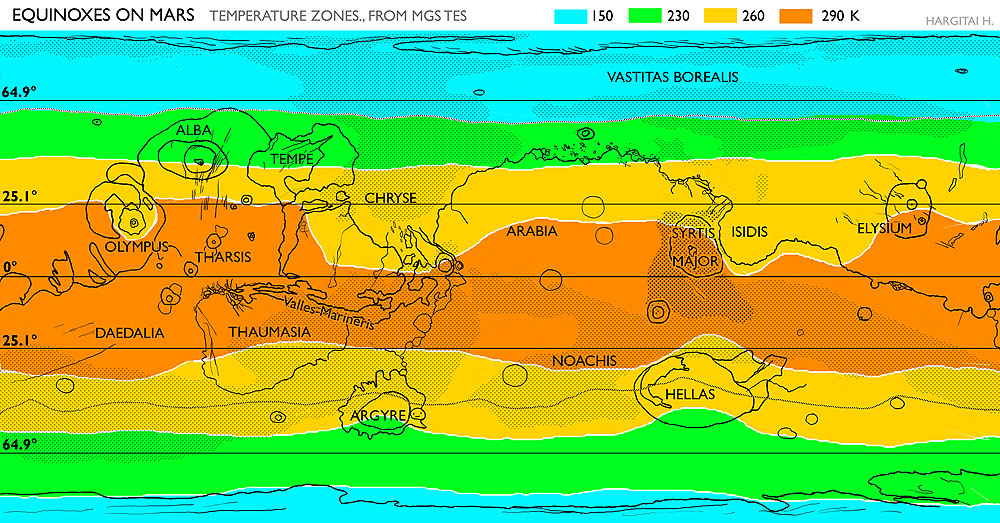 What is the warmest place on Mars during the night ?

A part of its floor has the lowest elevation on Mars of about - 8200 m ! (measured with Mars Trek)

So it has the highest concentration of CO2 and thus the warmth of the Sun during a southern summer day will be kept there the best at night ?

Plate 12 of this article shows that near the northern rim of the Hellas basin there are the highest global nighttime temperatures.

Figure 1 of that article shows that the Hellas basin is not the only region with high nighttime temperatures.
Also,it has been suggested that Badwater crater could be the warmest place because of the greenhouse effect, but the atmosphere of Mars is just too thin to have such an effect.

In Global distribution of bedrock exposures on Mars using THEMIS high-resolution thermal inertia 960 instances of very high thermal inertia regions on Mars were obtained.
Among the regions that are situated along -24$^\circ$ latitude should be the ones with the highest nighttime temperatures because there, in southern summer, Mars is closest to the Sun.
Figure 1 of Rock abundance on Mars from the Thermal Emission Spectrometer shows that the max. nighttime temperature in those regions with very high thermal inertia can be about -60$^\circ$C.

Not the answer you're looking for? Browse other questions tagged mars temperature weather or ask your own question.

10
Are there seasons on Luna?
7
Will there be a team of planetary scientists advising the Emirates Mars Mission team?
8
What are the known historic global and regional dust storms on Mars?
5
How close to the planet Mars would an object have to be to generate friction in its atmosphere?
4
Are the mountains of Venus of any help for us to explore the surface?
14
What is the surface temperature distribution of Venus?
7
Does Mars have a known "prevailing wind" direction?
5
What does NASA intend to do about the Martian day in regards to the astronauts who go there?
0
How to calculate the local maximum solar radiation on Mars from day to day throughout a full martian year?
16
Are launch windows to Mars avoided if they result in landings during dust storm season?