Will the Tesla Roadster return any telemetry?

Is there any equipment fitted to the Tesla Roadster to send signals back to Earth, even for a short time after launch?

It looks like there will be some brief telemetry. According to this article.

Several cameras appear to be mounted to the vehicle, so it’s likely that video of its insertion into what Musk said will be a “billion year elliptical Mars orbit” will be released afterward.

The second stage is not planned to detach, because you want a fairly detectable piece of space debris left behind instead of something less detectable. A large second stage + a Tesla is easier to track, than just a Tesla. Besides, you would then have 2 or more things to track if they seperated. (Does the payload adapter separate in that case for a third piece?)

From the images of encapsulating the Roadster in the fairing it does not seem like any kind of solar array was added, so powering any telemetry long term is unlikely.

Nearer to launch time, Musk tweeted a new view of the Roadster on the Payload Adapter (PLA) which shows some structure added to the PLA, probably to hold a selfie camera if nothing else. Images on Instagram 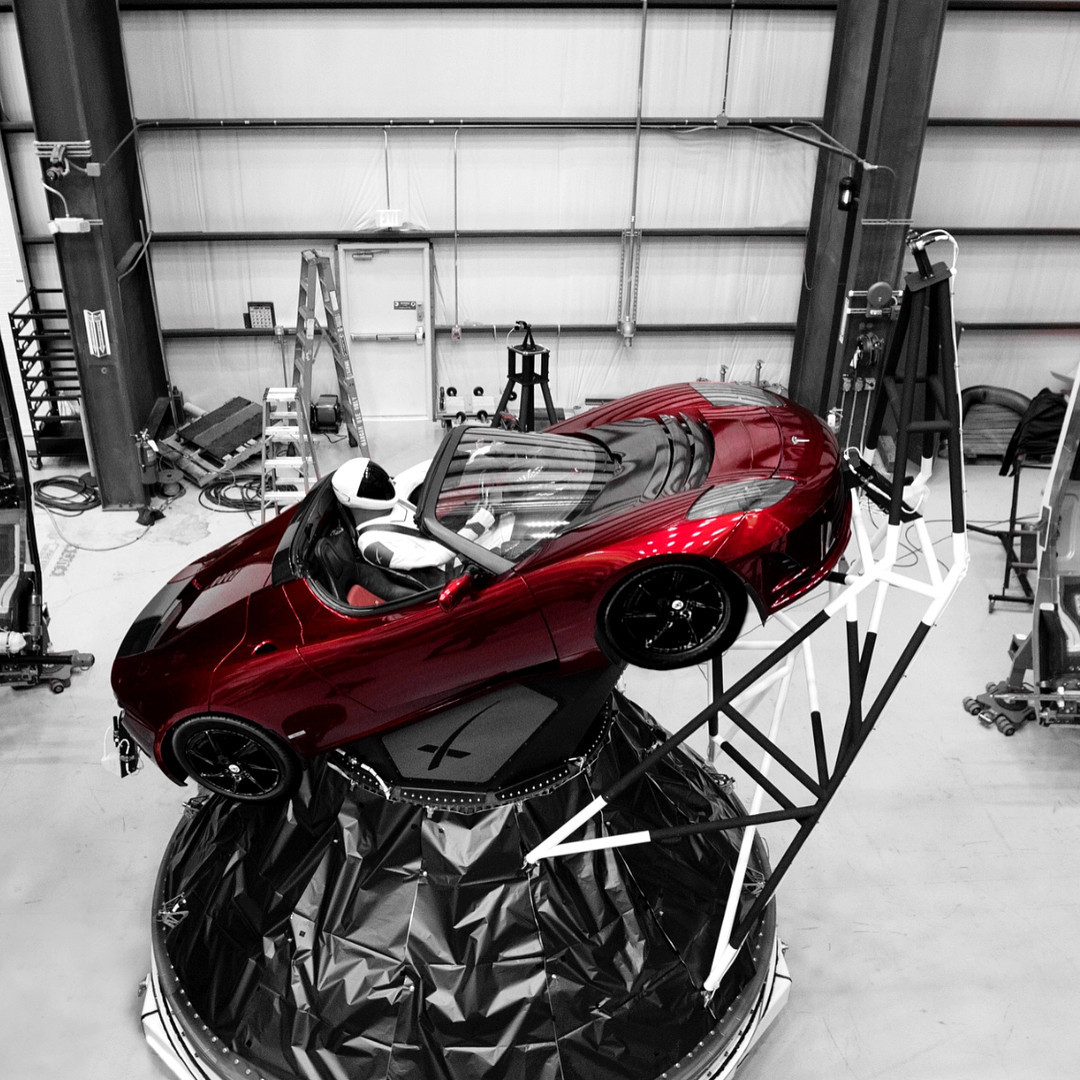 They also put their space suit in it, which you would think they would instrument to at least return some info, as a nice additional test.

However during the post launch press conference he said the suit is not instrumented at all. It is just as easy to test in a vacuum chamber, so they did not bother.

That is clearly a selfie camera on the front end and left side. There is something on the tail end. But still no solar panels, but since they hid this for a while, anything is possible.

Of course the Roadster's 60 Kwh battery pack would likely have more power the the second stages, but using it would probably cost more than it is worth.

Also, since this is Musk's Roadster, I assume he got the re-built battery pack upgrade to make it an R80 model (80 Kwh pack) that requires rebuilding an existing pack with new cells. A process that Tesla is doing very slowly, and thus I suspect they might have actually taken the pack out, or else swapped it back for a normal pack, to make upgrading someone else's Roadster faster.

They only built 2500 Roadsters in total, and not everyone is willing to pay for the pack upgrade, so buying machinery to automate is barely worth it.

I agree of course with @geoffc's answer that the batteries would be running out in hours or days, especially if they are running heaters to keep the battery itself and the other electronics warm (not unlike what a Tesla battery does for itself in cold weather).

At first I was thinking that the electronics could shut down except for a few micro-ampere draw for a Real Time Clock (RTC) that could "wake up" (reboot) a small computer and beacon system later, but then remembered that deep space spacecraft design includes plenty of equipment to keep the critical electronics (and batteries) warm enough. This necessarily includes a power source; either a Radioisotope Thermal Generator (RTG} or solar panels.

See for example the excellent answers to WHY did Rosetta have to go into hibernation for 2.5 years? as well as Is this the longest that a spacecraft “went to sleep” and then woke up on schedule?

Voyager 1 and Voyager 2 are currently at about 141 and 116 AU from the Earth. According to this answer and references therin, the Voyagers' high gain antennas are 3.7 meters in diameter and have an X-band gain of about 48 dB. At a distance of 1.5 AU you'd need an estimated 40 dB less gain for a similar performance in each direction (not taking into account sources of noise), so a relatively compact, even mildly directional antenna with a gain of 8 dB might be good enough for a very modest beacon or transponder for delay-doppler ranging. You'd still need to point it in the general direction of Earth though, and at this small distance pointing only at the general direction of the Sun (which the Voyagers can now get away with, see for example the as-yet insufficiently answered How well can Voyager 1 separate Earth signals from Solar noise these days?) would not be sufficient. So you'd need some functioning ADCS and/or pointing mechanism.

And of course you'd need to book time on the Deep Space Network's large dish antennas (or other deep space monitoring station of which there are several, see for example How have/how will Indian ground stations be used for comms or tracking of deep space spacecraft? and Was the time of Schiaparelli's landing chosen specifically so the Giant Meter Wave Radiotelescope could listen?) to do that at the greatest distances as the months wore on.

This kind of deep-space equipment (power source, heater, transponder or transmitter) sounds way too involved to build, test, and incorporate into this particular "stunt."

There is a possibility of using some kind of optical signal, such as LEDs and a coarse reflector which would need minimal pointing that might transmit a steady "heart-beat" signal that could be pulled out of the noise using a large telescope and Fourier analysis (similarly to how the faintest pulsars are detected in radioastronomy), or a more complex system as described in the answers to How is long-distance optical communications coming along in space?, but again, so much time to build, test and incorporate. You couldn't just flash the Tesla's headlights unfortunately.

As an aside, passive detection of very distant objects by non-optical methods is nicely summarized in this excellently researched answer to "What is the current record for the farthest detection of a “dead” spacecraft?"

Not the answer you're looking for? Browse other questions tagged launch spacex communication falcon-heavy or ask your own question.

1
What data is coming back from Space-X's Starman and his ride?
1
Why would SpaceX limit Starman’s Tesla signal transmission to 12 hours and not use solar power?
24
How well can Voyager 1 separate Earth signals from Solar noise these days?
15
WHY did Rosetta have to go into hibernation for 2.5 years?
20
If Starman is heading to Mars, why is he still spinning so we see the earth?
17
JWST observing cherry red Tesla roadster
13
How to calculate data rate of Voyager 1?
8
What is the current record for the farthest detection of a "dead" spacecraft?
9
Is this the longest that a spacecraft "went to sleep" and then woke up on schedule?
6
How is long-distance optical communications coming along in space?
See more linked questions

18
Has any payload been as silly, as the Falcon Heavy's Tesla Roadster?
43
Why is the first launch of Falcon Heavy sending a car instead of something useful?
20
How long will it take Elon Musk's roadster to become the fastest ever car?
1
How long will the Tesla Roadster's heliocentric orbit last?
6
How long will we be getting data (pictures?) from Starman and his Tesla?
6
Frequency and modulation mode(s) for the SpaceX Tesla roadster mass in space
15
Is SpaceX doing any science with the Roadster and/or spacesuit?
29
Could the Lunar X-Prize have been won by the Tesla Roadster that was the Falcon Heavy test payload?
4
What is the closest distance SpaceX's Tesla Roadster (Starman) will ever be to Mars?
3
How and/or why did Elon Musk mistweet Roadster's C3 so badly?