How did astronaut Ellison Onizuka's words end up in my passport?

Astronaut Jack Fischer's Tweet about the late Ellison Onizuka (lost in the shuttle Challenger disaster) mentions that Onizuka is quoted in US passports. I looked, and sure enough it's there, right across from an image of a Voyager spacecraft.

"Every generation has the obligation to free men's minds for a look at new worlds... to look out from a higher plateau than the last generation."

Who were the people or organizations responsible for proposing this and making it happen? 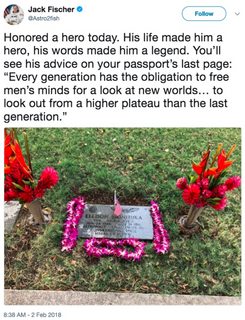 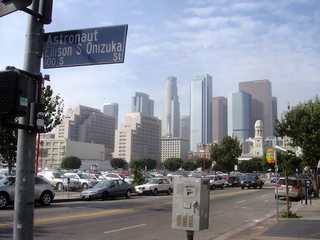 In 2007 the US Passport was redesigned with the new branding of an "E-Passport". These E-Passports were the first to contain RFID chips which contained bio-metric information intended to make passport forgery more difficult, and verification of the holder against the passport more rapid.

The State Department took a lot of flak for the redesign, but the original goals were to be fully inclusive, and Hawaii was prominent to play up the patriotic theme of "sea to shining sea" The obvious ulterior motive was to make the passport harder to copy, nearly every page had a different full color background.

How did they select the quotes? Hard to say. the closest I got to a reference on how it was designed was a quote from the NYTimes

The new passport was developed by a six-member committee from the State Department and the Government Printing Office, with then-Secretary of State Colin Powell approving the final icon theme. Others themes considered included American documents, the Wright brothers and space exploration. (The latter called for black pages, deemed rather impractical for reading visas.)

As with most things designed by committee, suggestions that seem impractical when one person thinks of them seem more realistic when a group of people think of them. It is highly likely that the "sea to shining sea" motif led the committee to attempt to find a prominent patriotic Hawaiian to quote to go with the Hawaiian page, and what's more patriotic than a semi-martyred-for-Science Hawaiian astronaut?

What is clear is that the technical design process spanned years. The questions about a bio-metric passport started in 2002 and was finally deployed in 2007. At least one suggestion for artwork was thwarted when it was discovered that the printing process did not produce passports which held up well in high humidity. However, the details of the artwork were not discussed.

Not the answer you're looking for? Browse other questions tagged history astronauts or ask your own question.

18
How many astronauts never got to fly in space in their astronaut career?
10
How important is the size of an astronaut?
6
Did any astronaut take a Bible into space?
13
Why did Neil Armstrong alone, not NASA, end up coming up with the first words uttered on the moon?
2
How to become an astronaut?
1
To which ISS astronaut(s) did Trevor Noah speak?
2
When did an astronaut in space first see someone on a TV screen?
4
Where did the Wake Shield Facility end up?
4
Why did the Space Race end on the Moon?