Could Earth-lunar flybys be repeated consecutively without the use of propellant?

Ever since a recent orbital mechanics question, lunar flybys have been nagging me in the sense that there is obviously energy available in the system. I'm interested if you could get a repeatable process that is energy-positive and could be done at the same cost as an ordinary NASA mission. This requirement limits the possible approaches to a spacecraft trajectory, along with the familiar toolset.

There is precedent that deep space probes get gravity assists from the Moon. Accumulated over time, these are demonstrated to be useful for helping to get probes out of Earth's gravity well. However, that's a 1-way process, so it has no obligation to preserve angular momentum, and it's non-trivial whether it could be tailored to make a repeatable orbit or not.

Lunar flybys are certainly tunable to some degree - in that you can hit a bullseye on Earth after the flyby. You could graze LEO instead, and you're off into another elliptical orbit. The problem is that the Moon has left you behind in that time, and you won't come close to it at next apogee.

But the system is rife with orbital energy! More than likely, the lunar flyby itself gave the probe kinetic energy. With extra juice to spend, why not spend some of that in an aero-brake with Earth, allowing you to tune your orbital parameters for the next pass? Something like: 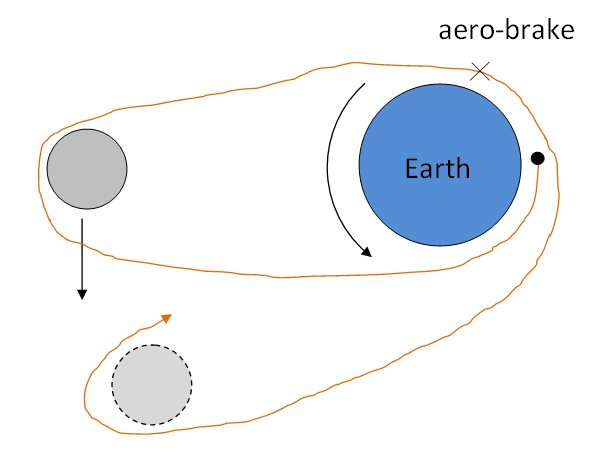 Now, I'm asking this question because there's something obviously ill-conceived about the above scheme. I definitely can't get the energetic arguments to work. Notice that I used East-West (retrograde) orbits above. That's because angular momentum arguments seem to rule out West-East orbits. The tidal evolution of the Earth-Moon system is that Earth's rotational energy is transferred to the Moon, so if this scheme is energy-positive, I expect it to slow down Earth's rotation (marginal amounts).

My arguments in favor of the scheme are so-far highly suspicious. While the Earth's rotation contains energy, it seems unlikely that skimming it at 11 km/s could ever possibly extract energy from that rotation. From the probe's perspective, the Earth could probably be taken to not be rotating at all. That logic ties me in knots, because it suggests that energy could be extracted from the Moon by slowing it down, which we know to be totally wrong. Energy can only be extracted from the Moon by speeding it up. Something is obviously wrong with that simplification.

Of course "simple" aerobraking won't work. That would only lower apogee, which isn't what we want. However, if NASA outfits it with some purpose-built movable flaps, it could do something like "feathering" to do controlled aerobraking before perigee, affecting the other orbital parameters. You could even possibly use lift during the pass to "aim" for the Moon's new position.

But all of those arguments are useless, unless the energy and momentum transfer can be clearly articulated. If possible, it could be proven beyond a doubt in an orbital simulator. If not possible, I expect that orbital physics arguments could falsify it.

To add more detail, I'm asking if a system is possible that uses:

That last point is the killer here. If you could get around that, you could do this with something the size of a cubesat. But that might also kill the entire idea.

What you are referring to is a Free Return Trajectory. It references a paper called Trajectories in the Earth-Moon Space with Symmetrical Free Return Properties, which states that the right path can lead to flying between the Earth and Moon with no further fuel required. But you won't gain any momentum from that.

I don't know if there was propellant used in between, but I know of at least one mission that had a spacecraft use two lunar assists: STEREO.

If you look at the first video on their web page explaining the orbits, you'll see that B (STEREO-Behind) gets a second gravity assist from the moon.

(Disclaimer: I work for the STEREO Science Center)

Yes, that sort of orbit is possible. It is a closed transfer orbit. It is noted in the Wikipedia article about a Cycler, a potential ferry spacecraft using that sort of orbit, that would pass close to two celestial bodies at regular intervals.

Not the answer you're looking for? Browse other questions tagged the-moon propulsion orbital-maneuver energy aerobraking or ask your own question.

17
How to calculate Delta V for lunar flyby
13
What is feathering?
10
How are retrograde orbits attained?
10
Can we get energy from the motion of orbiting bodies?
3
Gravitational assists from bodies other than planets
7
With current or near-future Cubesat propulsion technology, largest aphelion achievable?
3
How would 2 spacecraft be launched to be in sync in opposite directions?
0
Does the arrow in this STEREO trajectory animation point heliocentric prograde, or towards the Sun?

12
What does the BackFlip lunar cycler do in its pass by Earth?
8
Gravity Assist - Orbiting Satellites & Speed Increases
7
Is a manned craft powered by Solar Sail feasible from Earth Orbit to Lunar Orbit
7
Magnetic / Inductive braking against planetary magnetic fields?
29
How deep could a lunar mine go?
5
Could the helical engine work?
1
Could a horseshoe magnet help a satellite stay in orbit?
1
Energy to "nudge" a planet to a smaller orbit