Was the side booster footage from the same camera during the Falcon Heavy test flight stream?

Chat has once again led me to ask a question.

Geoffc suggest that the "two bottom feeds were from the same camera" as they aimed at the same landing site. I then started to collect some images to see if they were indeed identical (listed below):

Image 1: Booster footage showing the ignition of the other side booster with identical orientation.

Now I'm of the opinion that the same identical camera was used, this is especially clear at the end, when both cameras are shown aiming for LZ-2. But was this the case throughout the flight? Or did something go wrong shortly before landing requiring them to resort to using the same footage twice.

The feeds were identical throughout the flight. It was definitely recorded from the same booster. At booster separation you can clearly see the shoreline. If it was the camera view from the other booster the background would be rotated by 180°, which it wasn't:

Also the RCS puffs happened at the exact same time, which is highly unlikely as the boosters have to make their own individual corrections:

Note that the frames (timing) and viewport are not identical, but this is most likely a side-effect of rendering them into one video.

Update: SpaceX has uploaded an edited version of the video, now correctly showing the feeds from both boosters:

SpaceX has updated their launch video with the proper views.

It was definitely the same camera - its most obvious when they land. You can see the other landing platform (for the other booster) in the same place in both feeds.

At least the last part of the video frames for the two side boosters were both definitely from the same camera. I support the arguments above. The landing itself (a single video of both pads) looks genuine and awesome to me.

I watched this on an iPad and did a cross eyed stereo superimposition of the booster windows from just before separation all the way to ground, they are identical. Stereo "lock" was never lost and they clearly both landed on the same pad. Great launch and landing.

Originally, yes. It was edited at some point. The problem with that is that no where does it notate the edit. A simple camera feed mistake could easily have been fixed and the edit noted. That Google allowed an exception to their usual policy due to the extraordinary nature of the live feed would have been justified and understandable. That it was done without acknowledging the edit calls the credibility of both Spacex and Google into question. JMHO

The booster footage was the same. What probably happened was they were not getting a good signal from one of the boosters (the bottom right video) during the live stream of the landing, and so they doubled one video. What I don't understand is why they made it slightly out of synch so it would look like two feeds. I have a copy of the original footage, and updated footage they posted later, and it looks like they inserted the proper video footage in it's place. Here is a picture of both booster landing videos just before landing: 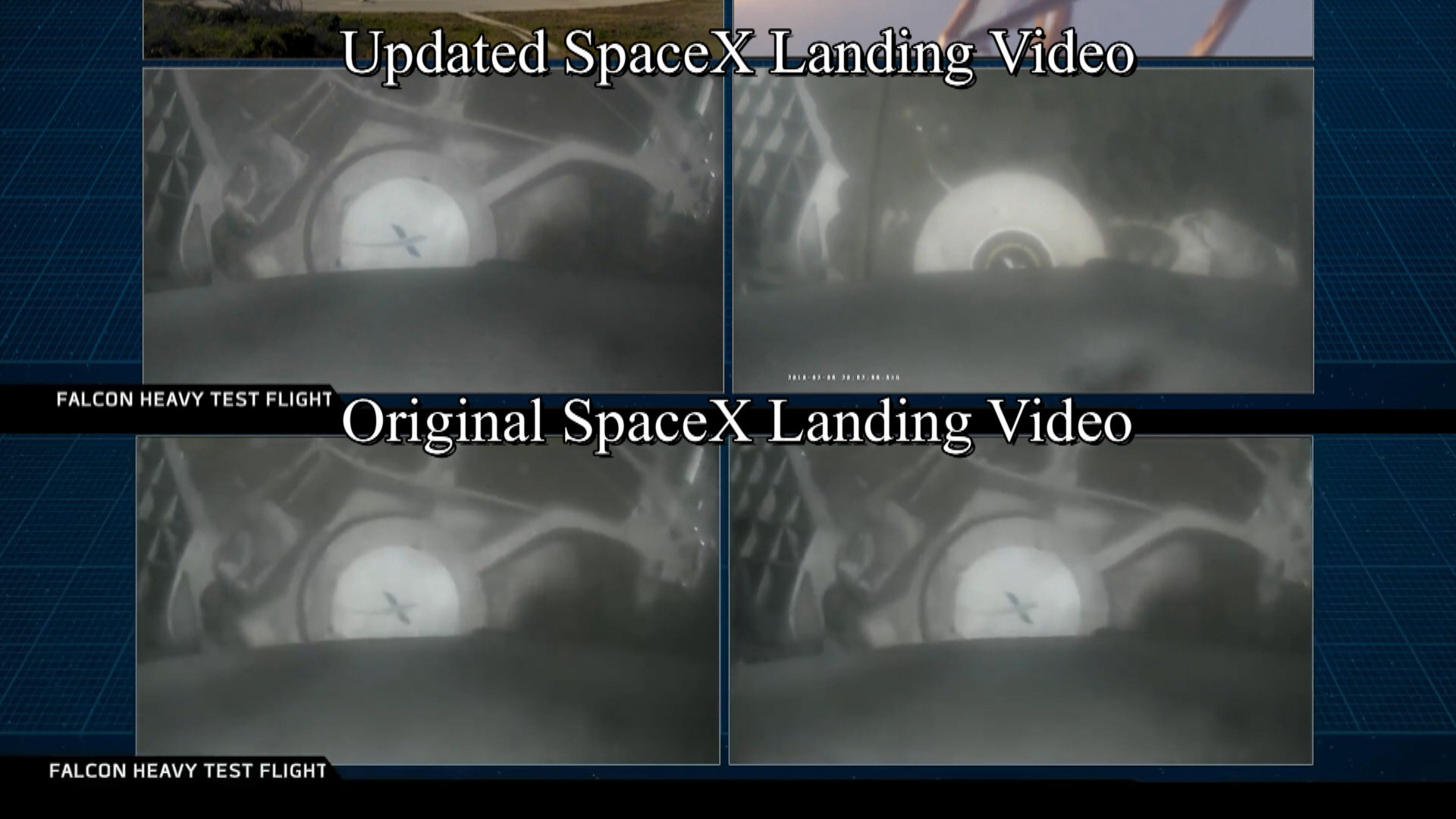 This question has been clearly answered - the live video feed was definitely from just one booster, and I wish SpaceX would just be open about it. I'm sure it was a simple mistake in real-time, but the poor cover-up sucks.
And while we're at it... it was obvious watching the live event that the center booster crashed. The two commentators got the news in their ears, and struggled to not let on what happened. And later everyone noticeably didn't mention the status. The live video showed the camera lens instantly washed over with water/etc that obstructed the view, but the feed was still live, showing the empty landing pad, with no booster. I knew right then that it crashed, and I'm sure you all did too.

BryanBryan
1
$\endgroup$
1
Add a comment  |
Highly active question. Earn 10 reputation (not counting the association bonus) in order to answer this question. The reputation requirement helps protect this question from spam and non-answer activity.

Not the answer you're looking for? Browse other questions tagged spacex falcon-heavy camera or ask your own question.

12
What is it that SpaceX is editing out of their videos after posting them on YouTube?