What did the Falcon Heavy's Arch contain beside the Isaac Asimov’s Foundation novels?

It has been reported that the payload included an Arch disk that contained the Foundation novels by Isaac Asimov.

Surely it also contains more than that since the disk can store 360 terabytes.

What else did it contain?

The Arch Mission Foundation's Isaac Asimov Foundation trilogy library aboard the Falcon Heavy payload stores the printed data of the Foundation series and a key to decode the data: 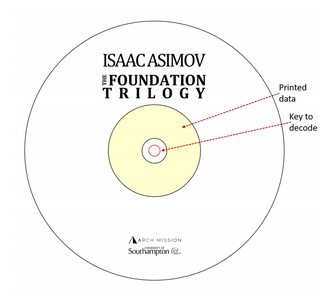 Also, the Arch Mission Foundation explains on their website that there are many different versions of the trilogy on the disk to help future discoverers to understand the information:

Making the data decodable means making it possible for a recipient to actually understand what the data means. This means they have to understand the file format, and any markup or metadata, and the content as well - and this means they have to map it to their own mental model of the world. If they are humans and speak something related to an existing human language - this is not hard to do. But if they are not humans, or have nothing in common with us, then it is not an easy task!

One solution is to include one or more primers that teach how to understand the data formats, languages, formats and other encodings, of the data. To this end, we are including many different kinds of primers created by others as well as primers that may be created by the Arch Mission Foundation. But we also believe that, at least in the case of technologically advanced recipients, data mining and machine learning may be one of the main techniques that will be used to decode the content of the Arch Libraries. With that in mind we are working on designing the Arch Libraries to be helpful to future dataminers and AI algorithms. For example, we are including many different versions and translations of the same texts, side by side, with a lot of redundancy and other related information nearby to facilitate finding and understanding the patterns and relationships among concepts.

The Foundation trilogy was chosen because it is emblematic for the Arch Mission Foundation:

Asimov’s Foundation Series was the inspiration for the Arch Mission Foundation, many years ago when we first conceived of this project. It is a metaphor for what we hope this can become, and it is the perfect cornerstone as our mission begins.

For this, we would also like to thank Asimov’s agent, Mel Berger, at WME Entertainment, for giving us permission to send this epic trilogy, to space, as an homage to Asimov’s brilliance and vision.

If you are not familiar, Asimov’s Foundation Series is important for its symbolism. The series’ protagonist Hari Seldon endeavors to preserve and expand upon all human culture and knowledge through a 30,000 year period of turmoil. We felt this was a very fitting first payload to include in the Arch.

The Arch Mission Foundation explains that this disk is also a test:

The first Arch Library is being deployed by SpaceX into a Mars orbit around the Sun for at least millions of years. We call this The Solar Library. It’s a small test library, using a new way of storing data in quartz.

They go on to explain that 360 terabytes is the eventual capacity of the technology, so I am unsure what the current capacity is:

This new medium, invented over decades by Dr. Peter Kazansky, is expected within 10 years to achieve a storage capacity of 360 Terabytes per 3.75 inch disk of quartz (that’s 7000 Blu-Ray Disks!)