No need for gravity assist with Falcon Heavy?

Elon Musk is quoted to have said, after the launch of Falcon Heavy, that «it can launch things direct to Pluto or beyond, no stop needed, don’t even need gravity assist or anything». Now, I am not an expert in orbital computation, but this claim seems highly dubious. New horizon took 9 years to reach Pluto. How long would it take for a spacecraft launch by Falcon Heavy without using any gravity assist?

As to how quickly could Falcon Heavy have done that without the gravity assist? The exact numbers are pretty difficult to guess. SpaceX no longer publishes their performance charts like they used to. From NASA's performance estimator, I have the following charts. Note that the performance numbers are suspect, will update them when I have better. 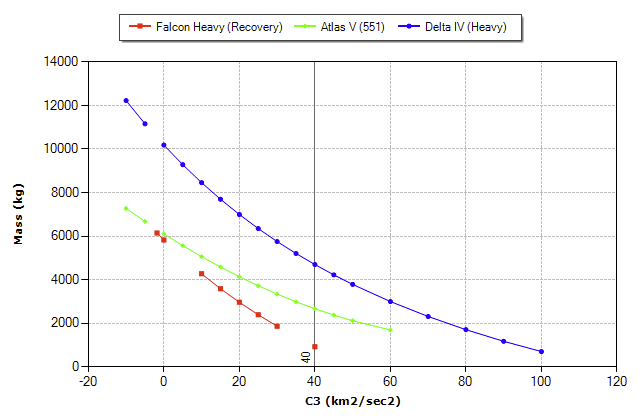 This indicates that while a direct to Pluto mission is possible, it would not have the high energy required. Even with the expendable version, it still doesn't perform as well. 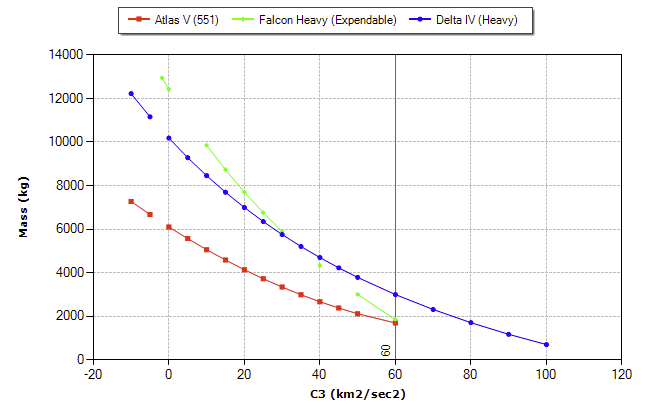 Bottom line is, the lack of a high ISP upper stage really limits the functionality of the Falcon Heavy in carrying cargo beyond Earth orbit. The mission could be done, but it would take longer then with an Atlas V 551 mission, as New Horizons used. For a fully expendable mission, the crossover point between Falcon Heavy and Atlas V 551 seems to be about $60 km^2/s^2$. That won't quite get you to Jupiter. It turns out the two are pretty equivalent in price.

Not the answer you're looking for? Browse other questions tagged spacex orbital-mechanics falcon-heavy or ask your own question.

17
How much longer would New Horizons take to reach Pluto without the Jupiter slingshot?
17
Why can't Falcon Heavy accelerate deep space payloads as fast as Atlas V and Delta Heavy?
9
How much payload can Falcon Heavy Reusable lift?
5
Was there any launch vehicle possible that could have been used for a heavier New Horizons with enough fuel to enter Pluto orbit? (adding ~10 years)
1
What single figure best compares the mass launch capacities of different rockets?

2
Falcon Heavy first stage abilities
6
Ballpark comparison of a hypothetical Falcon 'Quad' Heavy with cross feeds
6
What are the most difficult challenges SpaceX will face getting astronauts to Mars by about 2025?
4
Is a Falcon Semi-Heavy plausible?
27
How can Elon Musk's Tesla actually reach Mars orbit?
7
Why won't Falcon Heavy launch with 100% thrust?
17
Why can't Falcon Heavy accelerate deep space payloads as fast as Atlas V and Delta Heavy?
14
Why does Arabsat 6A need a Falcon Heavy to launch