Was SpaceX's venture into the asteroid belt a “convenient accident” on purpose?

There is gold in the asteroids, or iridium.

Musk just proved that his Falcon heavy can send mining robots to the asteroid belt.

Question:
Is there any indication that this was intentional and not accidental?

It is highly likely it was known that the upper stage would could be overshot into the asteroid belt, but it may be within the upper-bounds of expectations.

The reason for this is that Elon commented in the Falcon Heavy post-launch press conference that the propellant left in the upper stage was "within 0.3% of expected values". This means they knew how much propellant they expected to carry into to orbit — and of course, they run a multitude of simulations on the ground first, prior to launch. So yes, addressing the question in your title, it was likely a very purposeful convenient accident.

That being said, the latter parts of your question are unanswerable. Mainly because we don't have any form of autonomous mining technology that can fit in the payload mass of a light car; so your later statements in your question body do not follow from the question in your title.

Musk's prior comments on asteroid mining and resource utilisation indicate he sees it as something of a questionable utility (admittedly, these comments were made in 2013).

I've used the plotting of the Horizons projection described in this answer to show the distance between the Roadster and Mars out to 2030. The projection is likely to be slightly revised as future optical detections described here come in. There is also more to read in this answer.

Normally you would have a launch window scheduled at a certain time of year for a planetary mission, but in this case that wasn't possible. So instead, with the launch date fixed by other constraints, the period of the orbit needed to be tuned (via the apoapsis among other things) so that the flyby would occur in the near future.

I'm proposing that this orbit is not an accident, but that some careful calculations were done and (some of) the 3rd and final burn parameters were tweaked in order to produce a near approach to Mars in within the next few years. It could be just an accident/coincidence, but as they say, space is big...

note: The current projected orbit has a period of about 558 days. 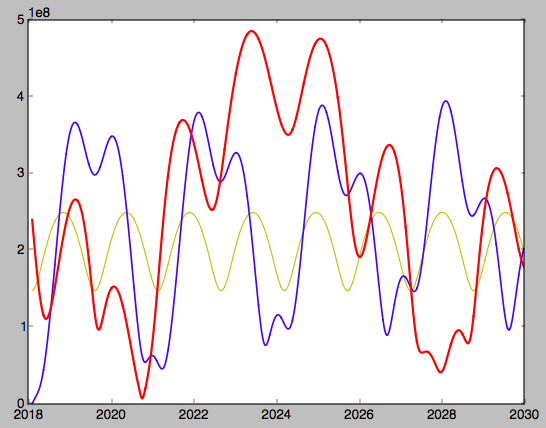 There is no way to power any 'prospecting equipment'. The batteries on the stage are dead already, and there are no solar panels on board. Also, no equipment is visible in the prelaunch photos.

The batteries on the stage were made to power the stage for the ~6 hours it needs to work. The stage has to be standard for the flight to be valuable as a qualification flight.

Solar panel size depends on how much power you need, which depends on the instrument package. Mars Reconnaisance Orbiter has 9.5 m2 of panels, which produce 1000 W of power in Mars orbit.

Not the answer you're looking for? Browse other questions tagged spacex mining asteroid-belt or ask your own question.

30
Is it possible to track an object as small as the Tesla Roadster around the Solar System
23
Starman/Roadster in a=1.795 AU orbit, now what's the method to this madness?
3
Did SpaceX intend to overshoot Mars?
5
ISS battery “de-orbit” burnup?