How did the Apollo astronauts train for the 1/6G lunar landing?

It goes without saying that training/conditioning one's reflexes for a situation is highly relevant to some professions. Pilots train in a computer simulator.

During the Apollo missions computers were not as ubiquitous as they now are. The CSM could be, and was checked-out in Earth orbit.

The Lunar Model (LM) however was meant for a non-Earth environment; one which could probably not be simulated - yet it would have been necessary to give the astronauts a 'feel' of the craft in reduced gravity.

The mission commander for the Apollo-11 apparently did such a great job with his manual landing the shock-absorbers failed to depress. This may be merely an urban legend ... but it does draw one's attention to the question -

How did the Apollo astronauts train to land the LM in the 1/6th Lunar Gravity?

They used the Lunar Landing Training Vehicle, as pictured below. This had a jet engine to provide 5/6 of the lift needed to hover the vehicle, plus rocket engines that simulated the LM's engines.
With the jet running, the LLTV felt like it weighed 1/6 of its actual weight, so it came pretty close to simulating moon gravity. 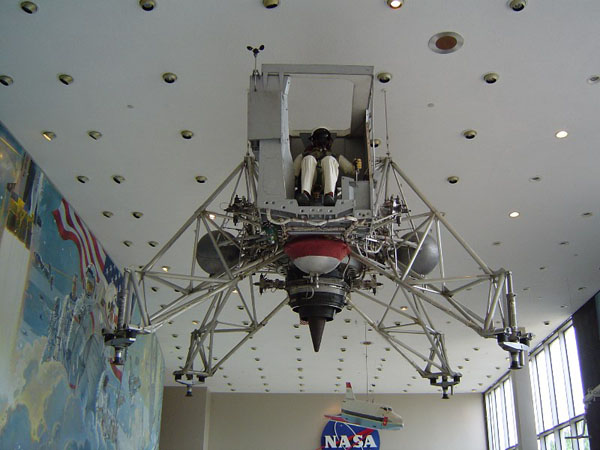 Not the answer you're looking for? Browse other questions tagged apollo-program gravity lunar-landing training or ask your own question.

15
How is lower/no gravity simulated on a planet with gravity, without leaving the surface?