How did the communication work between the SpaceX Tesla and Earth?

With a Tesla launched in space and HD cameras put on it, I can imagine its not easy to receive a signal from that slowly spinning, multiple ten-thousand km away new artificial object in our solar system.

So how is it done? How did they ensure to receive the HD signal from the Tesla thousands of miles away while slowly rotating (for these 4 hours)?

The HD video stream and transmitters were only designed for the first few hundred kilometers. What you can see now is re-runs of the first streams. The Falcon-Heavy is now too far away to have any large bandwidth application, such as video, reliably transmitting back to earth.

Although the table 4.6 in the Falcon-9 User Guide shows the frequencies and channels of the transponders/transceivers/receivers on board. 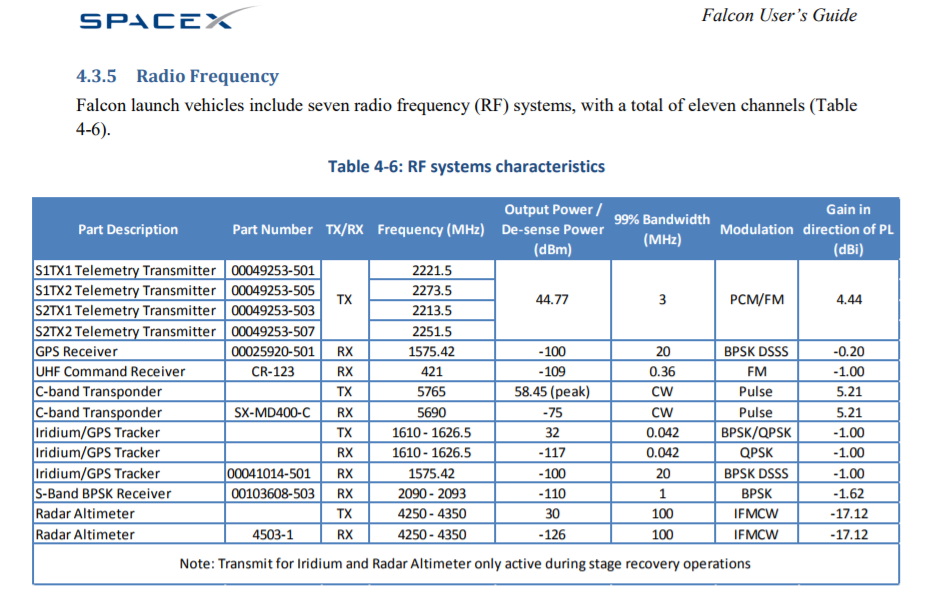 The guide does lists "Falcon launch vehicles" without further specification of model, it is unsure, and I have not been able to confirm this, if the Falcon-Heavy frequencies/transponders are the same.

It is likely to be assumed that the transponders on the Falcon-Heavy are at least similar.

With this information it can be concluded that current telecommunications are done by telemetry (PCM/FM encoding/modulation) mainly for down-stream applications.

It is further clear that he up-stream commands are likely to be done by the C-band transponder, using CW (Continues Wave) Pulse modulation, and the UHF command receiver which uses FM modulation.

Without publicly available protocol specifications, there not much else to be distilled from this document.

The transmitted signals in the 2.2GHz and 5.7GHz bands, while a decent output power at source, will be greatly attenuated before they reach earth. Special Receivers and Antenna's will be needed to receive them from such a great distance in space. I am not fully sure about the current speed or speed acceleration of the Falcon-Heavy, but we are now 2 days in and at 10km/s it is pretty far away. Too far to capture any data with consumer grade equipment.

Any transponders from the Roadster, although I cannot find any reference nor details of such, are in the same situation as described. At some point the roadster will be too far away to reliably transmit a quality signal back to earth. 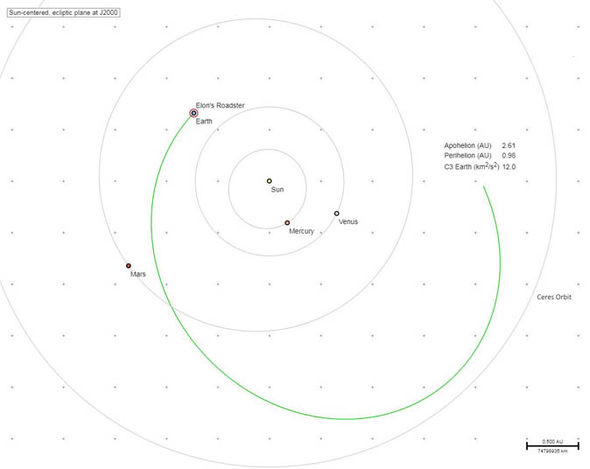 Without specifications we can only apply some theory to the transmissions of the Tesla.

The general formula for path loss:

For HD quality video you need 4 MHz bandwidth or higher, which will bring the transmitting frequency into the GHz to reliably encode/modulate this. Furthermore you need to know the power output of the transmitter and the noise-floor // SINAD of the receiver.

The following is just an example calculation, as details of such are not actually available, suppose the following:

And with that, lets assume a 3000 km distance, we can now plug this into the formula:

So now we have:

This would mean that with a very simple 0 dBi gain antenna on the transmitter side, and all other theorectically sample values, it would be possible to transmit a reliable signal.

The practice is that there are much more to be taken into account and the values here presented may not be representing anything near the actual design of the transmitters on board of the Roadster.

Is there a simple antenna mounted on the Tesla strong enough to achieve the transmission over the large distance (for the first 4 hours)?

probably/yes, practically there are probably more than one antenna to overcome limitations of directivity and rotation of the object.

But it is more than just reliably sending and receiving the signal. The biggest hurdle you may have is with the encoding, and ensure your protocol actually allows for such distances with, undoubtedly needed, error correction built in. At HD video rates, there are lots of bits (pun intended) which can go wrong. Long distance comms and telemetry would normally choose a much smaller bandwidth, and a more sensible protocol such as PCM, PSK, (Q)BPSK, and similar.

Here are the details of the payload transmitters, these were the two channels used from the Tesla for transmitting the video. Those in the table above are purely the launch vehicle.

Given that the TX power is 20 watts and the actual EIRP is about 1/2 you would assume that the TX is split with a 3dB splitter, and then fed to a pair of zero'ish gain antennas, most likely to be patches or similar. Its probable that the two transmitters fed the same video and their signals paths were separate for DR purposes. The antennas were probably QFH or patch types which would both have very wide beamwidths and in pairs would not have nulls. This is all speculation - I had a good look for photos of the payload fully integrated, you can easily see the scaffolding supporting the cameras but the S-Band antennas were not obvious.

Not the answer you're looking for? Browse other questions tagged spacex communication tesla-roadster or ask your own question.