Using JPL's Horizons API I can look at the orbital elements for the EM Barycenter wrt the Solar System Barycenter at J2000. The output looks like this: 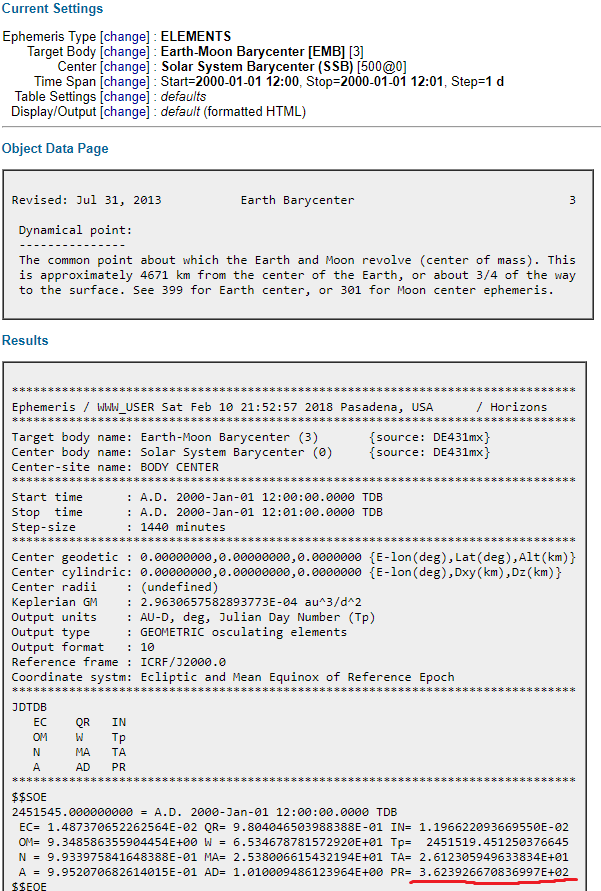 EDIT: Mercury's page (below) is even more confusing. Even though the system is supposed to be simpler (no satellites), the same page shows 87.969257 days for the sidereal period on the Geophysical Data section, and 90.0761 days for it on the Ephemeris section.

@DavidHammen's answer is of course spot-on correct, but I understand why you would have thought that this might be the right period. It is true that the Earth-Moon barycenter might move along a more representative Keplerian orbit than either the Moon or Earth alone, and if they were similar mass, this would be fairly obvious if you plotted their orbits; each would "wiggle" around the barycenter's smoother orbit.

Actually, if you had chosen the Sun instead of the Solar System Barycenter, that would have been slightly better conceptually, since the Earth and Sun tend to be pushed around by Jupiter (and others) roughly together, but that's not an exact statement.

But the problem is that you have taken a "snapshot" of the *osculating orbital elements" and those are not the mean or average elements. They are the elements of a totally fictitious, instantaneous fit of a hypothetical elliptical orbit around whatever point you choose. You could choose Jupiter as the center, and you'd get a hypothetical, but totally unphysical orbit around Jupiter that happened to be tangent to the real orbit at that instantaneous moment in time. Of course since it's wrong, you'd get totally different parameters the next day.

The big take-home message is that real orbits are just not Keplerian orbits to begin with, because all bodies are affected gravitationally by all other bodies. It's convenient to approximate orbits as Keplerian, but always remember that while these are close, they are wrong!

See the plot here or see the answers to Why does the eccentricity of Venus's (and other) orbits as reported by Horizons vary based on the frame origin and basis?

I've downloaded all three for one year, then plotted using the Python script below. In the first plot, the Earth and Earth-Moon Barycenter appear nearly on top of each other, but not quite. It's just that the separation is 81 times smaller than it is for the Moon: 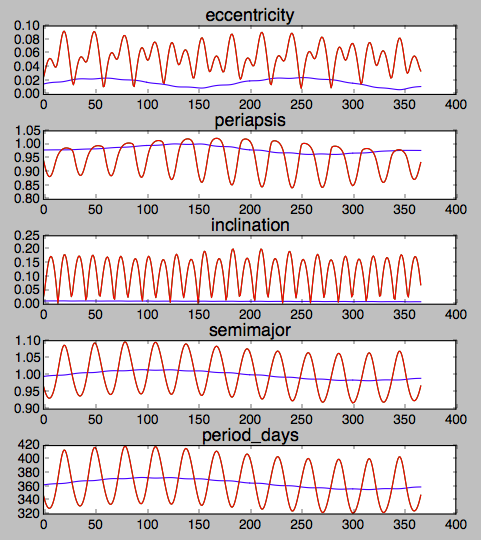 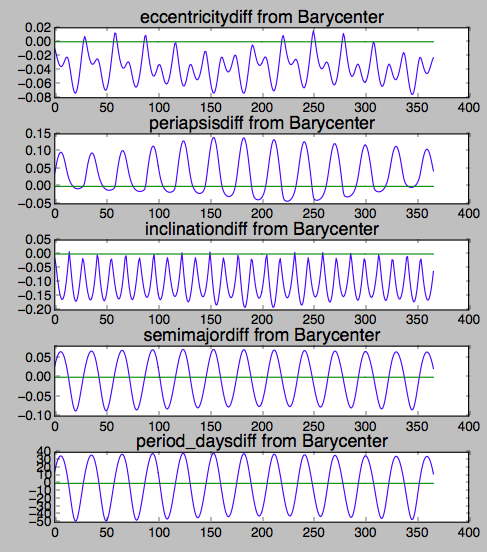 You are doing three things wrong:

TL;DR: Garbage in, garbage out.

4
Why does the eccentricity of Venus's (and other) orbits as reported by Horizons vary based on the frame origin and basis?
4
Compatibility of osculating elements and cartesian vectors given by JPL Horizons?
1
How to find instantaneous mass of a central body that results in a given osculating orbit?

5
Why does NASA Horizons say that Earth inclination is not 0 at J2000 epoch?
9
Why do the LRO's orbital elements appear to constantly oscillate - except recently?
5
J2 long-period perturbations in the inclination
4
Why does the eccentricity of Venus's (and other) orbits as reported by Horizons vary based on the frame origin and basis?
3
Different results for Orbital Period?
3
How to plot this orbit?
4
Launch azimuth from orbital inclination WRT rotating earth?
2
Determining the launch period for Hohmann transfer