The Falcon Heavy test flight included a demonstration of capability to coast for several hours and then re-light the second stage for a final burn. During the coast, the cryo propellants are absorbing heat and slowly boiling off. The pressure in the tanks would be managed by venting. My question is: venting what? Only gas (ideally), or a potential mixture of gas and liquid? If gas only, how would that be accomplished in zero gravity? In other words, how would the liquid phase be conserved and only "boiled" gas released? 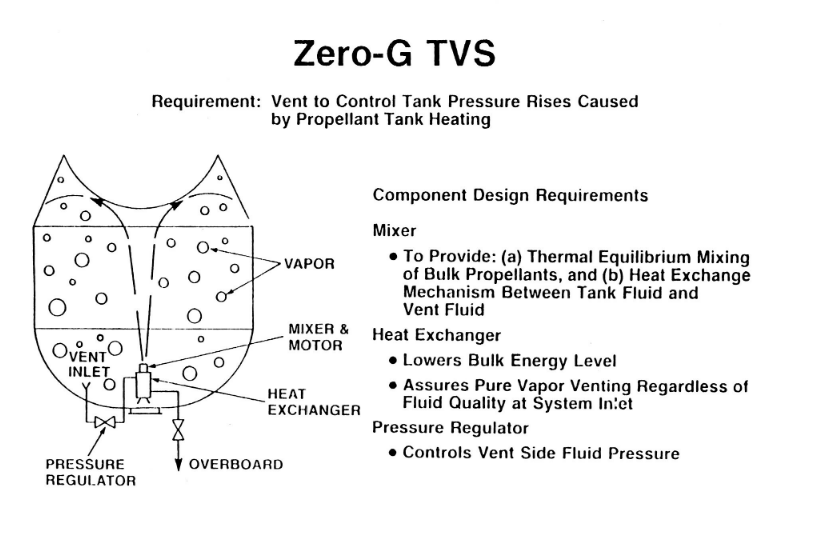 This device served to keep the bulk propellant well mixed, and ensured that only gas was vented.

Theoretically - A small ullage thrust could be applied before opening gaseous vents on the opposite end from where the propellant settles.

In practice I'm not sure this is even necessary, the quantities should be fairly trivial.

Not the answer you're looking for? Browse other questions tagged falcon-heavy cryogenics or ask your own question.

31
What are the droplets/particles falling off rockets at launch?
8
Autogenous pressurization with sub-cooled propellant
9
Has solidifying liquid propellant been considered for space exploration?
14
Was anything else about the Falcon Heavy test launch “off nominal” besides the center core return?
2
ULA's plan for LH2/LOX 2nd stage that can maintain propellant for an extended period of time?
9
Why do Ariane rockets not have ice break off on liftoff?
6
How will Robotic Refueling Mission-3's liquid methane tank remain full for six months without any boil off?
7
Why can’t cryogenic propellants be storable, at least on the ground, via refrigeration?
1
Could in situ (in-rocket) evaporative cooling/refrigeration be used for methane or hydrogen cryogenic propellants?
4
Why are propellant tanks filled from the bottom?