What was going to lift the components of Space Station Freedom?

For the Space Station Freedom (predecessor of ISS), what was the plan for lobbing the various components up into orbit? Was it going to be launched on a modified Saturn V like Skylab was, or were the components going to be designed to fit inside of the space shuttle, or would have something like the STS-C been used?

It was planned to be launched piecemeal by the Shuttle.

One of the first redesigns was to reduce the number of Shuttle missions required.

NASA tried to reduce the number of Shuttle assembly flights by making several modifications. The first launch would now take place in March 1994, the Station would be permanently manned from April 1995 onwards and be completed in March 1997 after 17 flights. Congress disliked the 6-9 month delay and briefly demanded that the schedule be accelerated.

You can see the influence of Freedom on what would become the ISS in this artist's concept. 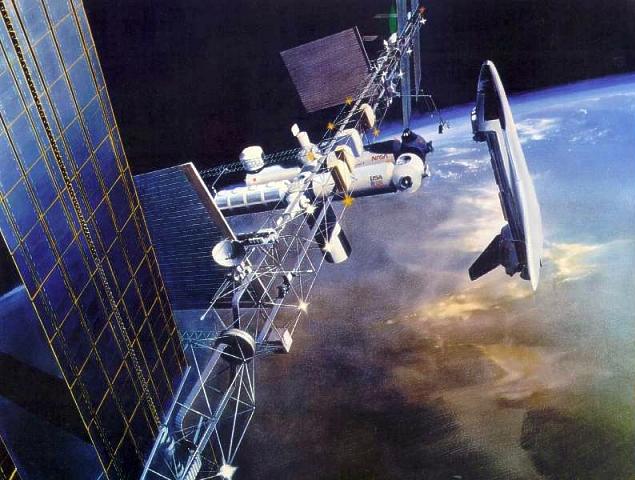 There were different concepts proposed, where a Shuttle-C, a cargo version of the Shuttle, would launch a large singular station. Shuttle-C was non-reusable and got way more payload compared to a regular Shuttle mission since the wings and cockpit are gone. Or put another way minimizing the non-cargo stuff, lets a Shuttle-C concept carry much more actual payload.

Otherwise it was a Shuttle launched station design.

Not the answer you're looking for? Browse other questions tagged history space-station construction or ask your own question.

17
What was the space-worthiness determination procedure for STS-1?
17
Could the space shuttle be permanently left in orbit as a space station?
10
Did Skylab have a fixed orientation?
6
When was the second production run of the Saturn V cancelled?
9
Building space stations with the original, smaller shuttle
2
Space station Freedom - purpose (specialisation) of pressurized modules
3
Is it possible to identify the main systems that would be present in a generalized space station?
27
What were the differences between the STS Orbiters?
34
What led NASA et al. to decide the ISS should be a zero-g station when the massive negative health and quality of life impacts of zero-g were known?
3
Use of Starship Fuel Tanks in a Space Station