What is the basic mechanics behind the way the orbits of the twelve Vela spacecraft evolved over decades?

After reading the question Where is Vela 1A? Is there any information what its orbit would be like now? and the answer there, it looks like they were deployed in roughly 5 day, 100,000 km circular orbits, which tended to grow quadratically/exponentially(?) in eccentricity over years, then later more slowly in inclination, and now have become quite scattered.

I've plotted all twelve of the Vela spacecraft below. They are called either Vela 1 though Vela 12, or Vela 1A through Vela 6B (launched in pairs).

While of course orbital mechanics is complicated and the effects of the Earth's shape as well as that of the Sun and Moon depend on the details of each orbit, are there any basic principles here that can be understood from this collective plot?

If not, I can make more complicated plots, but I don't want to get into that unless its necessary.

Yes, there are real multi-decade gaps in the TLE histories for these objects. That's what makes it more intriguing! 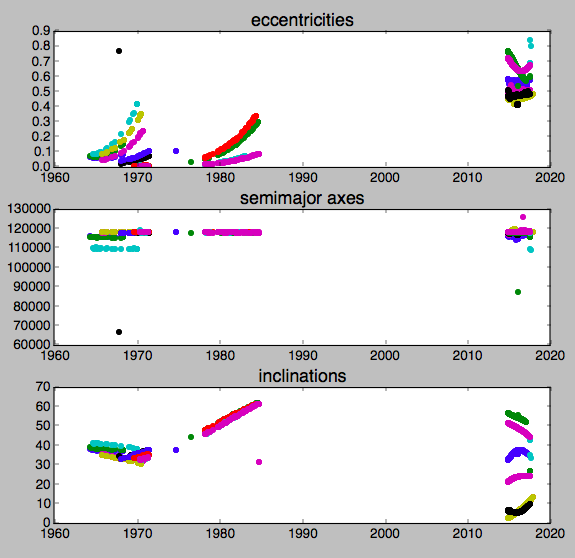 The main culprit is the Kozai mechanism.

Basically, with objects in orbits of this sort, you can swap from a highly inclined, nearly circular orbit to one that's more eccentric and less inclined. It's not quite that simple here, because the Velas are significantly perturbed by the sun, moon, and the earth's oblateness. But the overall effect is that swap of eccentricity and inclination. The orbital period/semimajor axis remains mostly unaffected (you can't just park yourself in a particular orbit and let perturbations pull you into a higher or lower orbit, sadly… that would be useful if you could do it.)

In re the TLE gaps: Space-Track's predecessors computed them for some years, but have mostly lost track of them. I work with the asteroid survey folks, and they've recovered several of them, which has resulted in my being able to compute TLEs for them again. (I compute orbits and TLEs for lots of high-flying junk, mostly so that the asteroid guys can ignore them. See https://www.projectpluto.com/pluto/mpecs/pseudo.htm for examples, including the Velas.)

By coincidence, the Catalina Sky Survey (one of the major asteroid surveys) just recovered one of the Velas on the day of your post (1964-040B = NORAD 00837 = Vela 2B). The story also has a link to a plot showing the perigee distance and inclination for this object, from right after launch to 2029. You can see that they proceed largely, though not entirely, in lockstep.

In extreme cases, this resonance can bring the perigee down into the atmosphere, as will happen next January for the Soviet magnetospheric research satellite 1977-093A.

It got forty good years, but in a few months... it's toast.

Not the answer you're looking for? Browse other questions tagged orbital-mechanics spacecraft high-earth-orbit or ask your own question.

15
When was the last time that Starman/Roadster was seen?
6
Where is Vela 1A? Is there any information what its orbit would be like now?
1
What Earth satellite remained in orbit the longest before reentering?

32
What is the total mass sent into orbit over all history?
110
What are the choices today for orbital mechanics simulation software?
13
What is the farthest a spacecraft has traveled away from earth?
7
Why does the Juno spacecraft flyby Earth on the way to Jupiter?
8
What is the procedure for naming spacecraft?
3
What is the angle between two orbits in the equatorial plane?
6
What is the difference between halo orbits and Lissajous orbits?
25
Assuming a spacecraft is traveling in a constant rate and our Astronaut will exit it to a space walk, will she be "left behind" by the spacecraft?
4
Do orbits change over a period of time, especially when the Star is not at the center (example: Didymos)?
37
Why do exploration spacecraft like Voyager 1 and 2 go through the asteroid belt, and not over or below it?