Why does the Mars Global Surveyor carry a bit of the Zagami meteorite?

The NASA News item A Piece of Mars is Going Home begins:

A piece of a meteorite called Sayh al Uhaymir 008 (SaU008) will be carried on board NASA's Mars 2020 rover mission, now being built at the agency's Jet Propulsion Laboratory in Pasadena, California. This chunk will serve as target practice for a high-precision laser on the rover's arm.

which is pretty cool. But what caught my attention is:

NASA's Mars Global Surveyor included a chunk of a meteorite known as Zagami. It's still floating around the Red Planet onboard the now-defunct orbiter.

Why was a piece of the Zagami meteorite (also Wikipedia as well as here and here in JSC's Mars Meteor Compendium) put on the Mars Global Surveyor? Is it also being used for "target practice?"

From the Wikipedia article I found the paper Zagami, Enriched Basaltic Shergottite, 18 kg but so far can't find which piece went (almost) back to Mars. 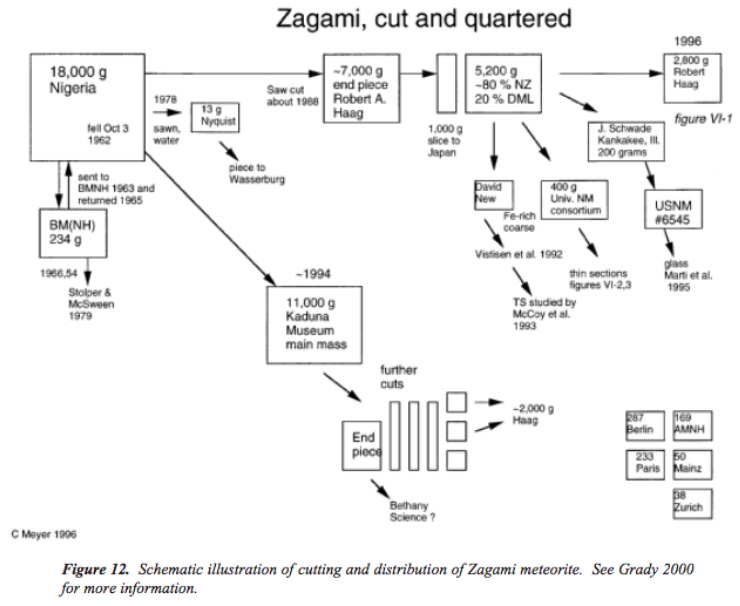 In case anyone doesn't know, and it's maybe not obvious from the question, this meteorite is believed to be a chunk of Mars that was knocked free by an impact a couple of million years ago.

The story seems to be clear here. The scientist had bought (with his own money) a chunk of the meteorite to test his instrument (which presumably be observing some of the same minerals that are in the meteorite). A very tiny fragment of that chunk (described as a sand grain) is attached to a plaque on the global surveyor "commemorate the accomplishments of space scientists and engineers.". So it doesn't appear to serve any practical or scientific purpose on the spacecraft.

Not the answer you're looking for? Browse other questions tagged mars geology or ask your own question.

3
Does Perseverance's SuperCam include a Martian meteorite? If so, why?

5
Could the Mars One rovers be used to carry personnel?
8
Is there a meteorite from Earth on Mars?
3
Will, or when will, Mars Global Surveyor decay from orbit?
8
What are the known historic global and regional dust storms on Mars?
20
Curiosity is still dirty! How will the ExoMARS Rover keep its solar panels dust-free and collecting sufficient power?
5
Why are the gaps in MRO global images of mars so irregular and sometimes filled in?
4
How does one get the exact location of imaged features on the surface of Mars?
5
Does Mars have badlands?
3
Does Perseverance's SuperCam include a Martian meteorite? If so, why?
8
Are quasicrystals common on the Moon and Mars?