What would be the effect of a non-periapsis and non-apoapsis prograde burn on the shape of an objects orbit?

Pretty new to orbital mechanics and this question has been bugging me. How would the shape of the orbit be affected by a prograde burn at a location that isn't the periapsis or apoapsis ? For example at the arbitarary A below 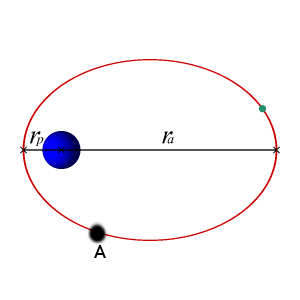 In particular that would be the effect on the orientation of the major axis and the distances of the periapsis and apoasis.

As a general rule of thumb, any prograde or retrograde burn establishes a new orbit tangent to the old orbit at the point of the burn. A prograde burn increases the length of the major axis, while a retrograde burn reduces it. To demonstrate, I set up a situation similar to yours in Kerbal Space Program, and had it draw the results of two proposed maneuvers. In both, the solid blue-green line is the initial orbit, the dotted brown line is the the result of the maneuver, and the star shape is the point of the burn. 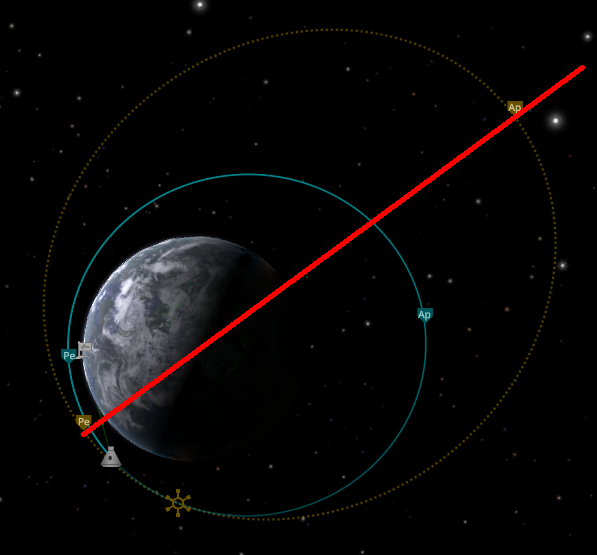 A prograde burn at your proposed "point A" extends the major axis, raising both the periapsis and apoapsis, and rotating the major axis in the prograde direction. 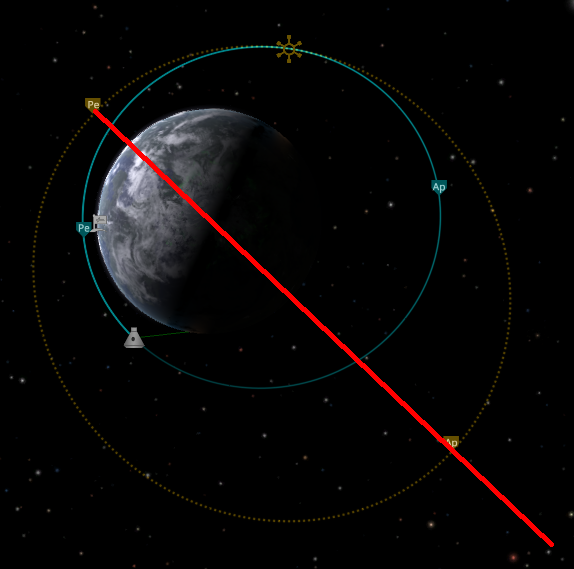 A prograde burn on the other side of the orbit's major axis also raises the periapsis and apoapsis, but rotates the major axis in the other direction.

Not the answer you're looking for? Browse other questions tagged orbital-mechanics orbital-maneuver orbital or ask your own question.

4
Prograde/retrograde vs radial/antiradial burn - why are the former so much more common?
3
Optimum delta-v burn to change periapsis or apoapsis at an arbitrary point on an elliptical orbit?
3
Calculating dV to raise apoapsis at an arbitrary point of an orbit
4
Optimal change of argument of periapsis?
2
Given orbital parameters and position vector along that orbit, how can I determine the eccentric anomaly at that point?
4
Finding x,y,z, vx,vy,vz from Hyperbolic orbital elements
6
What is this perturbation effect called, and what would be an analytical expression for the resulting eccentricity oscillations?
6
How would off-apsis burn affect the angle and position of new apoapsis
3
How does one calculate the argument of periapsis of an orbit after an arbitrary maneuver?
3
Why does this formula for the required delta v of a semi major axis alteration not work or am I I misinterpreting it?