Copper abundance in the Moon

I have been searching many times for information regarding copper abundance in the Moon, but until now, I haven't found any that clearly expresses anything about its abundance.

Would it be viable to extract copper in the Moon, considering a reasonable general abundance of it? Also: are there any specific places in the Moon, with high copper content that could be extracted, not generally, but somehow like mines for specific minerals here in Earth?

I'd advise strong caution as to drawing conclusions as to what there is and isn't on the Moon, as all we know comes from a few trunk-loads of rocks, satellite imagery, and theory, which in planetary science still tends to be spectacularly wrong rather often. But in terms of anything easily accessible, there is very little copper on the Moon.

The Lunar Sourcebook is available in full online and for download, and has all the numbers from Apollo. Samples from Apollo remain the best resource for trace minerals like copper.

Here is a graph of the copper found at all the landing sites where samples were collected, from page 417 of The Lunar Sourcebook: 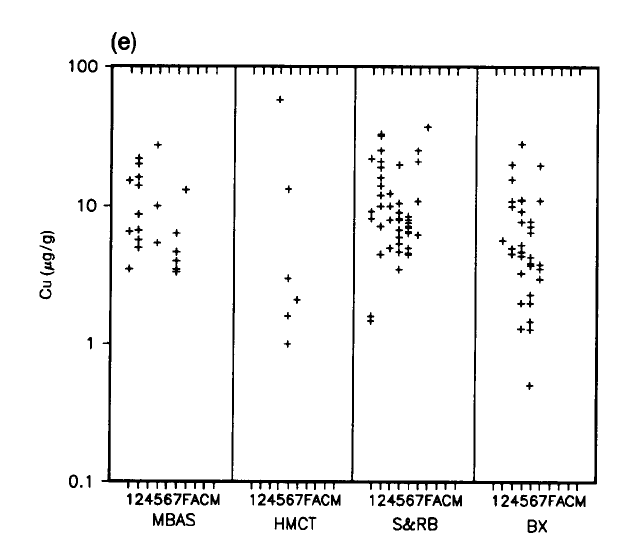 The legend for that graph was on the previous page: 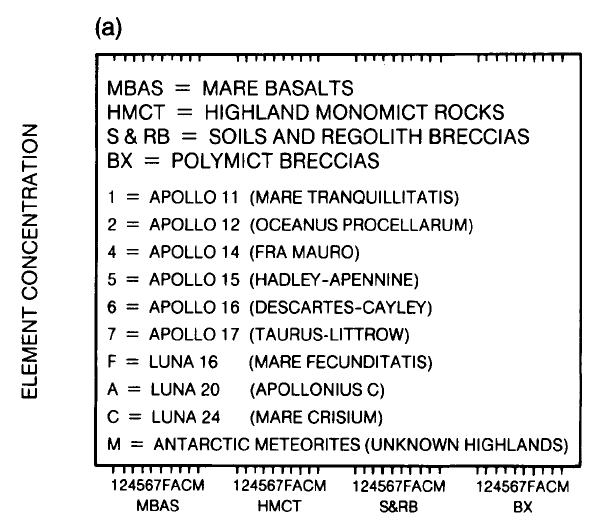 So, the highest concentration found was in highlands rocks collected during Apollo 15, and it had around 60 ppm. For comparison, copper ore on Earth has been seriously depleted, but still has around 0.6% copper, which is a hundred times more copper than anything found so far on the Moon.

Then again, we've only poked around for a total of 2 weeks, with 12 guys, in 6 spots on the Moon, and managed to snag a few rocks with robots.