Will SpaceX attach its fairings to a booster to recover them?

Elon Musk has said that SpaceX is going to try to recover the fairings that protect the payloads on the upper stage. If SpaceX were to try and 'fly' the fairings back safely, they would have to add small rockets, fuel, possible heat shielding, and probably parachutes to the fairings, and that would add weight to the upper stage which in turn would reduce the possible size of payloads that can be sent up.

Assuming that Elon doesn't want to add a substantial amount of weight to the upper stage to recover the fairings, could he use the first stage booster(s) to wait for fairing separation, go pick up and attach the fairings to the top of the booster, then perform the boost-back burn?? I assume this would take a bit more fuel to pull off, but the extra fuel would be in the first stage and ultimately cheaper in the long run.

Here is a visual to help explain what I'm talking about, I know that this is not to scale! 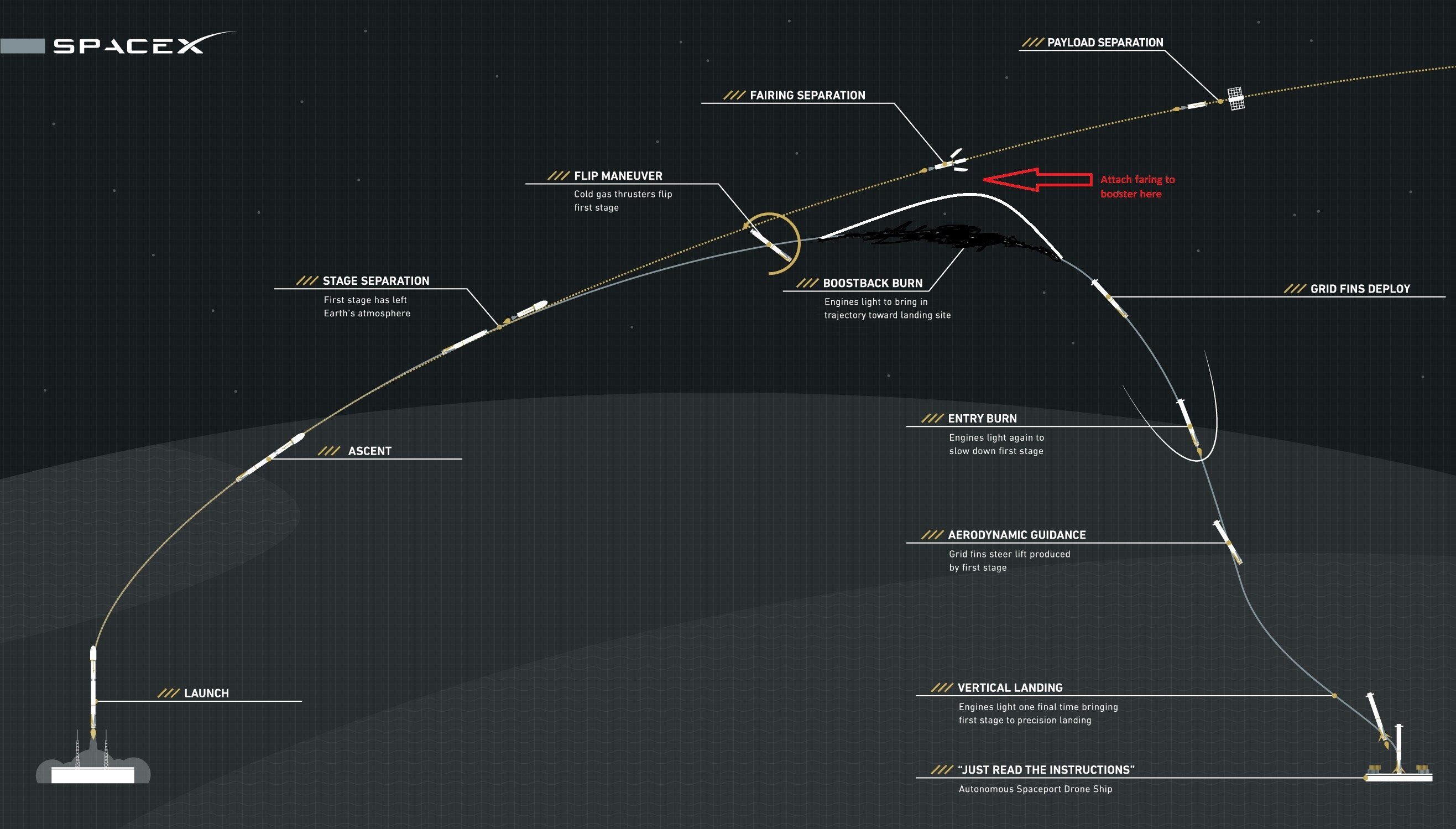 The plan as has dribbled and drabbled out from Musk's various statements is that the fairings are large and light, thus reentry heating is not too bad on them. They do not need to do a re-entry burn as the first stage seems to require, in order to slow down enough that hitting the atmosphere does not melt the entire structure.

Then once in thicker air, a parachute/parafoil is to be deployed to try and guide the fairing to a specific recovery area.

In the post Falcon Heavy video, Musk said that they are having issues with tangling the parachute lines.

Once down low and approaching the ocean, currently the fairings have been hitting the water. There is a ship in California with large arms attached that is postulated to somehow try and catch the fairing before it hits the water. Whether this is via a net or somesuch is still open to debate and further evidence. 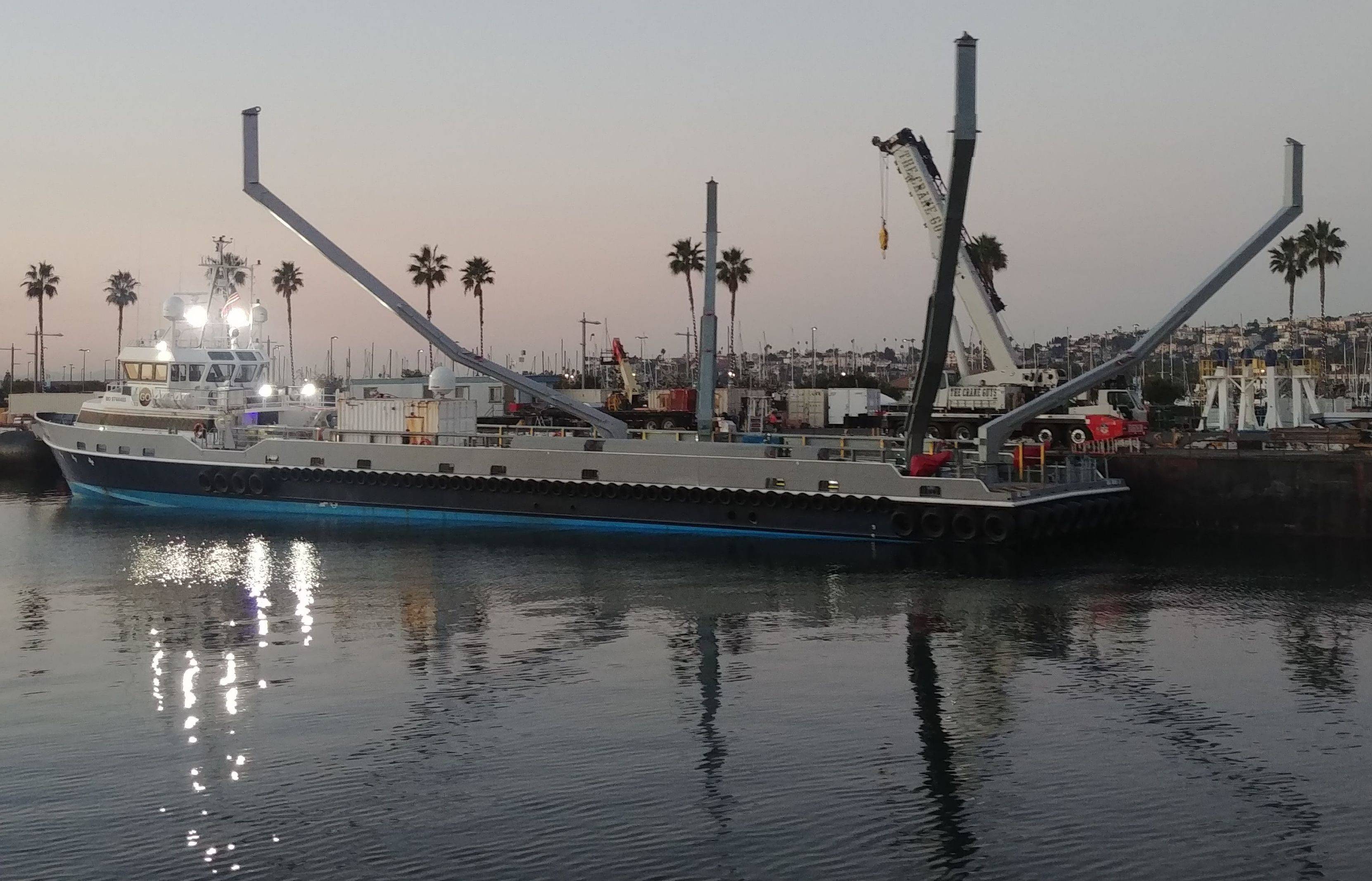 All that said to explain the current approach.

Looking at the timeline for a Falcon 9 mission (Used Zuma since it came up first) we see that MECO (Main Engine Cut Off) and when the first stage starts working on getting back, happens at 2:20 in the flight.

Fairing separation happens at 3:08 in the flight. That is 48 seconds, which does not seem like much time, but in that interim, at 2:33 into the flight the boostback burn has already started.

No matter how you delayed the boostback burn, the fairings will have a lot more velocity, be a lot higher, and quite far away, such that the first stage could not realistically catch up or loiter to collect the fairings.

Then ignore the issue of how you mate two very large fluffy objects to a first stage, all while falling deeper into the atmosphere further every moment.

This seems unlikely to impossible.

(I did look at some other flight profiles and MECO/Boostback/Fairing separation do differ slightly, but the example seems sufficient to make the point).

I know its a little late, the fairings are attached to the second stage. There are plans to eventually recovering them also. Then it might be something to consider but until then its not only not viable its not realistic because the fairings would have to be able to turn and fly to the first stage and have hardware to dock with. Redesign - delay or redo man rating, engines - weight, new hardware - weight.

Ince they start returning second stages it becomes more realistic, but then they will have to lead or follow into the heavier atmosphere meaning they will be subjected to fairly intense heat. As close as I can figure the reentry speed us around 3000 mph, and heat generated is related to the cube of the speed so that translated to laymens terms is s***load of heat. The fairings would have to be heavier because they would have to be able to handle the heat and they would have to be reinforced structurally - weight. Even following there are some fairings that are larger than the diameter of the stage, so that would add drag - heat and stress - reinforcing - weight. Also since they are designed for stresses of acceleration and compression forces during launch thy would likely flex some making the stage unpredictable or even to end up with excessive yaw which could result in the disintegration of the entire craft.

I live about 9 miles form the landing zones and if one disintegrated during reentry we might need a steel umbrella here.

22
How does SpaceX plan to achieve reusability of the Falcon 9 *second* stage?
28
What makes 21st century fairings so valuable that they'd potentially be recovered and re-used?
6
Do each of the fairing halves now use thrusters post-deployment? How does that work?
19
Why is Falcon 9's fairing so big?
1
Would having the Falcon fairing reconnect be possible/beneficial?
25
How will SpaceX Starship deploy its payload?
6
How do ships catch fairings? Can fairings steer or do the ships do all the work?
3
Does RUAG Space recover and reuse Ariane 5 and Atlas V payload fairings after splashdown?
3
Is it really possible to catch the Super heavy booster by using the launch tower ? How Challenging will it be?