What was the probability that Osiris Rex would find Earth Trojans?

Orbits at the Sun-Earth L4 and L5 (where Earth-associated Trojan asteroids might reside) are not long term stable due to Jupiter's large perturbing effects.

Since force is proportional to mass divided by distance squared, Jupiter will exert a force between about 18 and 8 times larger (respectively) than Earth does at these points.

This would on any normal celestial time scale mean that anything at a Lagrange point would not be held there for very long.

So what factors would make NASA/JPL think they would find any Trojans at the Lagrange points?

The one known Earth Trojan was discovered because it got so close to the "camera"!

If a telescope could be moved across a larger area, the chances of finding another only increase.

The idea that Trojan asteroids are supposed to be at the Lagrangian points is not really right though. If you watch the Scott Manley video Asteroids In Resonance With Jupiter after 00:34 there's a nice illustration of how Trojan asteroids circulate around the Lagrange points in elongated (and sometimes teardrop-shaped) orbits. 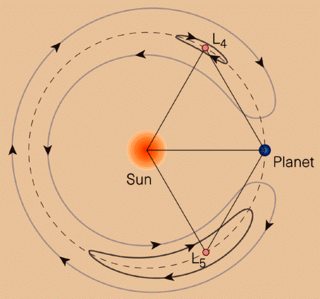 Tadpole and horseshoe resonant orbits in a Sun-planet system, shown in a frame rotating with the planet's orbit (source: Nature)

above: image and caption borrowed from this answer. Click for larger view.

Remember that these asteroids are in heliocentric orbits. They are already in orbit around the Sun with a period of almost exactly the same as Earths. The Earth only gives tiny nudges and pulls whenever the asteroid gets closer to it, and that may happen with a period of tens or hundreds of years. So it's better to think of Trojan asteroids as "loosely associated" with the L4 and L5 Lagrangian points, and not really "held" there.

While Jupiter's pull may be substantial, it moves around in its own orbit fairly fast. So while it may pull in one direction for a few years, a half-dozen years it's pulling in the opposite direction, and so despite the strength, it is not as destabilizing as one might think at first. Remember the asteroid is in an orbit around the Sun, not the Earth.

And of course another reason that NASA/JPL thinks that there might be find-able Trojan asteroids associated with the Earth's Lagrangian points is that we definitely have at least one already!

2010 TK7 was spotted from Earth as it wound its way around it's very long Trojan orbit and got fairly close to Earth in 2010. In 2011 the paper in Nature suggests the stability could be 10,000 years. Since that time many more observations have been made and stability predictions of the orbits have been refined.

There is a nice summary of the situation in this oldie-but-goodie answer, and here is one of several slightly confusing videos of TK7's orbit. Also one can read more about Osiris REX's search as well as 2010 TK7 in:

It appears to have been less of a decision based on concrete evidence and more one based on the convenience to do it.

The OSIRIS-REx mission's main objective is to carry out a sample return mission from 101955 Bennu in the hopes of being able to further analyse the asteroid.

According to the University of Arizona news the decision for the search came shortly after the project got funding from Nasa, from Regent's Professor of Planetary Science at LPL, Renu Maholtra.

"I said to Dante, 'Hey, while you're in that neighborhood of the solar system, you should check out the scenery!'" she says. "I'm thrilled that he and his team were very persistent in making the case to NASA, obtaining approval and making a plan on how to go about the survey."
UANews - Surveying the Scenery 90 Million Miles From Earth

The scenery referenced by Professor Renu Maholtra, is in fact any objects in the stable orbit at L4. According to Dante Lauretta, the Principal Investigator of the mission, from the University of Arizona, suggest the opportunity presented by the OSIRIS-REx's pass through the Lagrangian point, he, furthermore, expresses the expected likelihood of there being objects there that were not found due to the difficulty of observing objects at L4.

"Because the Earth's fourth Lagrange point is relatively stable, it is possible that remnants of the material that built Earth are trapped within it," Lauretta says. "So this search gives us a unique opportunity to explore the primordial building blocks of Earth."
ibid.

The exercise also had the added benefit of getting to know the limits of the spacecraft:

The Earth-Trojan Asteroid Search was a significant success for the OSIRIS-REx mission,” said OSIRIS-REx principal investigator Dante Lauretta of the University of Arizona, Tucson. “In this first practical exercise of the mission’s science operations, the mission team learned so much about this spacecraft’s capabilities and flight operations that we are now ahead of the game for when we get to Bennu.
AsteroidMission.org - OSIRIS-REx Asteroid Search Tests Instruments, Science Team

For more information on the search and the benefit it brings, for those interested, can be found in the article linked.

The video below discusses the OSIRIS-REx, and the pass through the fourth Lagrangian point:

Not the answer you're looking for? Browse other questions tagged lagrangian-points osiris-rex or ask your own question.

5
Does the Earth have any Trojan asteroids?

19
How deep is the force well of L4 and L5 Lagrangian Points of Earth-Sun set?
4
How will OSIRIS-REx scan and characterise the near-earth asteroid Bennu?
16
What are the differences in technology between OSIRIS-REx and Hayabusa missions?
8
Why was OSIRIS-REx almost destroyed because of a loss of pressure following the SpaceX "fast fire"?
0
Why is Osiris-REx using an Earth flyby gravity assist?
2
Where are the 6 22-N OSIRIS-REx engines?
2
Are the estimated chances of Bennu hitting Earth in the next 200 years still about "1 in 1410" now that OSIRIS REx has scanned it?
2
What's going on with the OSIRIS-REx sample caption video that's circulating on twitter?
6
Could the uncertain mass of the OSIRIS-REx sample affect the trajectory of the return capsule?
10
Why are Jupiter's trojans even remotely stable?