How many SpaceX Starlink Internet-service satellites could be deployed in a single Falcon 9 launch? Falcon Heavy? BFR?

The mass of the two test satellites being launched this month is 400 kg, but I don't believe that includes the antennae and the structure to hold and release them. Is total mass the only constraint or would the volume further constrain the number of satellites?

EDIT: With the third Starlink launch happening about right now, it's time to update this answer! We now know that each satellite has a weight of 260kg, and that they launch 60 satellites per mission. They are flat packed, stacked 30 up side by side in the Falcon 9 Fairing, and far smaller than what I thought would be possible in my first answer.

Elon Musk stated that they need at least 6 launches of 60 satellites to cover the US and Canada, and about 24 launches to provide global coverage (Phase 1 calls for 1584 satellites in the constellation). The full 12000 satellites constellation would be complete after 200 Falcon 9 launches.

So yeah, that about answer really the question.

With their new in-development Starship system, the payload goal is 100T to orbit. That would be about 384 satellites per launch. This would be about 32 launches from Starship to deploy the full 12000 satellites constellation. However, I personally believe the Starlink constellation will be operational before Starship is available to fly at full capabilities.

Something I did not take into account in these calculations is the likely reduction in weight of the satellite during the mass production. For example, the Orbcomm OG2 fleet weighs in at 172 kg per satellite. This is a likely goal for SpaceX's satellites (and this would allow twice as much satellites per launch).

Also, the satellites are already fitted with antennas. Phased array antennas can be really tiny!

As per the Falcon 9 User Guide, the payload to LEO when flying fully expendable is 22 800kg. However, it's unlikely SpaceX will orbit their satellite fleet (all 12 000 of them, from this link) flying expendable. The Falcon 9 Wikipedia page cites a 9 600kg payload capability in the reusable configuration.

This would amount to a staggering 24 satellites per launch.

We know SpaceX has already launched thirty new satellites of the IridiumNEXT constellations in three launches. Their injection orbit is not far off the one of SpaceX Starlink, and the satellites weighs in at about 860kg (as per this article).

This is consistent with our findings too.

However, as you mentioned, all of this did not account for the payload attach fitting (the thing to hold and release the satellites).

If we use again the Iridium flights as reference, the PAF configured with 10 satellites was about 1 000kg max. This would drive the available payload mass down to 21.5 satellites.

I will round that down to 20 satellites, arranged in 5 rows of 4, with an alternate pattern (i.e. first row North/South/East/West, next row NE/NW/SE/SW, etc...) since they will want to have them detach from the PAF two by two in a coordinated fashion.

Moreover in this configuration, the PAF can weigh up to 1 600kg, which should be plenty enough for 20 satellites smaller than Iridium's.

However, we also have to check those would fit in the fairings. The Falcon 9 User Guide also gives us the internal dimensions of the fairing. Fitting 5 rows of 4 satellites should not be a problem here. 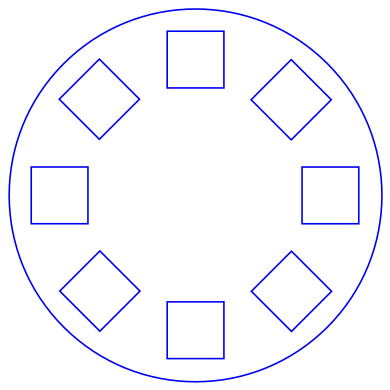 Also, this would amount to a total of 600 launches on the Falcon 9.

Some people suggest that volumetrically, 40 could fit as follows: 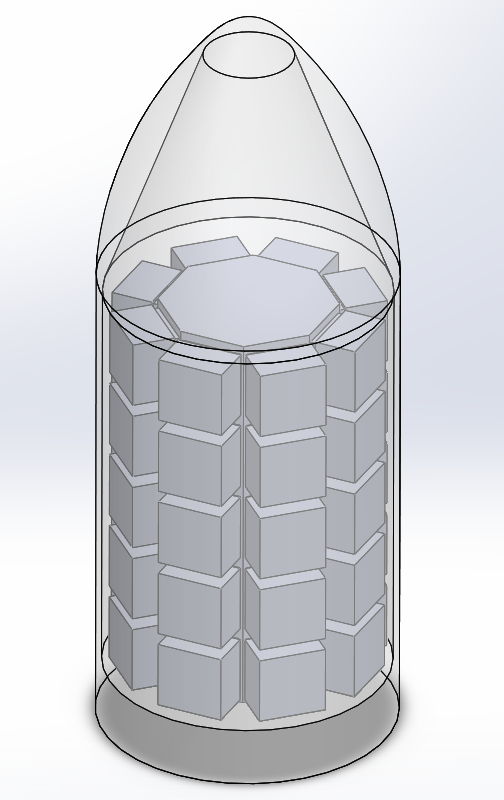 The Wikipedia page for Falcon Heavy, and available info on SpaceX's own website, does not reference a payload mass when flying fully reusable. I will assume it's the same ratio as with the Falcon 9. When flying reusable vs fully expendable, payload mass is reduced by 2.375 (22 800 / 9 600).

64 satellites would gives us a margin of 1 600kg for the PAF. Seems a bit light to me for 64 satellites.

Regarding the physical space, we can assume the Falcon Heavy fairings are about the same size as the Falcon 9 ones (same core diameter).

If we fit 8 satellites per row, that would gives us 8 rows of satellites. It's starting to get a bit cramped, especially near the top. However, with some special arrangement, I believe this could still be done.

This configuration and the launches on Falcon Heavy would amount to 188 launches.

This is going to be a bit easier but less precise. The Wikipedia page for BFR gives a maximum payload mass of 150 000kg when flying reusable. (No, that is not a typo. It is 150 metric tons to LEO.)

368 satellites would gives us a margin of 2 800kg for the PAF. Definitely, that is not enough for that number of sats.

I reckon the number of satellites per launch on the BFR will be in the ballpark of 304 satellites (this would make the PAF weigh up to 100kg/satellite, same as the IridiumNEXT launches).

Core diameter is 9m. The rest of the available payload space is not known.

However, fitting 304 satellites in 19 rows of 16 satellites should be possible I believe.

With this configuration, there would be 40 launches on the BFR.

Here's a table for gromain's answer, which assumes 400kg/satellite and 12k satellites. It includes prices from spacex's website as a rough estimate.

I agree with the lift capacity of BFR at 304 Starlink satellites, by weight and probably dimensionally. But there is the problem of each orbital plane on the first Starlink Phase I only has 34 satellites in it. See the section on "How many launches...". But changing from one orbital plane to another costs a substantial amount of fuel, it is unlikely that BFR can change to 9 different orbital planes in one flight, though it is also possible that each satellite will have enough of a thruster to make the change for itself over the course of a few days.

Not the answer you're looking for? Browse other questions tagged spacex falcon-9 falcon-heavy satellite-constellation spacex-super-heavy or ask your own question.

4
Were MicrosatA-B represetative of final design for Starlink?

9
How many engine firings can a SpaceX Falcon handle?
5
How were the 10 Iridium NEXT satellites deployed by SpaceX?
11
Do 'size of a bus' sized F9 fairings ever float after impact? Are they navigation hazards?
4
SpaceX Falcon expected life span (how many reflights?)
4
How does SpaceX Falcon Heavy Starman live feed transmitter work?
4
Were MicrosatA-B represetative of final design for Starlink?