Was the Apollo 13 CM guidance computer fully shut down?

I was watching the movie Apollo 13, and one thing struck me as quite odd. According to Wikipedia,

[Movie director Ron] Howard went to great lengths to create a technically accurate movie, employing NASA's technical assistance in astronaut and flight controller training for his cast, and even obtaining permission to film scenes aboard a reduced gravity aircraft for realistic depiction of the "weightlessness" experienced by the astronauts in space.

However, around 63 minutes into the movie, during the command module shutdown scene, the movie shows the command module's guidance computer being shut down followed by mission control stating "computer off" and specifically confirming shutdown of the CM computer with indications on one of the big screens in the background that would appear to state that the telemetry values are out of range.

What I find weird is that even after the DSKY digital display is turned off and during the "Odyssey signing off" scene immediately following it, the CM computer DSKY shows the STBY light seemingly turned on. According to Wikipedia, standby mode was originally designed for use in mid-flight and to reduce the CM computer's power consumption from 70 W to 60-65 W, though "in practice ... this feature was never used".

Obviously some things were changed for dramatic effect in the movie (for example, the apparent proximity in time between the cryo tank fans being turned on and the explosion, which in the movie is depicted as being on the order of a few seconds whereas in reality it took considerably longer), but this seems like a really silly mistake to make if one sets out to make a technically accurate movie.

If I get you correctly, this should be the moment from the movie you're talking about:

And this is the corresponding part of the movie script:

To not bore you with too many details, yes, the DSKY warning lights stayed on after the power down of most of the Command Module systems and before moving to the Lunar Module. Here's the part from the Apollo 13 Technical Air-to-Ground Voice Transcription that should clear all doubts:

Joe Kerwin (CAPCOM): Okay, Jim, since we're in LOW BIT RATE now, we cannot monitor the DSKY for program alarms, et cetera, and we recommend that, in order for you to do so on board, you push in the following circuit breakers: On panel 11 and panel 16 the ANNUNCIATOR / DOCK / COMPONENT circuit breakers. That will allow you to monitor your DSKY warning lights. Over.

The same transcript is also available in a bit more convenient (searchable) format on spacelog.org. And this is how the real Apollo 13 DSKY looked like: 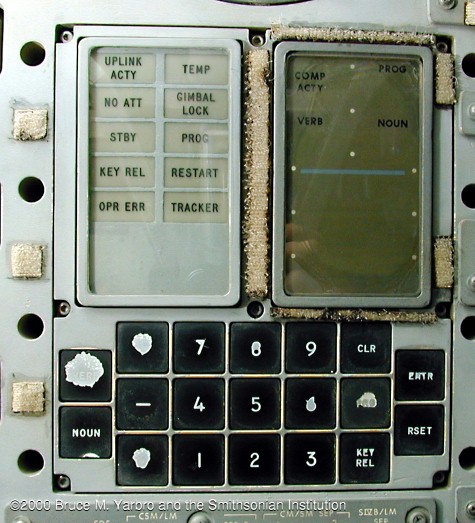 Now, if you checked the Apollo 13 mission transcript, you probably noticed that the movie script actually has little to do with the real mission's transcript, but I guess that's OK since the procedures involved with shutting down CM systems were really nothing like flicking a standby allowed switch and setting AGC in a power-saving mode, like the movie depicts. This was in no way a normal flight computer to a standby mode procedure. It was a shutdown, as much as possible and involved a lot of on site reprograming, turning off circuit breakers and following exact sequence order so the computer could be later turned back on and still consume as little of power as possible while the crew occupied the LM on their way back to the Earth. The mission transcript attests to this with dozens of pages of comms lasting several hours, something that happened in the movie in a maybe a few seconds. Probably for the better too, I doubt we'd be having a discussion on the accuracy of this movie, if it actually was more accurate. Rare few would ever go and see it.

This hopefully answers your first two questions, now for the last one, if the Apollo CM was even designed in such a way that it was possible for the astronauts to fully power off such a critical system as the main guidance computer in the middle of the flight? No, this was certainly not something that the Apollo missions were designed for but it obviously wasn't impossible either. A lot of ingenuity went into saving the crew of Apollo 13 and getting them safely back home. The ground team was working around the clock to think of ways to solve problems the crew was faced with, and powering down the CM merely being one of them. Apollo missions of course had all kinds of contingency plans (emergency power down being one of them), but with this one, everyone was thinking on their feet:

TL;DR: Yes, this shot makes sense in the Apollo 13 movie, even if the script didn't follow the mission transcript exactly to the letter:

Not the answer you're looking for? Browse other questions tagged crewed-spaceflight apollo-program flight-computer myth-busting apollo-13 or ask your own question.

18
Were all the switches on the Command Module and LM control panels used during a mission?
11
How was the Giotto spacecraft reactivated from hibernation mode?
3
Where can I find the amended/improvised checklists for Apollo 13 post-accident?

17
Is there any merit to the Apollo 13 (movie) statement "a computer that can hold millions of pieces of information"?
20
Could an Apollo LM land uncrewed?
13
What colors were used in the Apollo Lunar Module interior, and why?
9
Did Charlie Duke actually get the measles?
25
What spacecraft control is Margaret Hamilton pressing in this picture?
15
Why was the Saturn V considered to be human-rated after Apollo 6?
12
Double redundancy for the Saturn V LVDC computer memory, how were disagreements resolved?
5
What was back-up plan in case of Apollo CSM Primary Guidance System IMU went to gimbal lock?
31
Was the Apollo 13 CO2 problem a matter of capacity, or of rate?