Which chemical propellant combination has the highest theoretical isp?

That is disregarding practical factors like making a bomb rather than a rocket in the case of using acetylene+ozone.

I know that the highest isp achieved was 542 with lithium, hydrogen, and fluorine. I assume that the acetylene and ozone combination would be more in the range 600. How high can that number go?

What about monatomic hydrogen? The bond energy of $H_2$ is 436 kJ/mol, but a mol is only 2g, so you have about 218 MJ/kg of available energy. If you could get 100% of that into axial kinetic energy of the $H_2$ that would be an exhaust velocity of around $20 km/s$ for an $I_{sp}$ around 2000s. Some would inevitably be lost as waste heat, through thermal dissociation of the $H_2$ and as lateral KE, but four figures might still be within reach.

Of course it can only be stored for short periods as an extremely diffuse ultra-cold gas in a magnetic field, and I certainly would not like to try and pump it, but the question did specify no practical considerations.

A few years ago there were a number of presentations and articles around the idea that if metallic hydrogen is metastable, it could be a very powerful fuel (definitely four figure $I_{sp}$). That said, while there were some very hand-wavy arguments from physical principles and some obscure hints from experiments, there is no actual evidence that I know of that metallic hydrogen is metastable.

Of course if you had very strong tanks available, you could just store it under pressure to keep it stable.

There is a paper that has looked at a number of tripropellant combinations, looking for the optimum theoretical ISP. The optimum appears to be Be/ H2/ O2, at 460 seconds at sea level. This paper states the theoretical max of Hydrolox is 532, with the additional 69 that the first paper state by adding beryllium, just over 600 is theoretically possible, in a vacuum. But using Beryllium is basically impossible as a rocket fuel, at least as we know it today. 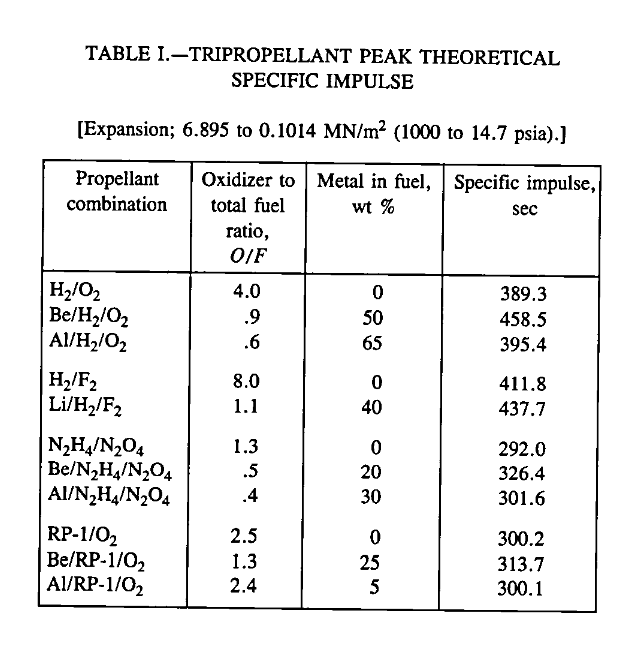 Not the answer you're looking for? Browse other questions tagged fuel specific-impulse or ask your own question.

7
Is there a maximum Isp for “exothermic chemical reaction rockets”?
2
What would be the performances of chlorine trifluoride as an oxydizer?

11
Is it possible to use zinc powder as a NTR propellant?
7
Is there a maximum Isp for “exothermic chemical reaction rockets”?
26
What was the result of the propellant predictions in the last chapter of “Ignition!”?
11
Where is the Lithium-Fluorine-Hydrogen tripropellant currently?
6
Understanding Von Braun's Math: Theoretical Isp
3
Is there a chemical propellant combination with Isp between Methalox and Hydrolox?
2
Hypergolic Propellant Combination
8
Have there been rocket engines designed for diesel? What ISP theoretically possible?
4
Do lower pressure pressure-fed rockets get more Delta-V?
7
Which theoretical propulsion system has the highest specific impulse?