Why were the Sputniks launched to such high apogee?

Sputnik I was launched to reach as high as 939 km above the sea level and made 1440 orbits. Vostok I with Gagarin aboard was launched to 327 km for one orbit. Wouldn't 200 km or even less be enough to make an orbit?

Was this optimal from an orbital mechanics point of view, given the launcher and payload and location of the launch site and whatnot? Or was it also a kind of political show-off that they had margins to do more? Or was it yet unknown how the R-7/Soyuz launcher would perform? Would the same trajectory have been chosen today by a small-sat launching start-up company, in order to demonstrate orbital space flight capability?

The important number here is the perigee, not the apogee. In order to make this amount of orbits, you need to have a certain height of perigee in the order of 200 to 300 km. A circular orbit of 250 x 250 km would certainly have sufficed their needs.

But: The important word here is 'circular': You can't get directly into a circular orbit. After launch you'll always end up in a elliptical orbit and you need to do another burn of your engine *) to circularize the orbit. Given the state of development of engines and control systems 60 years ago, it was much simpler to design an engine that does one long burn to get a high apogee and at the same time a perigee that is high enough to stay in orbit for some time.

As Uwe comments, the design of the Sputnik launcher was kept extremely simple: It didn't even have an actual second stage as we know it from today's rockets. The central engine as well as the four booster engines were ignited at lift-off. The boosters were dropped after two minutes while the center core continued to orbit.

*) as Russell Borogove points out, a single burn is sufficient, if it is long enough and if the attitude of the spacecraft can be changed during the burn. The Sputnik main stage burned for only 5 minutes, which is too short, and didn't have an advanced attitude control system.

Elliptical orbit for Sputniks was chosen because it was easier to achieve, i.e a single burn was reqiured instead of utilising the need for the second burn for the orbit circularization. Note (as also mentioned in the other answer) that the "second stage" of R7 rocket was ignited together with the four boosters at liftof, and also Sputnik-1 was the third ever successful launch of R7 so perhaps at the time they just didn't want to mess up with the need to allow for second stage reigniting in orbit. The rocket's primary role was ICBM, after all.

I couldn't find sources that explain why the apogee was so high, but it was definitely intended and calculated pre-flight. I could only assume that being at so early stages of R7 development, they just squeezed the maximum out of the rocket. In fact, specifically for Sputnik-1 the R7 mass was reduced by 7 tons: Translated from Russian:

Compared to the standard R7 rockets, the mass of М1-PS [the rocket serial No.] was greatly reduced: massive warhead was replaced by the satellite transition part, the radio control system equipment and one of the telemetry systems were removed, the engine shutdown automation was simplified.

Mikhail Tikhonravov worked with Sergei Korolev to solve the problems of rocket design for space exploration.

The reason for elliptical orbit of the first Sputnik is described in his memorandum "On the artificial Earth satellite" (1954) (in Russian).

The simplest automatic satellite can be considered as the first stage in the creation of more advanced and complex satellites. The simplest satellite can move in elliptical orbit, which is easier to achieve than the circular, whilst circular orbit would have been most suitable for a satellite station [meaning more sophisticated spacecraft, probably even habitable]. It can be shown that to achieve circular orbits, it is advisable to divide the 'active section' of the flight into two further parts; the most economical in terms of energy costs is the following path. The 'active section' is chosen so that the velocity vector of the "product R" [codename for the R7 rocket] relative to the center of the Earth at the end of the first part of the 'active section' is perpendicular to the radius of the Earth. The magnitude of the speed after the end of the engine burn should ensure the satellite moves along an ellipse with apogee equal to the height of a circular orbit. The perigee of this ellipse will coincide with the point at which the engine burn finishes. At the apogee of this ellipse, additional [after]burn is performed, which would result in the satellite entering a circular orbit or into an orbit close to circular. If, for the simplest satellite, we do not perform the [after]burn at the apogee of the ellipse, (where the need to perform such a burn would have required to: a) accurately determine the apogee point; and b) orient the satellite [meaning to arrange for provision of ability to control the satellite attitude] correctly at this point), then we obtain motion along elliptical orbit that [as described above] would be transitional for a satellite intended for a circular orbit. 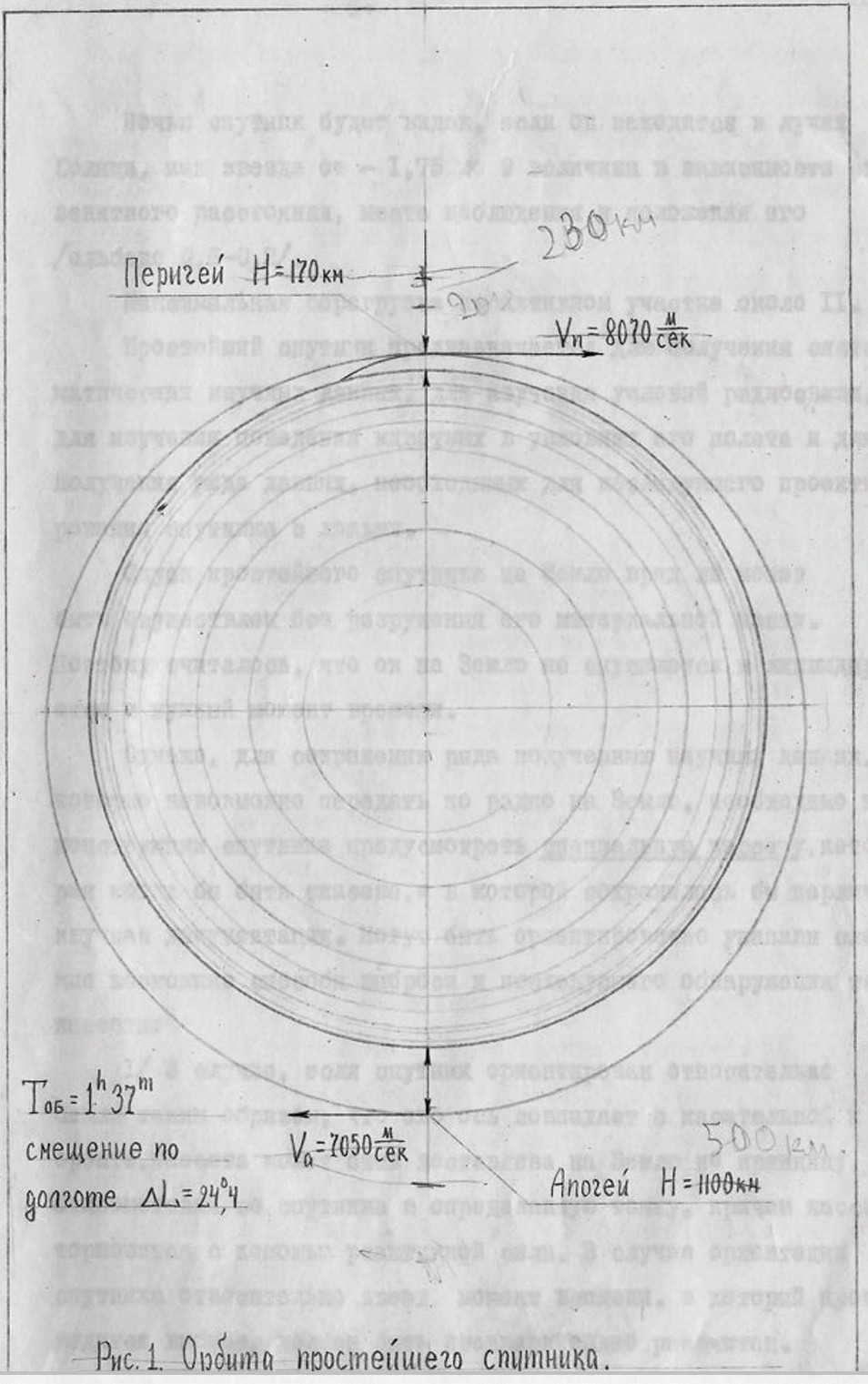 In 1957, the originally planned heavy satellite (with scientific package) was running way behind the schedule and as USSR was fearing that USA were going to launch artificial satellite first, decision was made to launch the "Simplest Satellite", which Sputnik 1 was.

For this smaller satellite, the estimated planned orbit was 223 by 1,450 km, but R7 rocket underperformed during the launch and this resulted in Sputnik-1 apogee approximately 500 kilometres lower than intended.

The reasons for elliptic orbit (with high apogee) of Sputnik-2 and Sputnik-3 were presumably the same.

Orbit trajectory calculations for the first Sputniks were performed by Georgi Grechko.

Not the answer you're looking for? Browse other questions tagged orbital-mechanics history sputnik or ask your own question.

22
Did Sputnik 1 have attitude control?

6
Why is the SES launch going to an apogee of 80,000 km?
15
Is there any footage of the rocket that launched Sputnik 1?
33
Why were early Soviet spacecraft spherical?
10
If a rocket launched due East from a high latitude, what happens to its path?
3
How were polar or retrograde satellites launched in the early 80s?
13
Why multiple GPS satellites are never launched on the same rocket?
1
What were the two circa 1965 semi-polar missions launched from Cape Canaveral?
14
Why were the Titans so expensive?
7
What was the first Soviet spacecraft that could recharge its battery it each orbit? Where were the photovoltaic cells made?