Will uncovering the ice deposit in Utopia Planitia improve the climate on Mars?

In 2016 a large ice deposit has been found within the Utopia Planitia region on Mars by the SHARAD instrument on board of the Mars Reconnaissance Orbiter.
The thickness of the deposit ranges from about 80 meters to about 170 meters with a composition that's 50 to 85 percent water ice, mixed with dust or rocky particles.
It is shielded from the atmosphere by a soil covering estimated to be about 1 to 10 meters thick.

The volume of the ice in the deposit is estimated to be about 14,300 cubic km, so the mass will be about 14 teratonnes, the mass of the atmosphere of Mars being 25 teratonnes.

Now, if bulldozers could remove the soil covering in summertime, at daytime the ice would sublimate into the atmosphere and the water vapour would be spread out by the winds.
Of course, at night the vapour would deposit on the surface again, and when all the ice of the deposit would be spread out evenly in this way about the whole planet, it's thickness would be about 10 cm.
In practice however, it's likely that the various winds will gather the ice at certain places.
Because at any time only a small part of the surface of Mars will be heated enough by the Sun to sublimate the deposited ice, the global pressure of the atmosphere would not raise much.

But will not at daytime high-pressure area form at places where the ice has sublimated and could not locally, if only for a few hours, the pressure raise significantly by the water vapour ?

If so, the low regions of Hellas Planitia could have transient liquid water on the surface and that would have a positive feedback on the climate in that region.

Well, let's see how we can try to calculate that. First of, we need to find out what is the mass of the column of air on Mars and then find out how much mass the sublimation of ice will add to it and what the effect on atmospheric pressure will be. Also, we will need to study a bit the water phase diagram.

But we will start by evaluating the possibility of sublimating all this ice.

Can we even sublimate all this ice?

At any moment in time, Mars receives between 492W/m² and 715W/m² of solar radiation (in space, before being filtered by its atmosphere).

To sublimate the ice, it's necessary to add 2 590 600J per kilogram of ice. So, every hour, you would vaporize 745 grams of it. Our 10 cm layer of ice weighs in at 100kg, so to sublimate it completely, it would take you around 135 hours, which is much more than 24h39m (the length of a martian sol). And whatever you'd sublimate during the day would just transform back to ice during the night.

It's thus impossible to sublimate all this ice.

But hey, let's check if it can have an impact on the atmospheric pressure anyway.

So, let's start by studying the phase diagram for water! 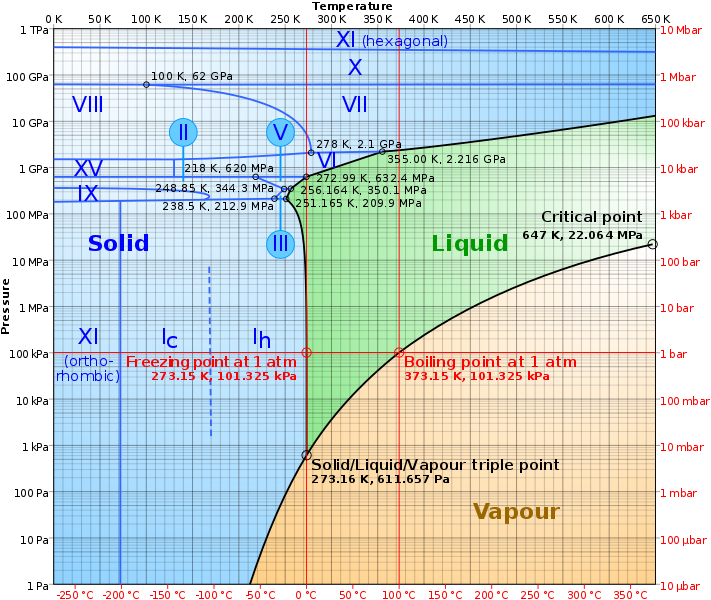 Also, very importantly, if we want liquid water, we will have to be at a temperature above 273.16K, almost regardless of the atmospheric pressure. (The lowest temperature at which we can have liquid water is 251.165K and 209.9MPa).

Regarding what we just learned, it's unlikely having a huge variation in atmospheric pressure will lead to a climate change with a positive impact regarding the availability of liquid water.

What would matter most would be a temperature change.

Let's also have a quick look in the meantime at Mars climate.

We can see that in summer, the temperature regularly go above 0°C with maximums at 30°C recorded. However, since the atmosphere is so thin, there is very few dampening, so the day/night variation is quite high, in the range of a 100K (so -80°C at night, and 20°C during the day).

If you want you can stop reading there: the day/night variation is too high to keep any water liquid through the martian night. So yes, there probably is some water in a liquid state during some days around the equator, however, it's not flowing long enough to have a measurable impact on the climate.

Now, let's see how much pressure the sublimated ice will add to the air.

Little reminder, the average atmospheric pressure is basically the weight of the column of air (martian air throughout this answer) over the surface.

The average atmospheric pressure on Mars sits at 600 pascals, but raises to 1155 pascals down at the bottom of Hellas Planitia. 1155 pascals is 1155 N/m² so this means the total weight of the air column over a square meter in Hellas Planitia is 1155N.

Interestingly, this is above the water triple point. This means there could already be liquid water in some places on Mars without needing to sublimate the underground ice.

Let's say the ice is spread out evenly over Mars to a 10cm layer of ice. This would be 100kg of ice on this square meter. If it's fully sublimated, this layer would be in the atmosphere, so the mass of the column of air will be 411.24kg, which on Mars is a weight of 1526N, so a pressure of 1526 pascals on the ground down at the bottom of Hella Planitia (an addition of 371Pa, or an overall average atmospheric pressure of 971Pa).

The problem we have is that the range of temperature at which the water stays liquid at this pressure is quite low, about 0-10°C.

So, in average over Mars, sublimating all of the ice would not lead to a very significant change in atmospheric pressure regarding the formation of water.

The answer above from @Gromain states that during the martian day a maximum of a 0.7 mm thick layer of ice of the deposit could be sublimated in one hour.
Since part of the Martian year the temperature at the ice deposit will be too low for sublimating, and estimating 2 mm ice evaporating in summer days, that could result in a 20 m thick layer evaporating within a 100 Earth years.

But the main question is : What will happen to the atmosphere of Mars ?

At the ice deposit, the water vapour will be spread out by the winds and will deposit as soon as the temperature drops below zero. In this way, more and more water vapour from the ice deposit will gradually accumulate at places where the ice barely sublimates, like at the poles.

It's thus possible to sublimate all this ice !

Conclusion: the whole deposit could sublimate within a 1000 years, but the climate of Mars would hardly change !

So, if all that water vapour was released into Mars's atmosphere, it may change the climate temporarily, because it would do the work of a greenhouse gas. But it too, would be stripped into outer space by the solar winds. In fact, Mars loses about a 100 grams of its atmosphere every second for the same reason.

Also, Mars has a much weaker gravity than Earth, so it may not be able to hold on to the water vapour for long.

8
How do you mine water on Mars?
5
What is the most economical way to vaporize the CO₂ deposit near the south pole of Mars?
10
Feasibility of Liquid Water at the Bottom of Valles Marineris
2
Could an Igloo work on Mars?

5
What is the most economical way to vaporize the CO₂ deposit near the south pole of Mars?
2
What are the temperature and pressure inside the CO$_2$ deposit on Mars?
3
Would snow fall on the surface of Mars because of uncovering the ice deposit in Utopia Planitia?