ULA's plan for LH2/LOX 2nd stage that can maintain propellant for an extended period of time?

Vulcan should lift 40 tons (nearly three school buses) into low-Earth orbit. That's less than SpaceX's Falcon Heavy, which can lift more than 70 tons — nearly five school buses — for one-fourth the price. But Bruno said there are big differences between the two systems that will make Vulcan competitive.

The key difference is the rocket's upper stage. Falcon Heavy currently uses a rocket-grade RP-1 kerosene as fuel, but it can freeze in space after a few hours. Vulcan's upper stage will use cryogenic oxygen and hydrogen, which are more resilient to the punishing temperatures of space.

LH2 and LOX have about the same molar density, but the stoichiometry requires twice as many moles of LH2. If the tanks are end-to-end, it would mean the LH2 tank intercepts close to twice as much geometrical exposure to the environment as the LOX tank. However, the Enthalpy of vaporization of LH2 on a molar basis is only one quarter that of LOX (see LH2 and LOX).

Further, at 1 atmosphere for example, LH2 boils at around 20K while LOX boils at around 90K. That means without active refrigeration, the heat loading would have to be of the order of $(4.5)^4$ times lower if LH2 was used (assuming passive radiation for cooling), which would be a real challenge in sunlight.

There are two three parts to this question. If I have to split them I will but it's possible an answer can address both at the same time.

Temperature of a Spherical Cow in Space:

Spherical cow as illustrated by a 1996 meeting of the American Astronomical Association, in reference to astronomy modeling. From here: "The image was created by Ingrid Kallick for the program cover of the 1996 annual meeting of the American Astronomical Association. An earlier version was created for the National Center for Supercomputing Applications. The artist gave permission for use to the University of Wisconsin Department of Astronomy. The STScI subsequently used the image. http://www.ikallick.com"

Equilibrium temperature happens when average power in equals average power out, or $\bar{P}_{in} - \bar{P}_{out}$. Averaging should be done over short term variations in attitude relative to the Sun and take into account eclipses for most orbits near the Earth, Moon, or another planet.

where $a_{vis}$ is the visible light albedo, $e_{ir}$ is the infrared emissivity (both should really be weighted averages over the appropriate wavelength ranges; @Tristan's and @Puffin's comments explain this better than their associated answers do), $\sigma$ is the Stefan–Boltzmann constant (about 5.67E-08 W m^-2 K^-4), and I is the intensity of sunlight, and for 1AU is the solar constant and about 1360 W/m^2. Solving for the average equilibrium temperature of said cow gives:

For an average visible-light albedo of 0.95, and an average infrared emissivity of 0.95. this turns out to be about 130 Kelvin at 1 AU, and about 110 Kelvin near Mars, and because of the fourth-root, this varies only slowly with any of the parameters. It seems that space is much more LOX-friendly than LH2-friendly, and only moderate Sun-shielding measures would be necessary to get the LOX down below boiling at 1 atmosphere pressure, like simply having the 2nd stage face the Sun end-on, because cows are not actually spherical.

But what about the RP-1?

If the albedo of a hypothetical "LOX compartment" were 0.1 instead of 0.95 (if it were 18 times more absorbing of sunlight), the temperature would rise by the fourth root of 18, or about a factor of two (see my thoughtful (and unnecessarily down-voted) tutorial on the use of power laws in physics). That would put the RP-1 up near a balmy 273 K or 0C, "sub-cooled" and ready to go! This can be confirmed by the plot of equilibrium temperature of temperature for a spherical blackbody around each of the planets (ignoring eclipses and planetary albedo) found in this answer.

The ACES stage is designed for a lifetime of weeks, not years.

ACES design is optimized with long-duration cryogenic applications in mind. A number of passive-thermal management features are incorporated into the stage at the system level. The tank geometry design minimizes the exposed surface area. Warm equipment is isolated on a separate, thermally controlled shelf, and IVF systems provide a stable thermal environment regardless of vehicle orientation. This is critical for depot applications. Vapor- cooling paths, where vented hydrogen is used to intercept the remaining high-load heat paths, are integrated into the tank structure.

The long-term storage facility may be a separate ULA development called Long Duration CPS where they're looking at dewar storage. 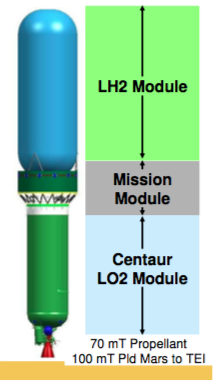 Not the answer you're looking for? Browse other questions tagged liquid-fuel cryogenics ula or ask your own question.

27
Why are RTGs different colors?
26
Does the NK-33 engine require subcooled kerosene so cold that it turns to wax?
17
How does SpaceX plan to deal with boiloff on the trip to Mars?
12
Temperature of a satellite orbiting in low Earth orbit
15
What aspects of reentry heating 'scale as the 8th power'?
15
What's the typical temperature of a satellite orbiting the Earth?
8
Methane internal combustion engines for rovers on Mars and Moon. Feasibility?
8
What are these very large, square panels on Inmarsat 5?
3
What liquids last the longest in space?
4
What was the cause of the second explosion in SpaceX's pad "Fast Fire"?
See more linked questions

10
A cryo tank within another cryo tank...is it a sound engineering concept?
4
Is it correct to say that a LH2/LOX rocket uses water as propellant?