If you are already in low earth orbit the fuel gains are negligible when you start from a polar orbit. The possible transfer windows however are greatly reduced, to two per month (one moon orbit), compared to every 90 minutes. (one spacecraft orbit)

One might assume that this is where the big gain could be made by starting in a polar orbit. But that doesn't have as big of an impact as one might expect.

I'm not going to do the math on that, but I'd wager the difference in required delta-v when you start in polar orbit or an orbit that's on the same plane as the Moon is less than 1%. (The Moon orbits at an inclination of 5.15°)

To transfer to the moon you need to time your transfer burn just right. A bit too early in your orbit and you arrive behind the Moon, a bit too late and you'll be too far ahead. 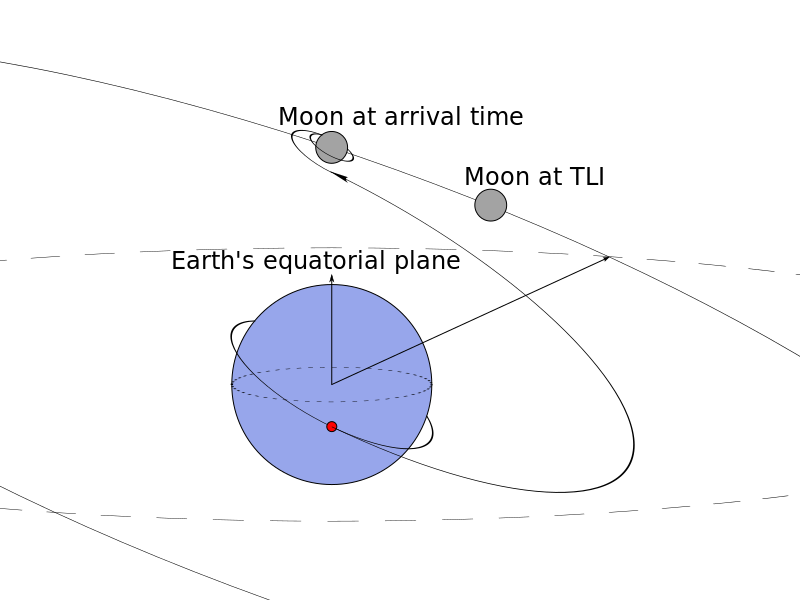 In an orbit that is on the same plane as the Moon, the optimal transfer window would happen once per orbit of the spacecraft.

In a polar orbit you can't choose to launch behind or ahead of the Moon by starting the transfer earlier or later in your orbit, because your orbital plane is perpendicular to the Moon. This means transfer windows would only happen twice a month. Once on the "upswing" of your orbit and once on the "downswing".

Not the answer you're looking for? Browse other questions tagged orbital-mechanics the-moon trajectory or ask your own question.

5
How will Chandrayaan-2 reach a polar orbit?

11
What does the BackFlip lunar cycler do in its pass by Earth?
8
Is a manned craft powered by Solar Sail feasible from Earth Orbit to Lunar Orbit
26
Can a satellite orbit Earth so that it always has the Moon in line of sight?
6
Could a (differently) inclined orbit remain above a Lunar pole half of every revolution?
1
Did ISEE-3 spend a few years in a halo orbit around sun-earth $L_1$ without using any fuel?
15
What is the most fuel efficient way out of the Solar System?
1
what are various best practices/processes associated with orbit change manoeuvres of LEO / GEO satellites?
5
How will Chandrayaan-2 reach a polar orbit?
2
Why aren't satellites launched into a Polar LEO to get into Polar Heliocentric Orbit?