What are some common (but non-obvious) materials that are particularly unsuitable for spaceflight?

If a product was to be made for use in space, there may be certain materials or certain combinations of materials that might work well on Earth, but be particularly unsuitable for spaceflight applications.

One example that comes to mind are the protein cubes or bars described in the Andy Weir Novel The Martian and to a lesser extent in the film adaptation of the same name, where the simultaneous combination of high G-force and vibration caused the material to dramatically change it's mechanical properties. The phenomenon is described further in Quora and a KSP forum.

So materials that turn to goop during launch (and I mean the protein in cube form, not human form) are automatically out as a class.

But are there others that turn out to be handy on Earth but unsuitable (and especially those that might be unexpectedly so) in spaceflight, so that they would fail either during a cargo delivery or while in microgravity in a commonly used space environment for astronauts?

Any material that outgasses should not be used in a spacecraft. Though this could be a lesser problem for human-flight within a controlled atmosphere.

Any material that is prone to whiskers in soldering also needs to be avoided.

One example that comes to mind is cadmium, which was prohibited in some NASA standards.

Another common complaint is about titanium, which allegedly does not disintegrate in the atmosphere, thus being dangerous to use.

This provides a starting basis for some materials that are banned for space applications. As to what is a good material, that would be a case-by-basis and application-specific analysis.

Granular salt and pepper are not suited for use in free fall because the grains can readily escape and get in crewpersons's eyes and/or nostrils.

To get around this

Polyethylene dropper bottles contain bulk supplies of liquid pepper and liquid salt. The pepper is suspended in oil and the salt is dissolved in water. 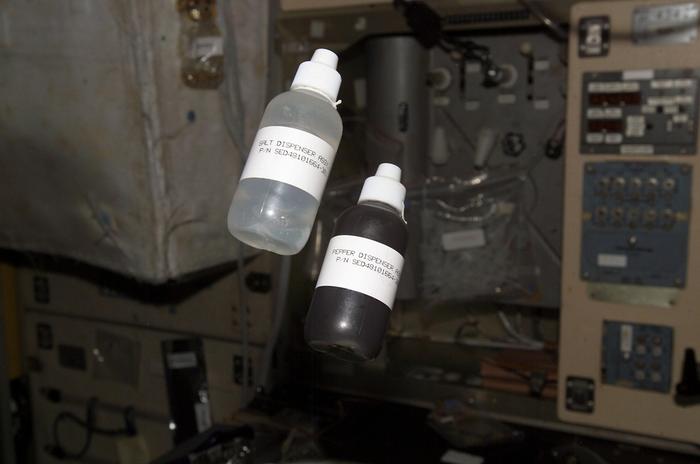 Not the answer you're looking for? Browse other questions tagged materials technology safety or ask your own question.

41
Are there foods that astronauts are explicitly never allowed to eat?
5
Dried beans, rice and oats, jerky, olive oil, salt, vitamins, electrolytes, water; anything else?
5
What coatings are used for printed circuit board protection in space?

8
What source of raw materials could be found in space for making plastics?
19
What materials are the windows on the US Segment of the ISS made out of?
9
What are the common space application adhesives used in Earth orbiting satellites?
7
What are the issues and concerns related to turbopump blade cracks and manned spaceflight?
3
What are the choice of materials for LOx pumps casing and impellers?
16
What are the long term effects of Space Weathering on man-made materials?
2
What advances are there in heat-resistant materials for engines?
9
What are beta cloth and beta marquisette, materials used in Apollo-era space suits?
4
What sorts of flexible materials are best for use in space (particularly on the moon)?
20
What are some of the obsolete technologies that space agencies used in day-to-day work during the 1960s?