What would be the minimum energy trajectory for an inbound intercept course for another body?

Let's say that you have a body inbound to Earth, and you've got plenty of time before it is within range. But you want to intercept it at minimum relative velocity, e.g., you're going to land on it or dock with it. Maybe you want to transfer fuel to a crippled inbound craft.

What are the orbital dynamics of this? It seems like a highly elliptical orbit with the inbound body's trajectory intercepting the inbound leg of the ellipse like so: 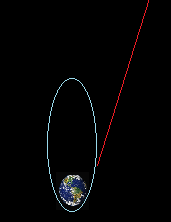 Is this a good idea? Is there a name for this approach?

Also, what are the limits of this approach? Presumably there's a maximum inbound velocity or there's no elliptical orbit, there's just escape velocity.

I'll assume the chaser (the active vehicle) is already in some orbit about the central body and that the target is in some other orbit about that central body. Given a time $t_0$ at which the chaser makes an impulsive maneuver to transfer to the target and a time $t_1 > t_0$ at which the chaser is to reach the target, there is always at least one conic section that has the central body as one of the foci. At the end, perform another impulsive maneuver to bring the relative velocity below the threshold value. Finding these conic sections is Lambert's problem. Voila! Intersect solved!

The choice of $t_0$ and $t_1$ might well be suboptimal. It might require, for example, a trajectory that exceeds the speed of light (exceeding the speed of light is not a problem in Newtonian mechanics) or a trajectory that intersects the central body. There might well be a better choice. So, rinse and repeat with different choices for $t_0$ and $t_1$. Now you can generate a contour plot that shows cost (using on some metric of the two impulsive maneuvers) versus the times $t_0$ and $t_1$. The result is a pork chop plot: 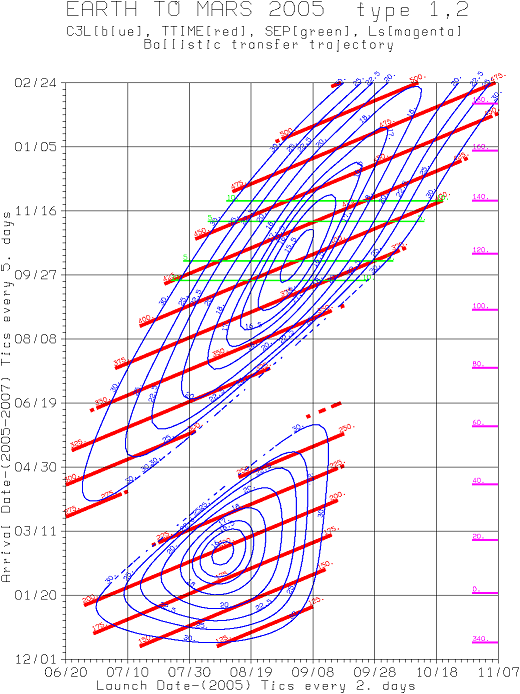 The above shows the costs of various transfer trajectories from Earth to Mars. Some choices of $t_0$ and $t_1$ are obviously better than others. The costs vary by orders of magnitude in the case of transferring from Earth to Mars. (The plot does not show the ridiculously expensive transfers.) There are two optimal routes, a "short way" that leaves in early August 2005 and arrives in late February 2007, and a "long way" that leaves in early September 2005 and arrives in early October 2007. These are the two bullseyes on the plot.

12
Could Earth-lunar flybys be repeated consecutively without the use of propellant?
9
What is the smallest body that has sufficient gravity for another body to orbit it?
11
What does the BackFlip lunar cycler do in its pass by Earth?
5
Intercepting an object on flyby past Earth?
10
Thrust and rotation strategy to circularize a standard GTO orbit using ion propulsion?
7
How to optimize time of ignition for an on-orbit burn and/or coast phase on ascent?
4
Question about orbital mechanics and trajectories for a space infrastructure project/climate adaption idea
2
Using Space Stations in fixed orbits instead of Space Ships for the Whole Journey