How was temperature and humidity maintained inside the Apollo mission capsules?

What mechanism was used to control the temperature and humidity inside the Apollo mission capsules? For example, did they employ an electric heater? Did they utilize solar radiation? Was humidity artificially controlled?

An electric heater might be the most convenient, yet seems like a scary option in a cabin using 100% O2 atmosphere.

This is a follow up to my earlier question, "What was the approximate cabin temperature and humidity of the Apollo mission capsules?" which found that the intended "temperature was 70° to 80°F" with "relative humidity of 40 to 70 percent" according to NASA documents.

I am trying to understand how artificial atmospheres and the technology that maintains them has developed over time.

The problem with manned spacecraft is not normally keeping the cabin warm; rather it is rejecting the heat. The tiny pressurized bubble of the spacecraft is surrounded by the perfect insulator, vacuum. All the power generated by the spacecraft and by crew metabolism ends up as waste heat and must be rejected into space to maintain a comfortable temperature.

(You may recall the crew in Apollo 13 getting cold, but recall that in that case, the spacecraft was powered down to below emergency levels.)

The major source of humidity in the cabin is water exhaled by the crew; a certain amount of it must be removed to maintain a comfortable humidity level.

NASA refers to the system which removes carbon dioxide and cools and conditions the air as the Atmosphere Revitalization System (ARS), and the heat rejection system as the Thermal Control System (TCS). I will concentrate on the ARS in this answer since that seems to be the focus of your question.

The ARS systems for the Apollo Command Module (CM) and Lunar Module (LEM) share the same functionality. The Shuttle ARS also looks very similar. The main difference with Shuttle was that the suit interfaces were not such a primary feature of the system, since the crew was not expected to remain suited for a high percentage of the mission.

A schematics of the Apollo ARS system is shown below for the LEM. The CM system performs the same functions, but I could not find a nice schematic that wasn't over-complicated.

Oxygen (Cabin Air) is drawn into the system from the cabin (6), passes through canisters which remove carbon dioxide and odor (4), and is circulated through the loop by fans (1). The oxygen passes through a heat exchanger (2) where heat is rejected to the spacecraft TCS. The cooled oxygen then passes through water separators (3) for humidity control - these are essentially specialized fans that centrifugally remove the water. The water is sent off to storage. There is then an interface with the suit loops (5) and the conditioned air is returned to the cabin (7). 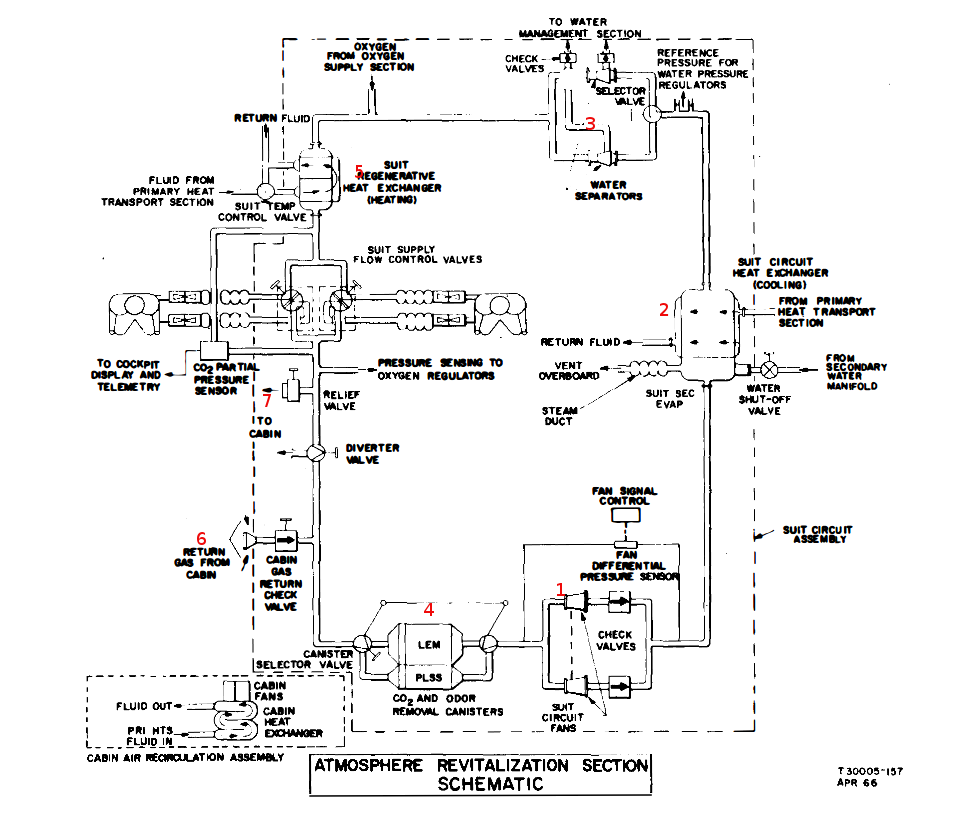 The LEM schematic is from the LM Orientation.

Command Module information is in the Apollo Operations Handbook.

Temperature and humidity within the Apollo Command Module was controlled with a system of heat exchangers, electrical heaters and water-glycol (62.5 % ethylene glycol and 37.5 % water) coolant loops. The coolant loop was used to cool the electronics mounted on cold plates and also the atmosphere of the capsule.

Different heat exchangers were used for cabin and suit oxygen circuits. The suit circuit heat exchangers removed also excessive humidity by condensation. The condensed water was removed by a pump from the exchanger and transported to the waste water tank.

Excessive heat could removed by radiation. There were two space radiation panels at the outside surface of the service module at a 130 ° arc. If one panel was exposed to the Sun, Earth or Moon, the other panel exposed to space was used instead. Each panel could remove up to 4,415 BTU per hour from the coolant loops, that is 1,294 W of heat energy.

All information from a NASA paper titled, "Environmental Control Subsystem".

Not the answer you're looking for? Browse other questions tagged crewed-spaceflight apollo-program or ask your own question.

25
What spacecraft control is Margaret Hamilton pressing in this picture?
19
What was the approximate cabin temperature and humidity of the Apollo mission capsules?
13
Decision Factors for using 100% $ O_2 $ cabin atmosphere in early US space program
6
How cryogenic oxygen was heated up for CM cabin repressurization?
0
Lunar module on the moon

37
Why did Apollo mission numbering skip 2,3,4,5 and 6?
21
Fortran and the Apollo 11 mission
12
Did early Russian capsules really have “Human Inside” labels?
19
What was the approximate cabin temperature and humidity of the Apollo mission capsules?
3
How was the Apollo IMU calibrated?
10
How was the mass of the Apollo CSM determined?
1
At what time in the Apollo 14 mission did the maneuver shown in this image happen, and what exactly was happening?
7
Were there any mission goals for the Apollo 18, 19, 20 flights?
6
How cryogenic oxygen was heated up for CM cabin repressurization?